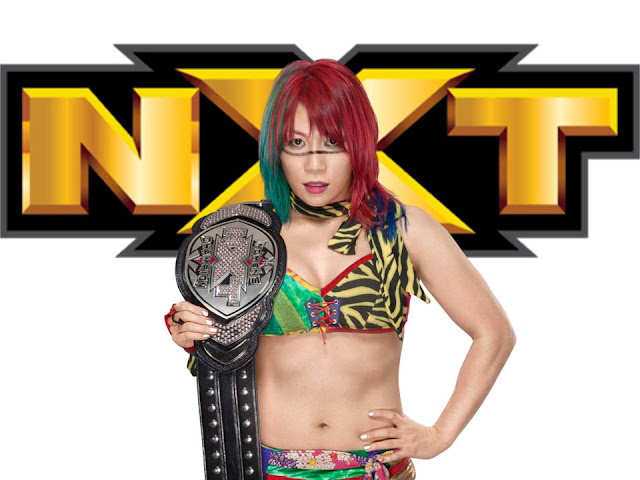 Many of us dream about matches that they wish to see on WWE Network, RAW, SDL and NXT...

We decided to put our top 5 dreamed matches on the line, everytime with different Superstar, (not only from WWE).

Our first edition is about Asuka (who else) the Empress of Tomorrow!

The extraordinary Japanese Superstar is the undisputed ruler of NXT's women's division and her reign is already the longest ever. We are not including Nikki Cross and Ember Moon, because these matches are 100% possible to happen in the following months. We decided to select 5 opponents for Asuka - from the past and the current roster and one exception. We hope that you will agree with us or you will share your own ideas on AWOW's e-mail - awowofficial@gmail.com or in the comments bellow!

Actually when we talk about Asuka, top 5 is not enough to fit all of the great opponents you can imagine her to face. But we'll try to make a good compilation.

So here they are: 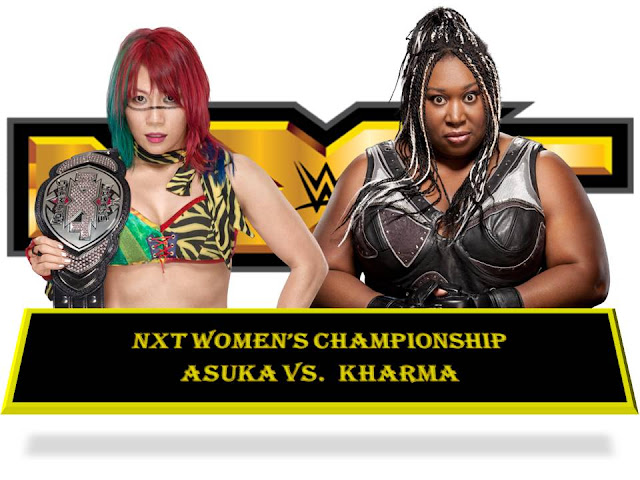 Kia Stevens also known as Awesome Kong is a legendary woman, with legacy of great matches in TNA and worldwide. For our sorrow (and the Bella Twins luck), her appearances in WWE was short and with lack of luck! As Kharma she was remembered as the third woman who had ever entered the Royal Rumble and as the woman who attacked random (then)Divas after their matches. Oh, and the one who can make Kelly Kelly to pee in her shorts, in fear!

There were rumors that Stevens has nothing against being signed to WWE. Obviously the problem might be in WWE, or the rumors are fake and Kharma is not that easy to be signed! You know that she was released from TNA, unexpectedly after a scandal with fellow Knockout Rebecca Hardy. Maybe she is a woman who knows her price and she doesn't want to be signed for a less money that she deserves or she has a terrible attitude (not the 1st with that issue to be signed), WHO KNOWS?!?!?!

But just imagined her signed to NXT. She will be booked against Asuka, immediately and at the first TakeOver, both of them will face each other in a one really challenging match, eventually for the belt! Come on Kharma is more destructive than Nia Jax, could ever be! This experienced woman is fearsome and talented. NXT is just the great opportunity for her, because it's a 'developmental territory' just formally, for the WWE Universe it's a third brand, sometimes even better than RAW and SmackDown! Most importantly - there is ASUKA!

If Kia Stevens be re-signed, the catchprase 'Nobody is ready for Asuka!' will be put on a serious test and the chant 'Asuka gonna kill ya!', will not sound that confident, as always! So we dream about this one. Of course many of us have watched Gail Kim vs. Awesome Kong battles and we knew that Kong is not unbeatable. We also know that Asuka is not the typical American female wrestler, who can be defeated with an ease and if we ever get the chance to see this rivalry it will not end with one match. So this Idea is really exciting. 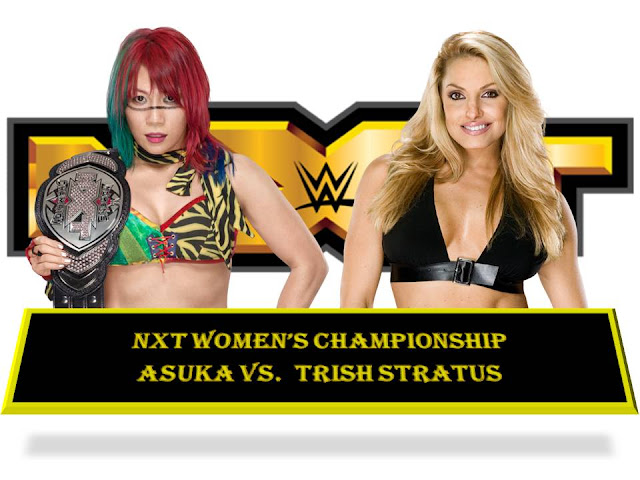 If Trish, ever decides to come back in the future, maybe it will be to face Asuka (and several other women's names come in my mind as suggestions)!

Actually this match was rumored as a first that came on mind of NXT's Authorities. Rumor that was denied by Triple H, later. But the idea, the dream about it stuck in our imagination... just imagine it: Trish is hitting the Chick kick, this might be it ... 1...2...Asuka kicked out! Asuka kicked out!... Asuka Lock! Trish is doomed! Noooo, she reached the ropes...

Just imagine it makes it taste so sweet! The Legend fights to see tomorrow against The unbeatable Empress of NXT, ...why not in Torornto?! This one will be an instant classic! 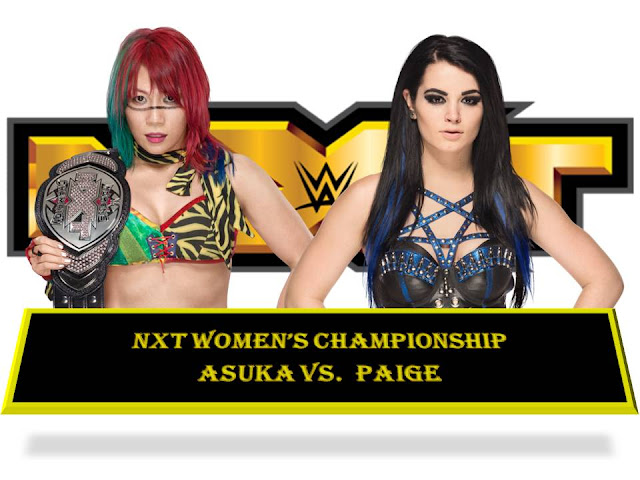 Poor, Paige! She is sooooo lucky that I and Tony Serano are not WWE Women's division creatives, because we have a lot of competition in store for her... in our imagination! 😀😀😀😀😀

The last months prior her suspensions and injury treatment, without watching Total Divas, me, my colleagues in AWOW, many of the analytic WWE Universe's fans could feel that there were some problems in her life that reflected her ring presentations. I am not talking about Emma's brutal win over her in SmackDown! When you are working in that kind of specific sports entertainment you must be prepared to be book to lose from time to time - It's in the name of the character, the push, the storyline. Paige knew that! The wrestling is a kind of well choreographed combat art, than real competition!

But what about the moment when you face someone, who comes from a different pro wrestling background? A total different style! Almost pure shoot wrestling! Wrestling so close to the near combat, that you can imagine! Wrestling, that is traditional for Japan and it's well presented figure - Asuka! You'll have to work really hard if you want to survive this collision! This is something that Paige really needs! A real challenge to take her away from the swamp of boredom, where she got herself. Asuka will bring that needed challenge for Paige and will bring the wild British girl to the ground in a very painful manner, because you must be prepared for a match like this, against unique opponent like this! I am sure that Paige will not be 100% prepared and match like this will be a real, even the greatest challenge in her WWE career! Both women deserve it!

On the other side, Asuka will meet a great challenge in the face of the Diva of Tomorrow (she desperately needs new nick name). The Inaugural NXT Women's champion against the Longest Reigning NXT Women's champion! That battle may be vital for both of them and may has the potential to be one of the best ever in the WWE and NXT's history. 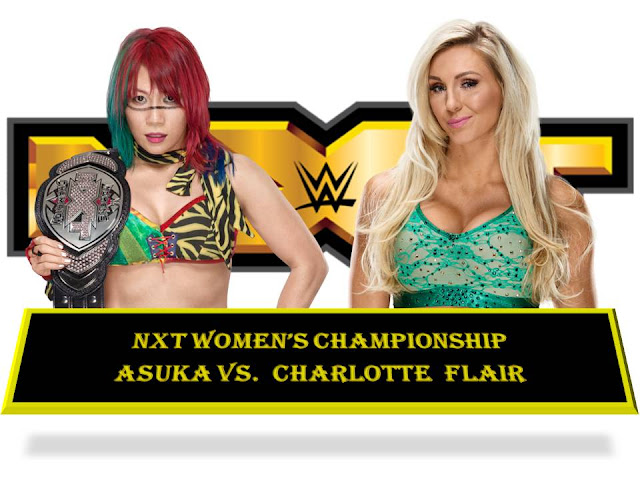 Some of you may say: 'Hey! This match has a 99% possibility, to happen!'. Even the previous one is possible to happen!

Well, I include this matches against Paige and The Queen of RAW, according to the 1% possibility to see Asuka stuck in NXT! Yes, it's another rumor that WWE had not having any plans to call Asuka and Shinsuke Nakamura to the Main roster.

It's a rumor, and I hope that it will not turn out to be true, because it will be sad to lose a talent like both Japanese sensations. So that's why I put this matches with the idea that Paige and Charlotte may go down to NXT, for a little trash talk and some huge, title match, clash with the Empress.

Many fans hate Charlotte Flair and will say that Asuka is going to kill her! Actually, no one has a doubt about this... but Charlotte is amazing and really improved talent. That battle will be a really challenging for both of them. Like it or not, but we must confess that Charlotte's rivalries and matches helped a lot for establishing of many fan-favorites women characters in NXT and WWE... The battle with Asuka will be a really nice and serious challenge for Flair and the Japanese Lioness.

It will be nice to see it happen any time soon, because both women are reached a sort of plateau in their careers - Asuka is stuck in NXT, without competition, Charlotte is stuck in RAW, without difference in her rivalries and fighting one and a same opponent every week! That will be a nice turn for both of them! 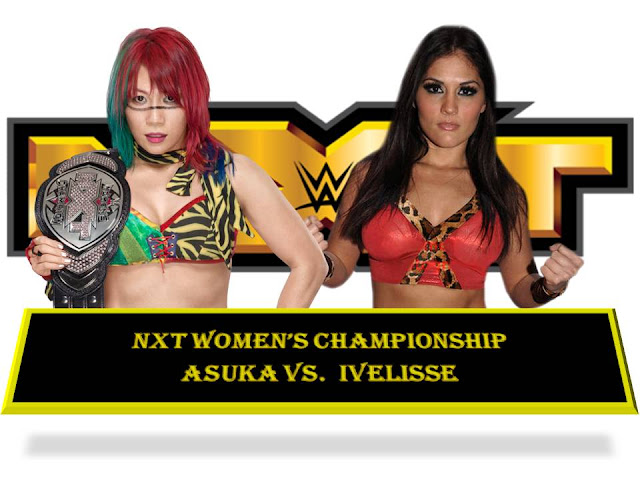 It was really hard to decide who I want to see the most, fighting against Asuka. This one is a 'pain in the ass' topic for WWE, who sometimes don't dare to revisit and correct their mistakes.

Ivelisse want it! Many people from WWE Universe and women's wrestling fans want it! I and AWOW want it! So who is standing against it?

Ivelisse Velez is someone, who you can't forget and someone who's desire and talent for wrestling you can see and feel! 'Bad Attitude' and 'fighting like a man' are dumb excuses... There are a tones of names in the current roster, during the past years who were famous to be 'Bad Attitude' embodiment, but meanwhile they were amazing wrestlers and wrestling characters.

Ivelisse fought many legendary indie workers. She fought over the world. Her experience is priceless. She is natural talent. Her move set and wrestling style is constantly progressive. She is a Cahmpion Material, without limits. She can be that 'Bad Bitch' or 'Honorable Chica' who fight for justice or for herself. Ivelisse is unique and talented. And she knows it! And there is a problem for WWE! They hate the idea of bringing any new talents indie legacy, to their company, especially if the talent is woman. They rename her and try to pretend that she never accomplish something else outside the WWE! The last couple of years they slowly started to put the new female recruits indie career on display on WWE.com.

Asuka and Ivelisse are women's wrestling revolutionaries on their own - in or out of WWE. WWE needs to face that reality and stop ignoring the fact that they had made a mistake by releasing a potential top competitor, not for a first time (for examples here is the short list of great names they released without thinking about the consequences and the fans rage/disappointment - Melina, Gail Kim, Chyna and etc.). So, now in the Age of the returns, the mistakes can be sort of erased!

Here are several bonus ideas for Asuka's opponents, two of them are just a dream, the other 3 not that far away as potential reality.

Of course we can add more like Beth Phoenix, Eve Torres, Jazz, Ivory and etc. We can even created a top 5 /or 10/ of funny/non-match for Asuka opponents. But we let this opportunity to you! If you have ideas for future top 5 and bonuses or your own ream vision about the current one, don't be afraid to write to us on Facebook -  https://www.facebook.com/awowrestling/  , post comment bellow or write on our official e-mail: awowofficial@gmail.com!