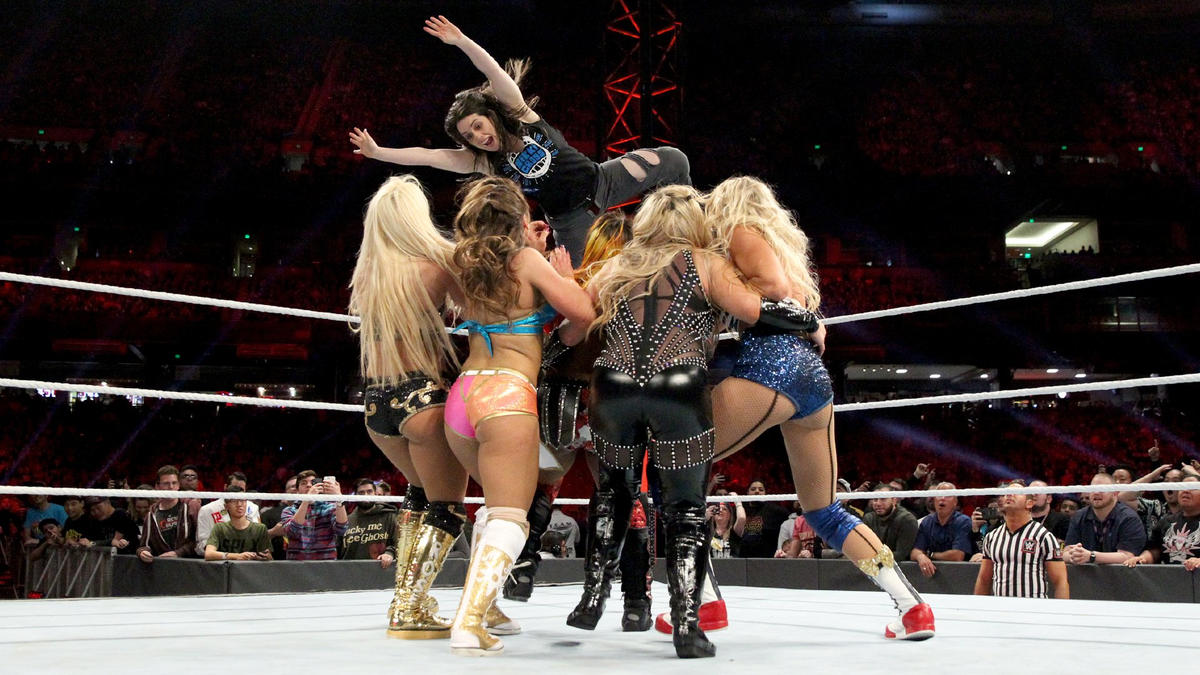 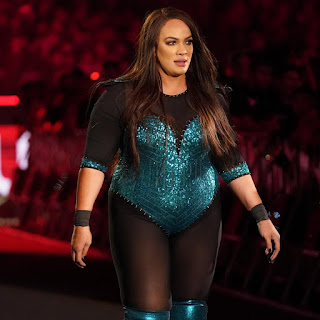 What is common between Chyna, Beth Phoenix and Kharma?

Many of you might be disappointed that there were no Trishes, Litas and Mollies returning this year! No legends, no Alumni! All female Superstars under contract!

When I open Wikipedia to see the table with statistic and who appeared in the match I was like "Ow! Ah! A lot of NXT!". That's nice! And then I got it! These NXT Entrants are the symbol of the future, with the two former NXT ladies who are now free agents. This year it's all about the future!

Well, we had several veterans. Natalya was the longest surviving woman in the match, with almost an hour in the ring since the beginning. We had Maria Kanellis entering the ring as #15, which was great and she really showed up some of her moves and the moment when she tried to work with Alicia Fox (another veteran), which brought some fun in the match. Then we had Foxy in her hysteria and craziness, after her captain hat were destroyed by Kanellis! And Mickie James of course bringing a lot to the table. I hope to see more from these girls!


The free agents - Lacey Evans and Nikki Cross were really impressive. It looks like they are ready to takeover WWE. The IIconics  brought some chaos and fun. Overall there were something constantly happening in the ring.

Naomi and Mandy Rose rivalry had it's place during the match, as The Glow eliminated the Gold Goddess and then Rose showed her thorns by eliminating Naomi. This is not over yet!

And then we have to talk about NXT, before we talk about the controversial ending of the match. Xia Li really brought her kicks arsenal and was interesting to watch. This year Kairi Sane survived a longer period of time in the match. The other non-NXT TV surprise Kacy Catanzaro was a really interesting addition next to Xia's appearance and both Performance Centre trainees showed a lot of talent. Actually, Catanzaro's elimination escape shadowed Naomi's attempt to survive elimination. That handstand walk and using the post to climb was really great display of athleticism.

Then we had Candice LeRae who really deserved to be pushed and that RR match entrance was a really nice gesture of respect for her from the creatives. The little blink at her rivalry with Zelina Vega, was great addition to the boiling in-ring action.

Last but not least - Io Shirai! The Genius of the Sky punished the Riott Squad and helped to normalize the situation building with the Riott Squad. Her Asai moonsault really clamed down Ruby's girls. There were a lot of good offense by Shirai and it was sad that her friend Kairi Sane wasn't able to work with her.
Oh, let us not forget about the NXT UK presence. Many of us thought that we will see Toni Storm -  the reigning champion, but we were surprised with the dangerous Rhea Ripley who was a dominant force, before Nia Jax's entrance.

Zelina Vega and Hornswoggle segment was funny and Vega's attempt to escape the elimination was a nice strategy. Strategy that didn't work as planned.

The Riott Squad were something like the Wyatt Family. They dragged competitors from the ring and beat them down, starting with Charlotte Flair. Of course that strategy didn't last long, thanks to Shirai and Bayley put an end of the riot, eliminating the leader Ruby Riott for good.

Until the last entrance we had a bunch of names - Bayley, Charlotte and Alexa gracing the ring and bring action. Ember Moon was impressive throught the whole of the match as well, and we know that she was cited as one of the potential winners next to Charlotte and Carmella. The Princess of Staten Island was in her best shape. But Nia Jax was dominant!


Well, then we had Lana's situation. The opening of the twist! I don't know how to describe this. Poor Lana was injured during her husband's match earlier in the night, then hobbled to the ring. She didn't get far when she was attacked by the entering Nia Jax, then replaced by The Man! It was really controversial. Lynch had her moment earlier and going on and stealing someone else's. I don't know! I have a drop of mixed feelings about that.

Ending the match with the rivalry, that was epic in 2018 was kind of interesting decision. I might call it 'great' if Lynch was an official entrant not last minute replacement. After Nia Jax's elimination the ring was clean, and we had a drama with The Man's injured knee (Jax didn't go away without doing some damage). Charlotte's aggressive attacks at the beginning were so heated and so real. The facial expression of the Queen, told a story on its own, while she punished her nemesis.

And then The Man eliminated the Queen and we had sort of too much Becky for one night. Too much push for the Man! Now she has a match at WrestleMania guaranteed and I don't know maybe she will face Ronda Rousey for the Raw Women's title. They have a date, that was delayed! Meanwhile she could continue to mess around with the SDL women's division - maybe Lana will ask for retribution and Charlotte will chase a revenge opportunity as well! The Queen had that match in her hands!

Until we see what happened I am having kind of bitter taste in my mouth, no matter how great the match was. It was really good showdown with a lot fun, action and twists. Even the end was a result of a twist. But it was sort of push for Lynch! The push to WrestleMania match! I am not that excited! Happy for her, but not totally happy!

ROYAL RUMBLE RESULTS 2: THE BOSS FACED THE MOST DANGEROUS WOMAN ON THE PLANET 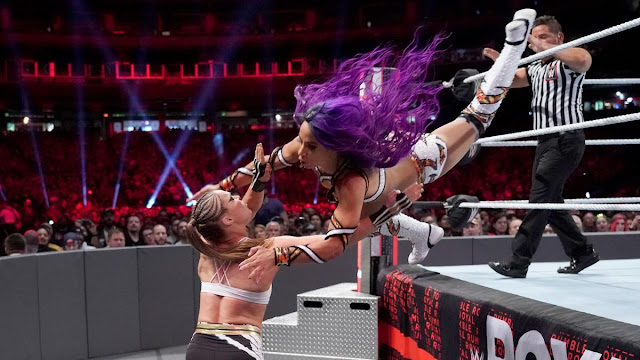 ROYAL RUMBLE RESULTS: THE EMPRESS COLLIDED WITH THE MAN TO RETAIN THE GOLD 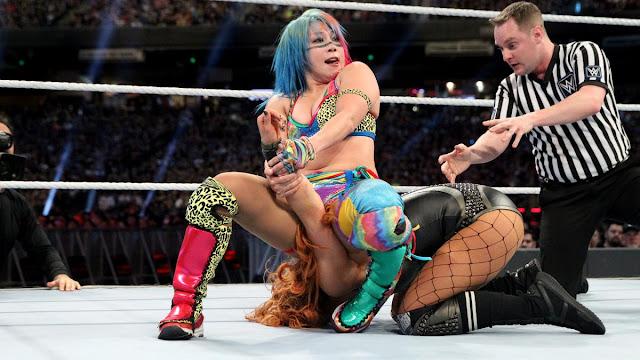 What started as a super technical match, quickly turned into a battle of the Titans!

A lot of reversals and some fresh moves applied in the corner of the ring or in the ropes. The match looked well at the beginning and it was what we all expecting from the Blue brand's Superstars - a technical battle. Reversals of the finishers and a lot of damage on injured limbs... Classic formula for successful match. 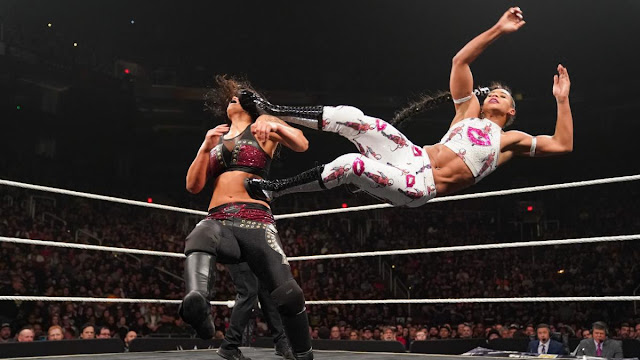 Waste of a match? 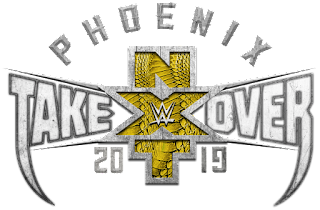 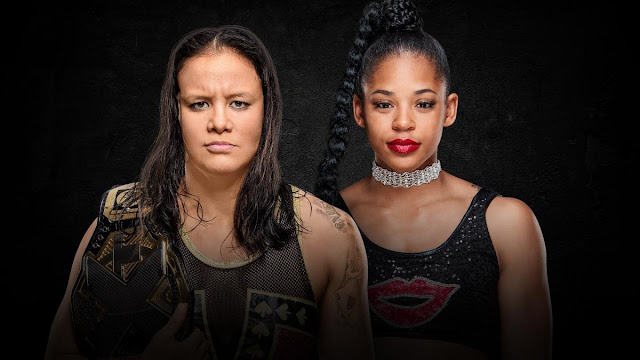 Finally! The EST has entered the title picture and there is someone who can make her work hard for her money!

Bianca Belair's reputation is ahead of her. Long before her TV debut, she was one of the most presented recruits training in the Performance center. The fastest, the strongest, etc. You know it. Actually she has only one loss, prior to her NXT TV debut and roster inclusion - where she lost to Kairi Sane in a really stunning match at the inaugural Mae Young Classic in 2017. Since her NXT debut, she has been undefeated.

But, there was another undefeated Superstar before her, and since the Empress of Tomorrow had her first loss at the Main roster, Belair might face her first loss sooner. However, she is someone who can take a appropriate stand against the current champ.

Love to hate her (gimmick/character)! From the beginning she stunned me with her presentation of skills and gimmick. I just started to hate her, as a bully, forgetting that most of this in-ring presentation is booked. Well, I think she has some of her character traits in her real-life identity, because she plays it too natural. Overall, Baszler is dangerous and strong as champion, with or without Marina Shafir and Jessamyne Duke, by her side. She proved all of her doubters wrong when she defeated her MYC rival Kairi Sane to become the first-ever two time NXT Women's Champion.

This is going to be a thorough fight. I hope that the booking team is planning a bigger time-slot for this match.

I am willing to give 51% to Baszler. I am not sure that Belair is suitable enough at this point to be crowned as champion. Not because she don't deserve it. NO! There is no story in here. It was a quick #1 contender selecting with a small in-ring segment, with a slap! For me, this story must evolve and Belair should return for a second shot at the title. That will be more interesting and will be a base for a nice rivalry, between the two. Meanwhile, Baszler may defend her title against Mia Yim who is really hyped and suitable opponent, especially, after their Mae Young Classic match in 2017. I think that no one will refuse a rematch between them on TV.

Bianca can prove herself and earn more heat by facing Kairi Sane and Io Shirai, mostly Sane who is suitable to job, in their own MYC 2017 rematch. That will be a good preparation for eventual second round against Baszler. We are not excluding the possibility for her to win TakeOver:Phoenix's title match, but ... seriously, they can invest more time into this one. To develop it for Belair and Baslzer's good. For fan's good, as well!

So our Prediction's Score is:

How lucky are we! Not only do we get the Women's Royal Rumble, but both Raw and Smackdown's Championships will also be contested. 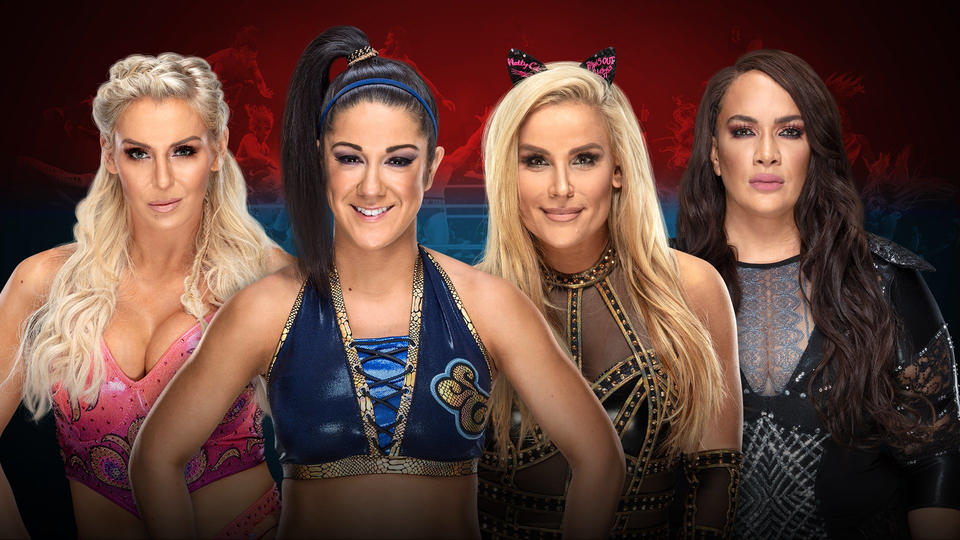 Growing up, one of my favorite matches was always the Royal Rumble. It had everything in it; surprise entrants, the new guy who always comes in and battles everyone, along with the story told throughout the match, letting you get behind the winner.
Read more »
By George Loveland at January 25, 2019 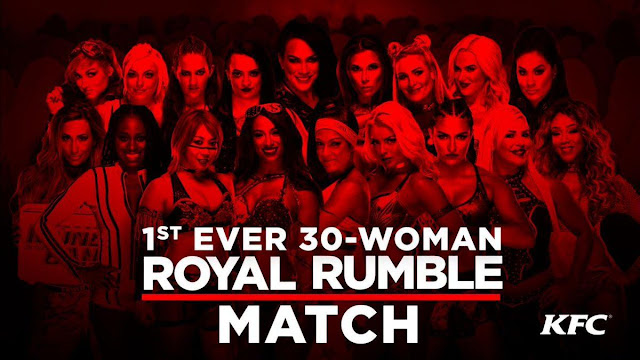 Before we set our sights on 2nd Women's Royal Rumble match, let's have a look at the historical, inaugural last year's edition. Several quick facts about it!