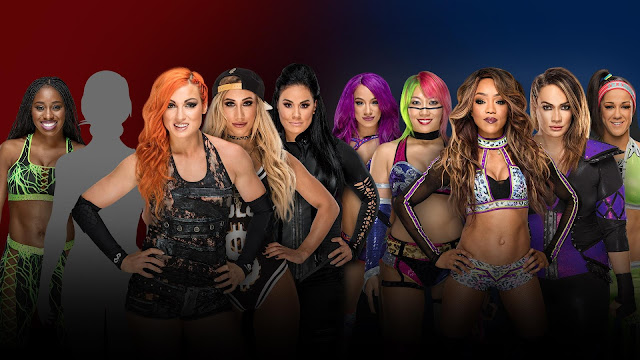 For us, this one is always an interesting match at Survivor Series!

I just looking forward to seeing it!

Especially with that free spot in team Blue.

Team Raw has a really good selection leader by an unexpected leader - the Crazy Fox! Its build-up was followed week after week and Bayley struggles to win the spot was the end of the Team-building drama.

As we said earlier - we are happy for Alicia Fox push. She deserves some attention after a decade in WWE and one title reign. That was a pleasant and fresh choice, for a difference. As Captain, she is still that Crazy lady, who is so serious about her team. She even leads them in the raid this Tuesday. I think that she will have some good moments in there. I think that she will be eliminated, in the middle of the match.

Sasha Bank is another Superstars, who needs just to show up, to get some positive reaction. Banks won several matches against the current Captain and it will be interesting to see her appearance this year. Her over-emotional behavior can cost her an elimination.

Bayley is here again, but I'm not sure if she is going to win the match, this year. Her journey to the team was long and painful. Like match with Nia Jax. Bayley will do some things, but this year the focus is on someone else!

Nia Jax is one of my favorites! Last year she was eliminated by Becky Lynch. This year I hope to see Nia bringing the destruction... the total destruction to the ring. I hope to see her eliminating someone with that amazing rolling senton, she didn't use since she premieres it on Emma, om Raw! I just love to see her helping for the win!

My bets are on Asuka! No one can beat the undefeated Empress at this point! It's too early to see her streak ending. She needs some more victories, to establish her as a solid Main roster performer. So, we think that Asuka is the key for team Raw's win!

Team SmackDown lost one of its top members and now the things are not that 'pink' for them!

Last year it was Becky Lynch who survived to face Charlotte and Bayley and to lose to the Hugger.  And there was an intrigue before the match - the mysterious attack on the then Captain - Nikki Bella (it was revealed that attacker was Natalya, who was the coach of the team and took Bella's place). At the beginning of the preparation for the team build -up, the things looked clear -  Team Blue was announced and it looked more stable than team Raw. But Charlotte's last moment title win, bring some important changes -  believe me, it's really controversial and important who will take Flair's place! Yeah, at first sight, it looks like a something you can deal with, but we are sure that there are far deeper plans, behind this change!

This year Becky Lynch won the right to be the Leader by smashing friend and foes. She is a good Captain, but I don't think that she is able to bring the team to the top! I can't see her as this type of leaders who can lead you to the top, despite the respect and the motivation speeches! Yeah, they will work far better than Raw, but - there is something in this team, in the captain, that make me things, that this will be Lynch's hardest match this year and bloody loss.

Naomi was smashed by Nia Jax, last year, so she will definitely searching for retribution and maybe she will be Jax's nightmare this year. Actually, Naomi's career took a really well-deserved turn in 2017. Women's title wins. Her new Glow gimmick is really working and she has nothing left to prove. At this point, she can be a good contender for the women's belt and good opponent for many other Superstars, who needs elevation. For me, Survivor Series is not that important for her career. It's good as an appearance and chance to perform in PPV, but nothing else.

Tamina missed last year's elimination match, due to injury, that kept her away from the ring for a very very long time. This woman is so underrated so, she is ready to work with anyone, just to be in the ring where she belongs. The ring she loves and you can feel, see that love behind her silent, stone face! I remember her rivalry with Beth Phoenix and I think that this was one of her best moments. She was so close and at the same time far away from the then-title. Knee injuries are serious guys! I can see Tamina bravely fight, week after week, but there is a constant threat for her. I hope to see her working as always on 100% because she is an amazing worker -  so professional, so naturally talented, but I don't think that she will 'survive' the match.

The Wild Card! The woman who can change the Champion vs. Champion match in the last minute! Carmella! I am so happy that she and the SDL women's division kicked James Ellsworth (who is Alumni, already) ass/balls! But most importantly I will not be surprised if after her team lose, we see her cashing in and even win the belt, pinning the exhausted Charlotte Flair! For me, Carmella is a really good competitor, but her role in the traditional 5-on-5 elimination match will be like the last year's role. To fight and fall... For me, her Miss Money In the Bank status is the more important part of it! I really starting to think if this Sunday night is the night of The Princess of Staten Island? Imagine it: After the clash between The Goddess and The Queen, the Princess steal the fame! Not a bad idea at all!

Who might be the mysterious woman who will take Charlotte Flair's place in the team?

We have several ideas: from the obvious to the craziest!

It's logical to put Nattie in the team. To switch places. But it's too predictable and ... boring (the decision I mean)! Sorry! I love Natalya's work, her limitless love, and dedication to wrestling and WWE, but I don't want to see her in the team! On rematch - yes! In the team - totally NO!

The Ravishing Russian is someone, who can join the team! Luckily for me, she works hard and didn't quit her wrestling career, in the face of the first trouble. I enjoy her work with Charlotte. Her work with Naomi wasn't that bad. So why not?

I think not! Too obvious! We need something more shocking... Someone who can shake the ground!

Yes! She's still a part of SDL's roster and there is no small chance for her to make another surprising return. But, she's not our choice! I am hoping to see someone else. Nikki is really one the faces of WWE overall women's division, but I think that she is not that suitable for the team. Yeah, her return will be nice, but we hope for something more shocking!

Rumors have circulated around the wrestling news, that Page may be transferred to the Blue brand (too late guys, after you release her 'boyfriend' from there). Actually many people are dying to see Paige competing (For me it doesn't matter that much where. Maybe in Raw to face Asuka and Nia Jax, and then to SDL). Many people dream to see her in Tuesday's nights on TV.  It will be a shocking surprise, after her appearances backstage on Raw, but it will worth it!

Someone from the past!

Too many great names of former female talents are popping up in my mind! Names like Victoria, Melina, Michelle McCool... women with strong tights to SmackDown's brand. The idea of returning someone from the past is always good! So we are ready for this too!

I love this traditional elimination matches at Survivor Series! They brought some focus on the women's division from a long, long time. This is the time of the year, when many underrated Superstars, may have some chance to appear at PPV and do something on their own.

I will love to see team Raw winning this because they need it! On the other hand, we are sure that this year the match might be even better than the previous one.

So, we can't wait to Sunday!