THE STAGE IS SET FOR A TITLE MATCH 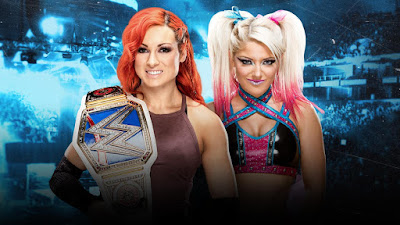 Prior Survivor Series, at November 20th, 2016(Sunday), at the award winning WWE Network, we will see another important battle!


Actually, the weeks prior Survivor Series are dedicated of cleaning the relationships between the teams members, fixing up an old rivalries and problems, like someone who wasn't able to compete for the championship belt in her brand, to receive the desired shot.

RAW women's set the stage, for a SMACKDown Live Women's title match. Actually, that match is far more important and tonight it will be back and fort for battle for the both women.

Let's start with the #1 Contender:

Alexa Bliss is someone you should not cross! Especially if you are not The Irish Lass Kicker :)! The push we are witnessing is well deserved, despite haters and troll denial of that fact. Alexa proved herself time and time again in NXT, and despite how some people want to persuade us, that "what happens in NXT stays in NXT", NXT is equal, sometimes even better to WWE's main shows. Now she is where she belong, bringing some new blood, to SDL's women division. Many people are not agree, that she deserved that shot, I think that I'm OK with it, as my colleagues in AWOW are. Alexa win it after a hard fight and tactical maneuvers in a battle of established names. I am so happy with the fact that SDL's creatives decided to bring some action, out of the traditional battle of the famous veterans! I am worried what role, the high expectation, will play in Bliss performance tonight! This will not be a Alexa vs. Bayley! It's a total different game, but we hope that she will do her best.

About the Champ! I don't know what else I can say about Becky Lynch - she's great, she's talented, she's charismatic, she's amazing and unique! Really good addition to WWE and its Blue brand.

I am 98 % sure that she will retain her belt. For me and my colleagues, after discussion, it's obvious that it's early to have a new champion, eventually. But on the other hand we have two on two heels vs. faces situation (I am not counting Eva Marie. She's a wild card.) and it's a little bit confusing, because Lynch is well established face and there must be a solid heel who will take the belt or it must be some sort of multiple people match type, like triple threat to see a face as a new champion. Alexa is really good villain and she received a lot of heat and desired reaction. But is it enough?

I think that SDL creative team was having a serious dilemma and I am sure that they are already decide who will win, tonight! So, I can't wait to see the results tomorrow.
By S.K. at November 08, 2016