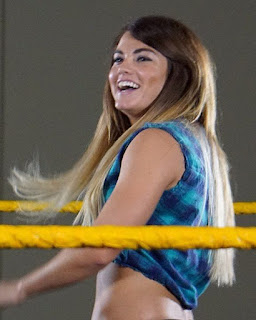 Yes it is a sad fact! The Tough Enough female winner was not successful in earning some wrestling fame!


Sara Lee was released from WWE and she announced her pregnancy at Instagram. Maybe that is the only good news about her. Congratulations for the future motherhood status and sorry for your release.

It's sad, because we didn't have a chance to see her in action on TV. The runner-up Mandy Rose did that successfully, but Sara failed.  She competed on several events and somehow WWE NXT and Performance Center didn't see her wrestling potential and didn't let her compete on TV taping.

We wish her a lot of success in the life after WWE and who knows, we could see her in TNA (like other former Tough Enough female fellow competitors like Raquel and Lauren Van Ness), after an year absence.
By S.K. at October 03, 2016