Better be later, than NEVER!

But, what do we mean with this word 'dissected'?

Well, we'll make a analysis on everyone's appearance in that match, by trying to 'dissecting' it on a three parts and viewing the role of every contestant. We'll end with Overview!

For several weeks in a row we saw that the rivalry between these four women evolved and got heat!

Asuka really needed that challenge to show everyone that she had no competition in NXT in the face of Kay and Royce, eventually Cross, neither the other two girls Aliyah and Liv Morgan. Ember Moon is different case!

No, no, don't get it wrong Billie and Peyton are great and they deserve their award for Breakout Stars of 2016! They are really talented and experinced girls and we love them (some of us). But to be a NXT Champion via defeat of Asuka -  it was too much for them, at this point. But their sneak attack in the middle of the storyline, worked well for them and for hyping this match.

Nikki Cross pre-match involvement, for me was a piece of art! While Kay and Royce entered the rivalry with a lot of speeches and fights as villains, Nikki, who character evolve with every appearance, make it silently and psychotic. She entered that title opportunity with exchange of crazy smiles backstage between her and Asuka, who promise us a lot.

Asuka entered this short rivalry, eventually in her manner - 'I want challenge! I want to restore my honor! I want them all!'. Since her championship reign is very controvercial, her title retains are mostly at Takeovers and house shows, Asuka really needed that multi-participants battle with some of the best in her division. This was more for the other women involved than for Asuka.

I don't like to analyze wrestlers entrance, except if they are annoying  and this affects their characters.

The entrances of NXT TakeOver:San Antonio, was the entrances of every other show they do. Asuka's was powerful as ever. Billie and Peyton's was sort of gracious. Nikki's... she was so natural and wild, laying down on the ring like a wild animal, waiting for a strike.

I have waited to see some tension between them. Actually there was a moment where the things looked like they were going to start to beat each other, but that moment passed away!

Actually, this is really rare form of presentation of a fatal-4-way match that involved allies in it. Last year Emma and Dana Brooke exchange some rude words and pushes in this sort of match, like many others before them. Well, Billie and Peyton didn't jump on each other. They prove that their friendship or alliance is more powerful than a title opportunity! That was something really fresh.

They worked together all the time and that amazing aided suplex, they delivered on Nikki Cross, through a table was really nice. Actually Billie Kay and Peyton Royce were more active than we expected. Yes, we expect them to stay outside of the ring and wait until Asuka and Cross, tear themselves apart. But they didn't! And that was another pleasant surprise!

They worked as a team all the time and that was sort of annoying, BUT they stated that they will co-own the championship if they won! So it wasn't unexpected, if we stop and think about it.

Actually, I am so happy for Nikki's push. She deserves it. She prove it in this match, within the small amount of time, that it had.

Nikki stayed in character and delivered some good offense against Asuka. Her fight with Royce and Kay was good. That diving crossbody performed on the Iconic duo, was perfect. That neckbreaker on Asuka, from the ring post to the floor was great.

The fact that she was taken off, before the end and her smile, when she saw Asuka leaving the ring as Champion, speaks a lot and maybe it's not over. I want to think that they might allowing Nikki to face Kay and Royce, before her second title shot!

There is nothing new that can be said about The Empress Of Tomorrow. She is a great competitor and her hits are well calculated and at the same time more realistic, that the worked out US wrestling moves.

Asuka is undoubtedly one of the greatest. Her role in this match was to help the other three women to develop their characters and to put some of their skills on display. All of the time Asuka was there, where she was able to be and that simple quick kick to Royce's head at the end was a sort of raw finish of the battle.

Putting Kay and Royce on top at the end, after they eliminated Nikki Cross in a sort of spectacular manner, was good for both of the Iconic duo.

Giving Nikki Cross some spotlight was nice for her too.

About Asuka leaving the ring as champion again- well, this leave the door open, if not for Royce & Kay, it's open for Cross, for sure. Actually, many people are disapointed by the fact that we didn't see Ember Moon in the #1 Contender's spot. But after the TakeOver I can see it clearly, why they are not in a hurry for this battle. They want us more hungry for it, in the same way they made the WWE Universe hungry for Emmalina's return, for Bayley's RAW Women's Championship reign...

Overview
Limited. This is the word that circulated in my mind, during all of the writing. It's bothered me. It's like a alert.

The women looked a little bit robbed. They were put between the NXT Tag Team Championship and NXT Championship matches, and their match was sort of a quickly packaged content (when that's not true), for a break between two dynamic men's  events.

These women are capable of more. All of the time you have the feeling that they are not allowed to show more. They put one-two spectacular moves, like Widow Peak, ring-post Nackbreaker, Triple German suplex, aided suplex through a table and all of the time you have that specific taste in your mouth... that feeling that this is the top of the iceberg and there is a lot more to be seen.

The match was nice. It could be even better. It  place in the card  was not in it's favor. Maybe the timing was not in their favor too. The match was good and it had its moments, but it's not like Bayley vs. Sasha Banks matches. I hope that Ember Moon vs. Asuka will be far more better and historical! The biggest plus for NXT was that they show four experienced, former indie workers in one ring, as embodiment of the sentence the if you work hard Dreams come true! 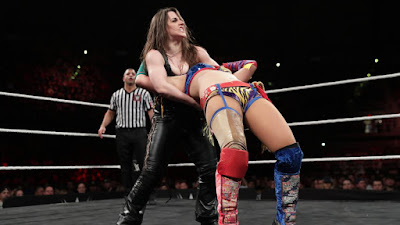