THE IMPORTANCE OF ROSEMARY VS. LVN TOURNAMENT FINAL MATCH 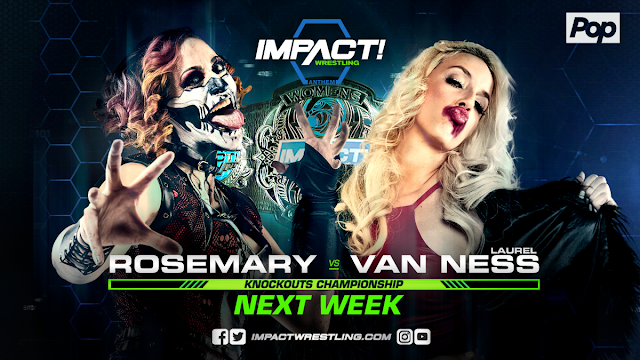 The history of TNA/Impact Wrestling/GFW Impact Knockouts division is one of the hardest journeys. While WWE had their Divas and Women's belt, with history of over decade, the things in then-TNA, wasn't that bright for the female wrestlers.


The KO title was founded in October 14, 2007. That is the year when the exact KO division was established around Gail Kim and Jacqueline (former WWE then-Divas). So, maybe Gail Kim is angry, but WWE helped TNA to create a competitive roster of female talents. An yes, many of the then Knockouts were on some point related with WWE (not all, but many - Gail Kim, Jacqueline, Velvet Sky, Angelina Love).

Today the KO title is a controversial belt, won by 80% of the women in the roster most of the time. We are witnessing a moment of greatness surrounding the belt when women like Kim, Taryn Terrell, Awesome Kong, Tara, Love & Sky and Madison Rayne competed in a extreme matches for it and a moments of deep disappointment when real talent like Cherry Bomb (Allie) was forced to lay down for 3 counts!

But let's look at the future! This week we will have a final match of the KO title's tournament and it's going to open a new chapter in the Knockouts division history. The post-Gail Kim era will begin, with the broadcast of the title match and presenting of the new Champion.

Maybe, for many fans the names of Rosemary and Laurel Van Ness don't mean anything, but if you are regular follower you will know who exactly are those two amazing women. Better known as Courtney Rush (Rosemary) and Chelsea Green (Laurel Van Ness), these two women are already respected and demanded talents on the independent scene. Of course working for Impact Wrestling/GFW helped them to discover a new dimensions of their wrestling personas. Especially Rush's Demon Assassin gimmick, kind of re-established her as performer and make her really colorful and interesting.

The match must be great! Actually, I think that there are small amount of people who don't know how it will end, but as we always said "We know the end, but we want to see how they went to it!". So this Thursday night, we will have our new deserving KO and the beginning of (we hope) new bright era, stage of KO's action, full of new signed talents and  more catching storylines!
By S.K. at December 12, 2017