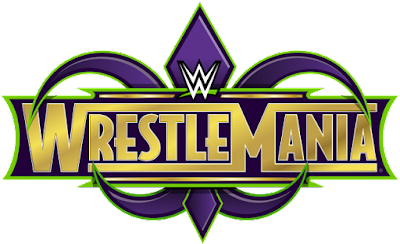 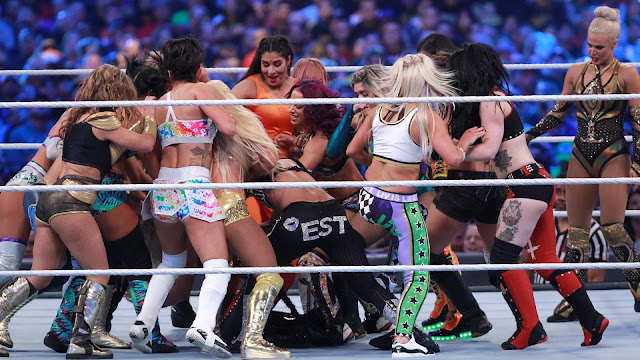 Wrestlemania 34 had it's 4 matches that involved women! Two championships, one in the Kickoff and one mixed tag team match, debut!

I saw several key points in it and days after the show, I can calmly present to you my analysis.

TAKING OUT THE ANNOYING ONES 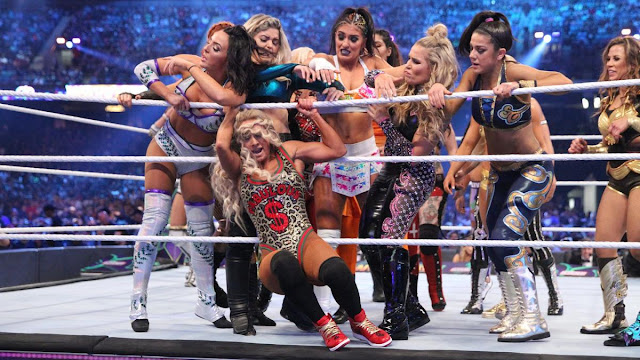 The match started with the elimination of Miss Money In the Bank Carmella (c'mon, that is history, too and The Princess of Staten Island is famous about doing controversial history). Carmella is playing with SmackDown's patience for a long-long time and it looks like, not only the ladies of the Blue brand, was agree that she needs to leave first!

This is the key moment, for me, because who were next three eliminated? Have you noticed? Yes, Dana Brooke and the Absolution. All of them really annoying factors. Even Dana!

I can't get Brooks role, yet! Titus World Wide Statistician. Something like singles competitor. I don't know. I think that everyone from the creatives is stuck with her character (even me) so they push her in every multiple contestants match or in Mixed Match Challenge. I was not surprise that she was the second one to go!

With Paige on the commentary (with Beth Phoenix) and her cheering for her girls and sharing how much she prefer Sonya Deville instead of Mandy Rose, we were sure that Absolution will not last long and they were in the first 4 eliminated. They followed Dana Brooke. And do you know what: I am happy, because for me The Riott Squad is the best former NXT, stable! Without Paige as competitor, Deville and Rose are just a tag team, who have some success with bullying people, at some point. I think that they will not last long. 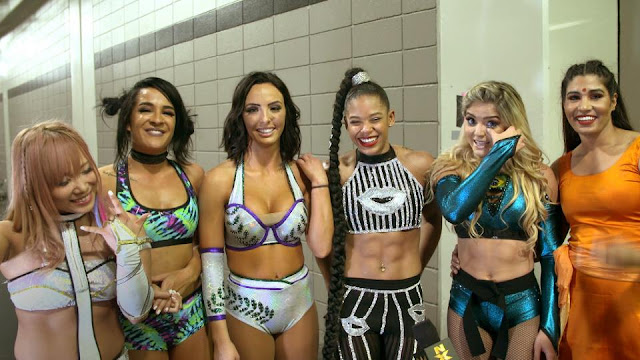 Maybe most of you noticed that NXT's competitors were not the usual top names, like Nikki Cross, Billie Kay and Aliyah, who are kind of a names and veterans in the black and Yellow brand were nowhere to be seen!

Guys! I hope that you got the idea. NXT presented it's international names! They wanted to put their worldwide talents in the front: Peyton Royce (Australia), Taynara Conti (Brasil), Kairi Sane (Japan), Kavita Devi (India), Dakota Kai (New Zealand) and Bianca Belair representing the USA. Nice idea and the moment when they cleaned the ring and started to scream 'We are NXT!' it was all nice...

RIOTT SQUAD HAVE MADE A STATEMENT 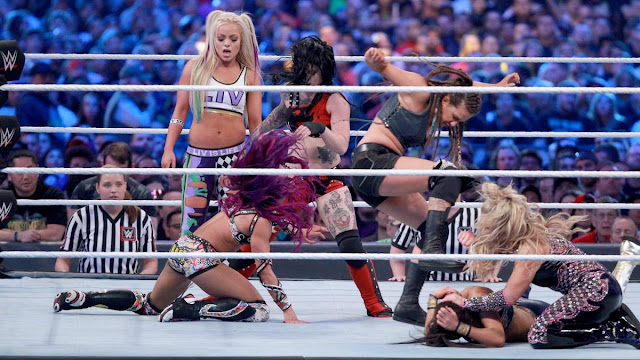 Who left at the end of the match?

We had The Riott Squad, Sasha Banks, Bayley and Naomi. Actually we almost forget about Naomi. Bayley did it for sure!

I am so happy with the Riott Squad booking and that my girl Sarah Logan was the last eliminated from the group.

I really enjoy the Squad's appearance since day one. While Logan is famous with her Mae Young Classic match against Mia Yim, which was great, we know who are Liv Morgan and Ruby Riot(t).

Liv was one of the most developing and hungry for new experiences young Superstars in NXT and I admire her desire and devotion for wrestling.

Ruby Riott is one of the most quickly rising NXT women ever. She is colorful and ultra talented and I was not surprised to see her in SDL. Maybe I was little disappointed that she didn't win NXT Women's belt, but who knows, the future is in front of her.

At this point, I think that the Riott Squad are more stable, balanced and attractive as competitors team, more interesting than Deville and Rose, who are kind of imbalanced.

IT'S ALL ABOUT BAYLEY VS. SASHA BANKS 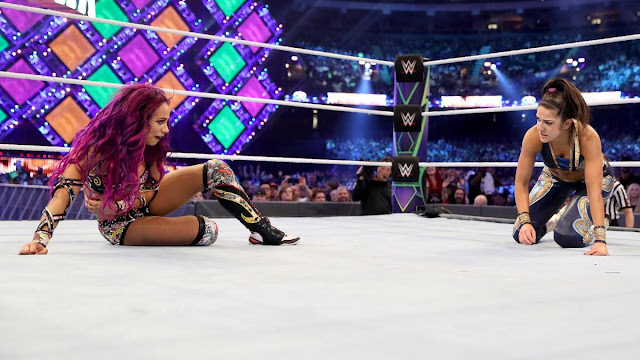 If you think that the whole thing was about Naomi, you are in a serious mistake. Naomi's accidental victory is not the greatest thing in this match.

Bayley and Sasha's rivalry was!

Since the Royal Rumble and Elimination Chamber, the issues between Bayley and The Boss are evolving and rising, getting more and more heat. WM 34 was the great stage to give Bayley a sort of revenge. So WM 34 Battle royal set the stage for more altercations between the two best friends.

The first ever WM women's battle royal started with controversy and it was a nothing more special than a usual Battle royal (I am kind of fan of this type of matches, they are funny). The idea to have all three divisions was really nice, the International team of NXT was nice, but the end was the usual, possible end. Someone capitalized on the other's mistake.

For me this is not some sort of a great win!