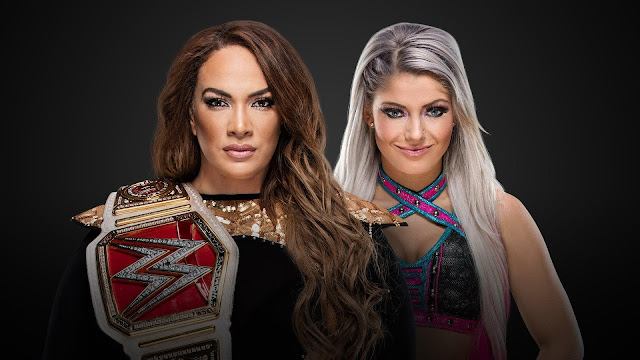 It's hard when you have another couple of Superstars, facing each other, aside from your total admiration about them...


In the case of Nia and Alexa, my admiration are equal!

How is that possible?

Alexa Bliss was great Raw and SmackDown Women's champion, despite the fact that she 'skipped' the NXT Women's title reign. She is stunning on the mic (rare ability), she has a really competitive moves-set. But... I was tired, I think WWE Creatives were tired, too... That 'Goddess' thing and constant insults, they are getting boring at some point. I think that she is great, without the belt as she was great with it. I don't feel any sorrow about her lost. She will re-gain that title in the future, for sure!

But, please not now!

Nia Jax, walked a long way, as a loner. She was that smashing, ruthless, force of greatness, that left the pile of broken Superstars, whenever she competed. Nia is kind of balanced right now. Maybe sometimes, she is a little boring, limited by her size, but you can't deny that woman's devotion and passion... her, heart is in the wrestling, not because she is The Rock's relative. I almost forget that fact, most of the time. She made a name on her own and I am sure that we will see more surprises like that stunning front-flip senton, she does from time to time.

The storyline between those two, was one of the good to be followed. Actually, many of us, had known since the beginning, that this alliance, will end bad! That Alexa is using Nia and the time would come, for Jax to realize it and break free... as she did. I'm really kind of divided on Nia's face turn. It's kind of 'funny in a strange way'. But I am curious, where the creatives will lead that story and that turn.

We gave Nia Jax 52% chance to win and the rest 48s are for Alexa, because she still has it. This Sunday it will be a good rematch, between those two and I can't wait until Monday to see what was happening!