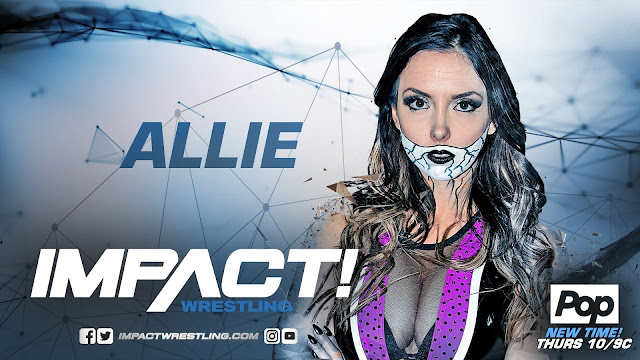 For time to time Impact Wrestling really nails the storyline for their Knockouts! Well, this was something like cheap filmed horror movie, with poor decor and one casket, but the story was kind of innovative and it's evolving...

For those who don't follow, Allie and Kiera Hogan went down to the Hell/or other Evil dimension/ from where Su Yung is constantly crawling to terrorized the rest of the KO division and where (kayfabe) she dragged Rosemary (who is inactive due to injury, back at the time). Well, the mission was unsuccessful as the one who might be saved became a savior, for the rescue team and Allie and Hogan retreat the Underworld in a hurry.

For weeks we have seen that Allie is turning Dark! The explanation is that she gave her soul to Yung and co. and now one of the worst nightmares of Kiera Hogan, soon and for the rest of the KO, happened. One of the purest and beloved babyfaces, who is also a great wrestler is now ally to one of the Darkest character that ever stepped in Impact ring and also a great wrestler...

Hogan already had a taste of the Darkness in her former-friend! Who is next? (eventually Tessa Blanchard or Taya Valkyrie - whoever wins the KO title's match, with Gail Kim as special guest referee).

I love it! I think most of the wrestling followers and Impact viewers, who love every aspect of the business, loves it as well!

Finally, Alli can release more of her potential as a competitor and as a gimmick. That heel turn is really welcomed and it allows us and her to see more forbidden actions, more terror by Allie. This was a really brave and paying back storyline. Throwing one of the most positive and lovely character into hell and replace it with demonic soulless and ruthless version was a reaaaally good move and i just can't wait to see where this all goes.