THE REST OF NXT!

But what about the others.
Let us see who is what in NXT as heel or face:

One heel advantage over the faces.

Now is the time for several women to shine - like LeRae, Belair, Aliyah and Borne. Purrazzo and Yim are coming with their legacy and names. They need more pushes and storylines. Especially Deonna Purrazzo, who was sidelined.

But Candice LeRae really needs a good rivalry. Her talent is kind of wasted. I think that she could work separately storyline with Vanessa Borne, who also need some push in that roster as a serious worker.

Bianca Belair is in the title picture now (spoilers) and there is a minimal chance to see her turn to face. But, her heel person is working well - it's kind of natural. It's not so evil, but it's a definitely not a hero gimmick. She's perfect the way she is, as the EST of NXT!

Taynara Conti is like enigma. She is the first Brazilian woman to step in WWE ring and she had really nice matches against Nikki Cross and Vanessa Borne in NXT and against Lacey Evans at  the inaugural MYC. I think for her will be great to be involve with other international names, like Kavita Devi and Xia Li. But for now it's not clear if she is a face, or heel. Her attitude is kind of heel-ish, though.

Aliyah - that girl is a real veteran in NXT! She was missed in a previous calls and for now is stuck in the development, for good. She really has more to accomplish in NXT and eventual call will doom her as a single wrestler in the main roster. She will be assimilated in RAW or SDL. Especially with her undeveloped character : Who is Aliyah? Arabic dancing princess?! Ariana Grande's cat ears impersonator?! Exotic bad chick?! Who is she? I totally lost it! She needs stability, because she is a good wrestler and she can show us more in the ring.

Back on the Main eventers: 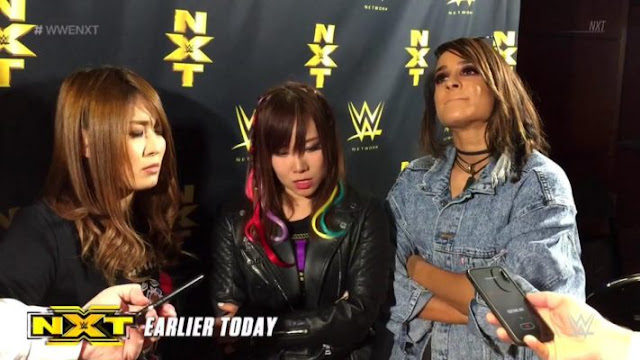 Kairi Sane still has it! She still has unfinished business in NXT and we hope to see her in more main battles in the ring, teaming with Io Shirai. Shirai on her own is someone with a lot of potential and totally walks in the steps of Asuka. We are adding the Captain of Team Kicks Dakota Kai to these two as ally from time to time and we have a great pack of babyfaces who can easily main eventing every NXT episode! 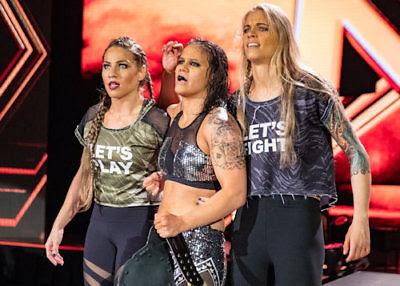 But the top faces couldn't exist without top heels! And the MMA's three Horsewomen are really serious competition. Baszler as Champion is dominat enough, but with Marina Shafir and Jessamyn Duke on her side Shayna is kind of invincible. It's interesting how the UFC women get into the center of attention and stole the spotlight. Now they are threatening to start a Dark Era of dominance and terror in NXT and the teams that dare to fight them will be put on the edge.

NXT looks full of possibilities and future great battles more than ever.

BONUS:
OUR BUNCH OF SUPERSTARS WE WANT TO SEE DEBUTING IN NXT:

These three Performance Center's trainees spend a lot of time competing in Live Events, they are already experienced enough to join the NXT TV Roster, as well! All three of them were in the WWE PC, long before Duke and Shafir and it will be logical to see them battling for their spot in NXT.

Jessie Elaban has a nice gimmick. She could be a nice addition to Baszler's opposing clique - Kai, Shirai and Sane. I think that there is a place for her in there.

Reina Gonzalez is kind of enigma for me! Second generation Superstar, powerhouse with potential to shake the NXT division, ... but her gimmick... That bell she brought in her entrance... Hm, she's a cowgirl of the Widl West or Rio Grande or wherever, isn't she? ... Oh, now I get it! ... Well, I want to see her because ... she reminds me of Victoria/Tara/Lisa Varone as well and one big and strong girl like her is never 'too much'. I can see her as someone's enforcer at the beginning (for example as Aliyah's or Vanessa Borne's bodyguard and tag partner).

Xia Li and Kavita Devi (in my booking plans) might join Taynara Conti (as I mentioned upward). They could be something like soft-version of the Anti-Americans! More soft, more feminine but ruthless enough. As international team they could bring a lot of exotic and base don their different styles it sounds really promising to see them wrestle together. All of these stars are historically, the first women ever from their respective nations to compete in WWE and that fact need to be capitalized on by the WWE/NXT Creatives!
By S.K. at December 20, 2018