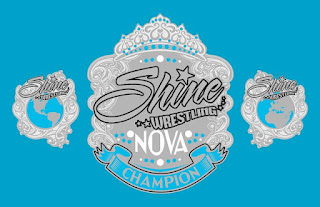 July 14 and 16 will be a very hot days for SHINE Wrestling's fans. And for WWE fans. But this article is for the amazing women of SHINE!

SHINE made a more pleasant presentation of its tournament's 16-participants - in a groups of 4 stylish posters. Meanwhile I hope that we'll see WWE doing the same profiles for the women, as they did for UK and CWC's contestants, because these random pictures are nothing nice.

The first group is stunning. I will lie to you if I tell you that I know who Dynamite DiDi or Holidead are.

I can't find DiDi even in Pro Wrestling Wikia. I search for her in IWD and I found that she is one of the freshest names in the tournament. Four matches for SHINE and FIP.

Holidead is better known. If you can say that someone is known with three matches for three different promotions. I was impressed from the fact that she has a tag team partnership with Thunder Rosa (aka Kobra Moon). Actually this tournament, might be Holidead's SHINE debut! I hope we'll see more from her for the our favorite all-women promotion. I like her face paint and character!

Priscilla Kelly! Started her career in 2016, she quickly start to receive more and more attention from the indie promotions. She is part of AWE, WSU, SHINE and FIP. Her Gothic look is not something new, but it's something different for SHINE. I'm looking forward for this one.

There is nothing  more to  say about Ivelisse - she is our favorite participant. Already two-times SHINE Champion, SHINE Tag Team Champion and eventually SHINE Nova Champion.

From this group we want to see Priscilla Kelly facing Ivelisse in the next round and Ivelisse continuing to the finals.

No records for Aja Perera and Robyn Reid in IWD. We learned that Perera is Brazilian pro-wrestler. It's obvious that this might be their first SHINE appearance. Totally fresh!

ACR or Amanda Carolina Rodriguez is a well known face for the WSU and SHINE's fans, and only to them. She worked with Ivelisse and Thea Trinidad and now is her time to shine bright on her own.

Candy Cartwright is someone who already started to do a name for herself, defeating SHINE Original Leva Bates on her way to the stardom. We are willing to follow this one closer, too.

Our favorites from this group are ACR and Candy Cartwright , with Cartwright on the finals.

La Rosa Negra was in the SHINE Inactive roster. This is the roster of the women with unclean status (this is how we see it). Debuted in 2012, the Puerto Rican wrestler already has the skills and experience to compete in this tournament. So glad to see her back!

For Shotzi Blackheart is known that she is currently signed with SHIMMER and several other small companies. This might be her big debut for SHINE and we hope to see this Green-haired wrestler working for our favorite promotion in the future. (X-Men Comics Joke: They have Psylocke (Gabi Castrovinci/ Raquel), now they can get Polaris (Shotzi) and they can add Leva Bates as all the other X-Women :D ).

Another SHINE debut will be Jordynne Grace's participation in the NOVA Championship Tournament.  Grace is known for her work with CZW, WSU, Beyond Wrestling and more. She is a good addition to the brightest roster of SHINE!

Last but not least: Aria Blake! Blake's name is one of the familiar and she is cited as a very prospective and talented young lady (born in 1994). The list of the promotion with which she had worked, is long. She is not a stranger to SHINE too. That make us curious about her career development.

Our favorites here - Aria Blake and Jordynne Grace (we want to add and La Rosa Negra, but there will be battle for two in the next round) with Blake on the finals.
The last group, presented at June 30 is really, really the top of the tops and the cherry of the top of the pie.

Do you need to remind you who is Veda Scott ? She is iconic! She worked for ROH, SHIMMER, SHINE and currently is included in WSU and several other rosters. To see her back in SHINE is one of the greatest things that happened this year. We hope to see her working again with SHINE in the future!

Leah Vaughan a.k.a. Leah Von Dutch, is a well known name for the SHIMMER and SHINE fans. She is kind of familiar for WWE NXT's fans, because she appeared in a match against Ember Moon, in the past. Now she is targeting her first SHINE title and her chances are not to be underestimated.

Stormie Lee is like a SHINE exclusive talent (according to IWD). Debuted at SHINE #34, in 2016 this young and charismatic lady is looking forward to earn a victory, for the promotion and maybe she will do it with a bang appearing in this tournament.

Last but not least - WSU Spirit Champion Kiera Hogan has already impressed the world of women's wrestling. She is one of the favorites. She already has two singles victories in SHINE and the highest chances to win all this tournament's matches. We didn't see all of her yet!

Our favorites from this group are Kiera Hogan and Stormie Lee, with Hogan on the finals.

At the end the SHINE NOVA Championship Tournament was described as a tournament, introducing a title for the newest, freshest and not established talents, so eventually we will not see Ivelisse, Veda Scott, Leah Vaughan, La Rosa Negra or ACR as a winners. For me the role of the newest SHINE Wrestling belt is to elevate the fresh talents. So it might be win and put in the line between SHINE additions who are with the company, for almost a year. But we will learn more, when the belt is introduced in July and the months following the tournament.

One follower in Facbook, wrote that this women are the women who will not appear in WWE Mae Young Classic! I think that this tournament plus is that we will learn who the winner is, before September 2017, and we will have the chance to watch it soon after the taping. This event has it's own charm and is bright enough, curious and interesting for every women's wrestling fan. So we'll try to follow it!