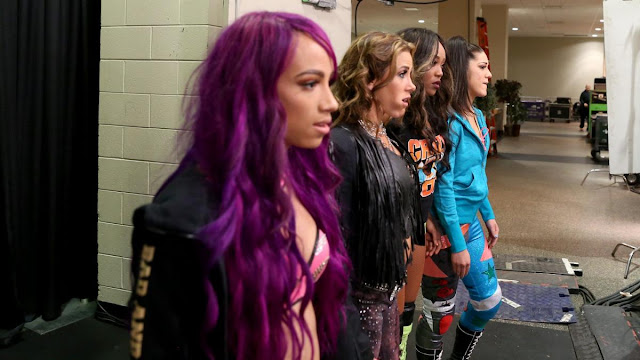 Survivor Series PPV is upon us and the things get ugly!

This Monday RAW presented two women's battles - one rematch and one triple threat for the Team RAW's Captain spot. SDL answered with mass assault at Monday and a huge fatal-4way match to determine the Captain of team Blue. Meanwhile 'down there' in NXT, my favorite Superstars and one 'screwed up' Scottish Daredevil, fought for tha last spot in a historical Fatal-4-Way title match!

EMMA VS. ASUKA, THE TLC REMATCH
...TRYING TO STEAL ONE 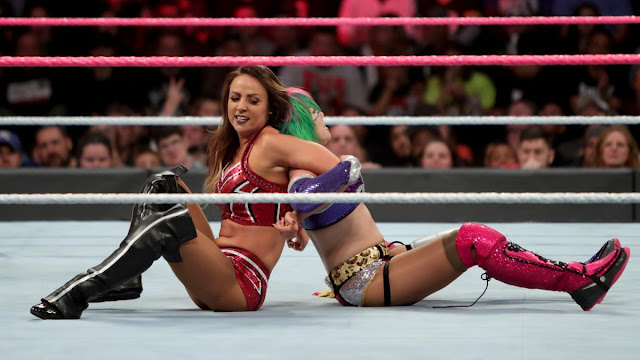 It was a really good idea to live this match's emotions one once again!

I love Emma and Asuka's work! I love the way WWE bookers and trainers put Emma as strong character, not just a poor victim of The Empress' fury! Emma put a really good fight and finally got an opponent who can get the best out of her! 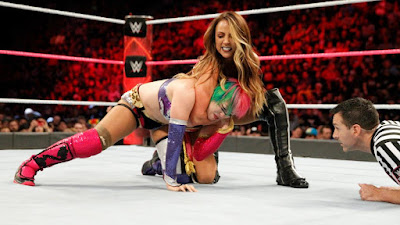 I love to see this feud evolving. I even want to see Emma stealing one, from Asuka.

On the other hand Asuka's RAW debut as her TLC's, was anticipating and it worth it to see her in rematch. For the Empress it was a good starting of her Main roster career, by facing someone familiar. I hope to see her working with other former NXT fellows, like Bayley and Nia Jax, like working with new faces that she hadn't met before -Paige, Sasha Banks, Alexa Bliss. But for now Emma is enough suitable for an enemy. 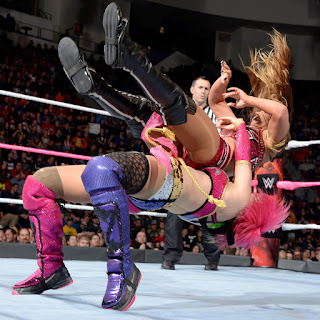 Both women have their amazing styles and they are extremely technical, with Emma a little bit held back, sometimes from her full potential that we have seen. Asuka's Japanese shoot style with these kicks and holds is just the biggest thearat for every woman in WWE. 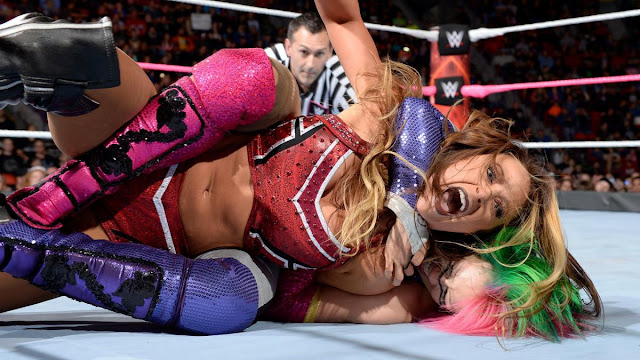 The Empress in on her way to conquer another peak of her amazing journey and to make legacy, plus paving the way for other Japanese women, like Kairi Sane.

SASHA BANKS VS. ALICIA FOX VS. BAYLEY, FOR THE TEAM RED CAPTAIN'S POSITION
...'MAD FOXING' YOUR WAY TO THE VICTORY 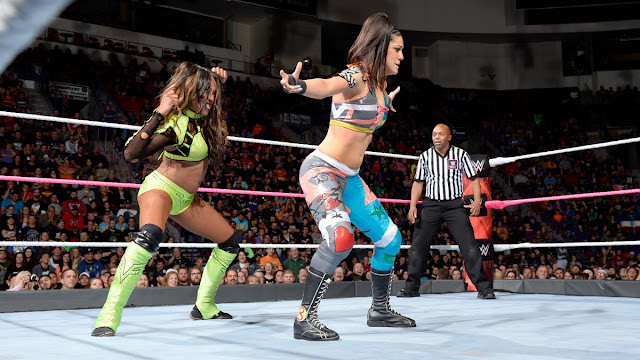 She's crazy and she's back!

Alicia Fox's crazy character was totally released to freely destroy and screaming and taunting all over the ring!

Actually I didn't expect to see that but it was a pleasant surprise, because it brings some difference in RAW. It's always like Bayley-Sasha-Alexa-Nia, from time to time we have Emma! Now we have Mickie James feuding with Bliss, Emma with Asuka, and Alicia Fox finally winning an important match. 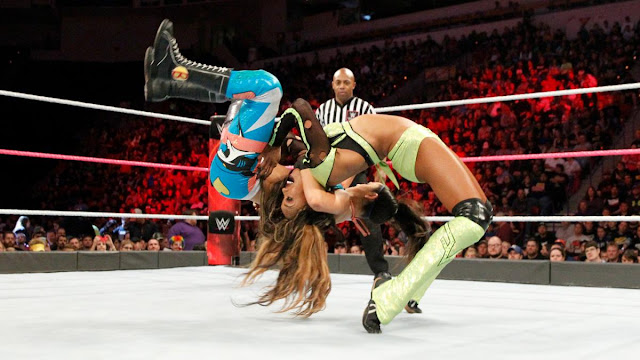 I respect Fox as worker. She is really athletic, her crazy attitude is really enjoying! She is a real veteran and I think that the respect they paid her this week is really great - to beat two of the top names of the division and to earn the honor to lead RAW women's division against SmackDown! Live! It's really well deserved, after long time of underrating! Congratulations! 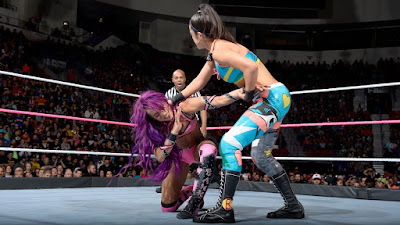 Bayley and Sasha did their job really well and were there where they were needed. Secretly I am happy that they are not the winner of the match, because sometimes, they are overexposed. But as always it is pure entertainment to watch those two in the ring! Asuka is waiting for you girls! Are you ready? 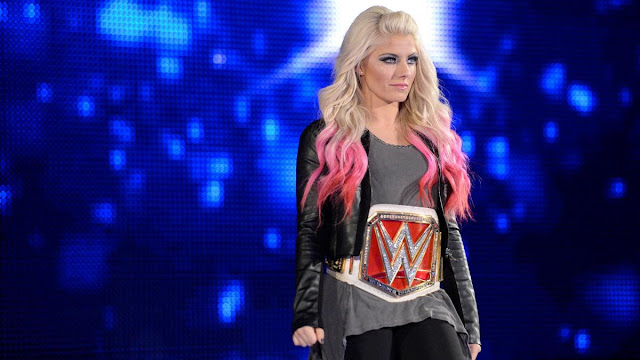 It's obviously not over! TLC may be in the past, but this women's rivalry is far from over!

This Monday Alexa Bliss, tried to celebrate her victory, by forcing the fans to chant 'You deserve it'. A cause that was lost, before it started. And actually at the end Mickie James granted the Goddess wish in very unwanted by Bliss manner - by hitting her Mickie-DT and telling Alexa 'Yes, Alexa, you really deserve it!' 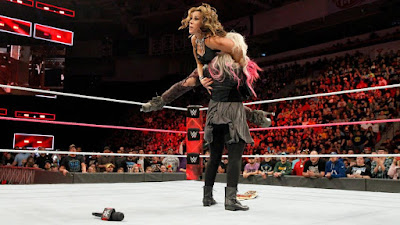 UNDER SIEGE AND THE LAST STAND 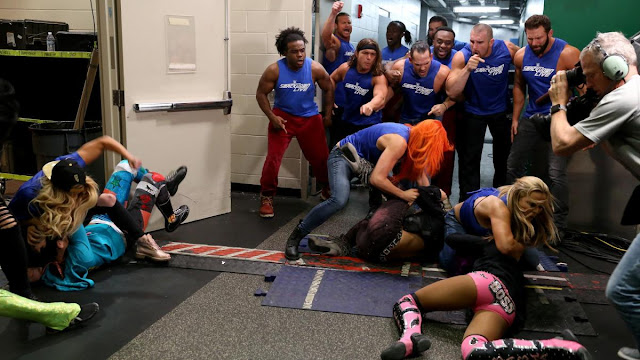 This Monday's Night RAW episode ended with a really brutal segment, that left me with a mix feelings!

Yes, Survivor Series are coming, with both brands facing each others. But that backstage assault was really,really controversial. 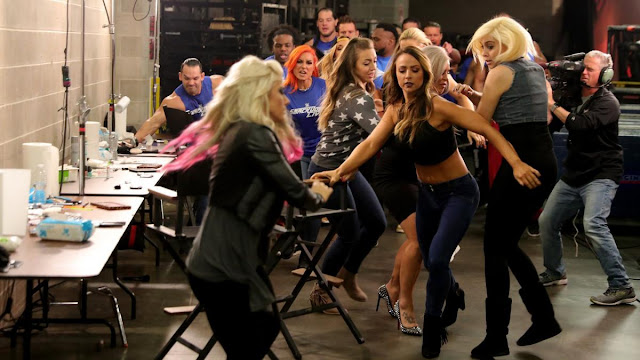 I think that Emma, Dana Brooke and Alexa Bliss were the most smartest as they run away in the front of the coming Blue brand mob. These three were the smartest!

Well, Mickie James, Bayley, Sasha Banks and the RAW women's team captain was the bravest and they took the last stand! It was really heroic and dramatic moment. Th beat down of the RAW women's earn my total sympathies for the victims. 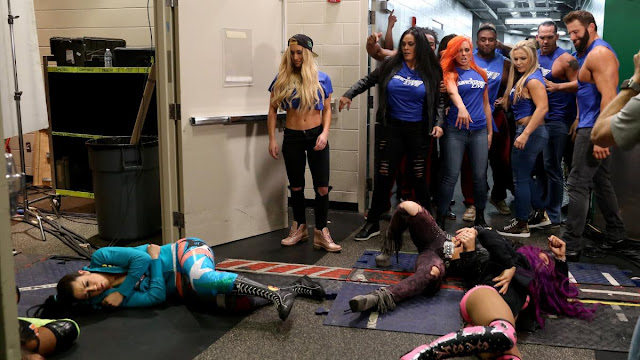 For me 'RAW under siege' angle gave RAW a moral elevation in the forthcoming battles at the PPV. 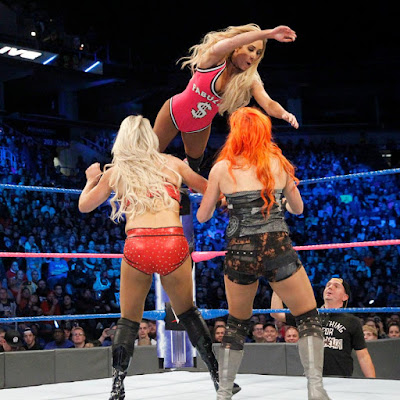 SmackDown Live put another match that displays the technical advantage and superior of their division!

Aftre RAW's Captain became known this Monday, it was time SDL's ladies to fight to determine their own leader.

The match was really nice and intensive, starting with backstage segment and Lana learning that she will not compete at the forthcoming PPV (that's unfair, where are the opportunities when you need them?!). Then we had some Champion showdown! And the match begins...

As always we had a bodies flying everywhere, a lot of twists and turns. Even Lana got involved for a moment and at the end Becky Lynch overcome the odds, and the SmackDown Inaugural Women's Champion won the match and become the Captain of her team.

The match was really good for its 11-12 minutes and as always SDL women prove that they know their craft well. This match raised the attention on the future question - who exactly will enter the teams of 5 women! As we know that the champs of both brands will met each other in a match, the same night, most of the brands are  having more than 5 women in their rosters. So the battle for creation of a teams begins!

NIKKI CROSS VS. BILLIE KAY VS. ALIYAH VS. VANESSA BORNE VS. LACEY EVANS VS. BIANCA BELAIR VS. SARAH LOGAN VS. CANDICE LeRAE VS. MERCEDES MARTINEZ VS. TAYNARA CONTI VS. SANTANA GARRETT VS. DAKOTA KAI VS. RHEA RIPLEY VS. SAGE BECKETT VS. ZEDA,
BATTLE ROYAL TO DETERMINE WHO WILL COMPETE IN THE FATAL-4-WAY FOR THE NXT WOMEN'S CHAMPIONSHIP
... GRABBING THE SECOND CHANCE WITH A MAD FURY 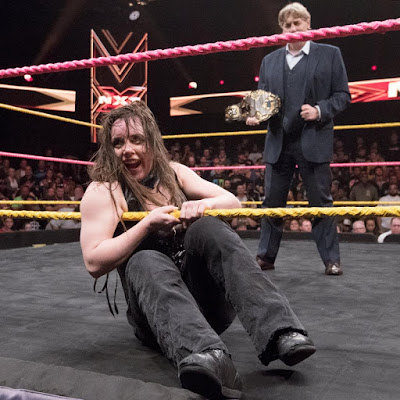 Congratulations! We have our last competitor in the forth coming epic fatal-4-way title match! 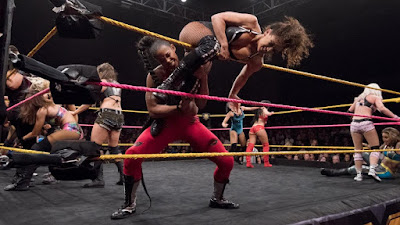 NXT's GM William Regal started the episode announcing that Nikki Cross will receive second chance. We were reminded ho Taynara Conti, leaded by the Undisputed ERA, attacked and distracted Cross in her qualifying match, when she had the victory in her hand. 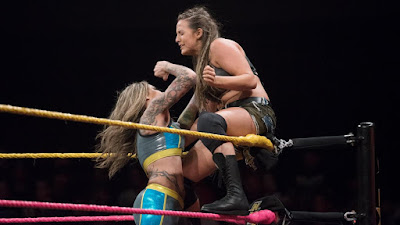 This week every WWE PC and some Mae Young Classic names, entered the ring for a really interesting battle royal. I was pleased to see Candice LeRae, Santana Garrett and Mercedes Martinez, but at the same time I asked: where are Mia Yim and Piper Niven? I was kind of consoled when I saw my favorites Vanessa Borne, Sarah Logan, Bianca Bleair, Lacey Evans and Dakota Kai.

It was really nice to see WWE using this rare rule of the top rope elimination, the one where if you are dragged under the third rope, as Conti did with Cross, or fell through the second rope you are not eliminated. 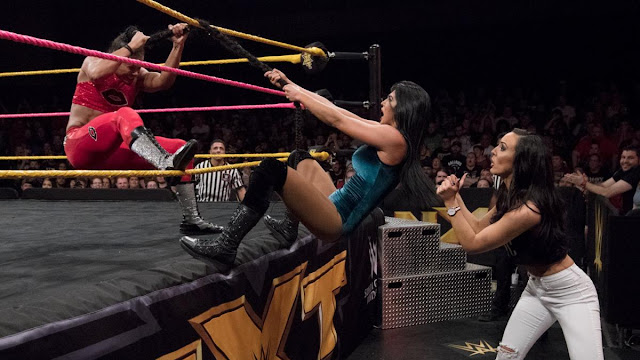 I enjoyed the way that Bianca Belair took her revenge on Billie Kay, for Kay using her braid as a rope to climb back at the ring. Belair whipped the hell out of Billie.

At the end I enjoyed that Nikki Cross won it! She is a total wild card and a force in the NXT women's division and you could saw the fear in the faces of all of the female competitors. She is someone who play vital role in the NXT Tag Team division too. Sooo, what a great recognition than to win the final spot in a match, that will be written in the history books! 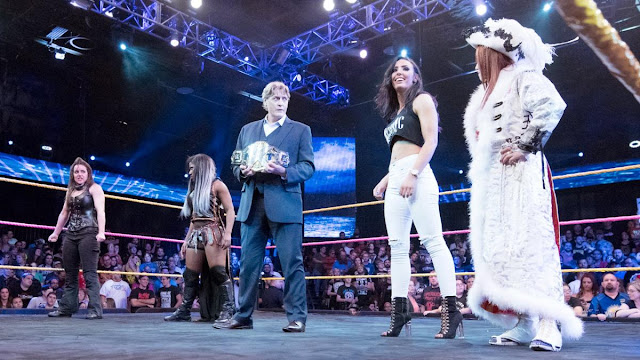