NXT TAKEOVER: BROOKLY III PREDICTIONS: IS THE MOON READY TO ECLIPSE THE SUN OF NXT?, EPISODE 2 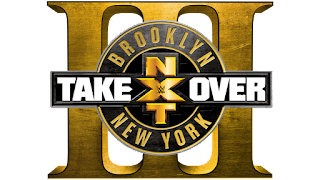 The NXT Legend about The Moon and The Sun, is taken to its next chapter! The battle of this two enigmatic female warriors from the East and The West, continues more intensive and heated than ever. We will analyze their characters, fan reaction and skills, before we proceed to point our prediction for a winner - the one we want to win, and the one we thin will win it! 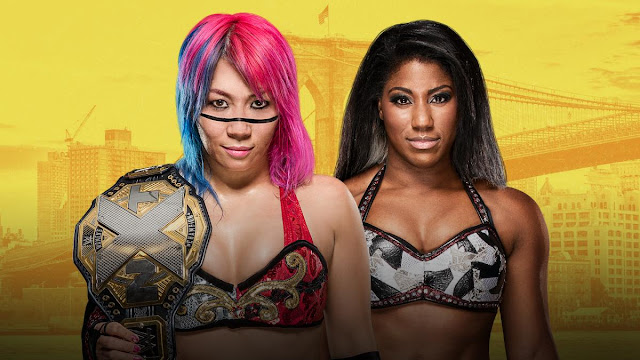 A RUTHLESS CHAMPION: ASUKA- THE REIGN OF TERROR (?!?)

Yesterday in our weekly overview, I wrote, that Asuka elevate the bars in NXT (and not only). An hour later I was stroke by revelation! Asuka really raised the bar, made the women's wrestling more competitive, attractive and really technical. She pulled her opponents - from Bayley and Nia Jax, to Nikki Cross and Ember Moon, to their limits! She broke records, even men's accomplishments were surpassed by the vicious Empress of Tomorrow! But at the same time her 'reign of terror', put the women's division in a sort of vacuum. It's kind of stuck and it's not because Asuka is invulnerable, no! There were women like Nikki Cross, Ruby Riot and Moon, who really make her life hard! Asuka is the one who can capitalize on the others mistakes and has no holds, when it comes to retain her belt!

Now when she was hit with Eclipse, in August 02, episode of NXT, her ego is kind of wounded... but there is nothing worst that a wounded animal, looking for a final deadly hit!

ASUKA'S CHARACTER:
Fro honorable female warrior to hysteric egocentric title holder! Asuka is a reasonable heel! She has more reasons to be bad and self-confident than many heels in WWE's history(except for former-heel Charlotte Flair). Asuka's motive to be evil and mean with all of the other girls is that she is the best and she is ready for everything!

Her character transformation didn't affect her image at all. Even as the NXT top heel, she is well respected and well established as a Champion. But her overconfidence is her weakest spot and it's a matter of time someone to capitalize on this, because her ego is growing after every win.

At the same time, The Empress of Tomorrow is not that kind of usual heel. She still has her Japanese culture heritage and even as a attacking from an ambush Tasmanian devil, she still is sort of a fan favorite... Because when it comes down to a match, she tries to overcome the odds mostly using her wrestling skills(mostly).

As Champion - well, we didn't see her often on TV. I don't know, maybe because she is divided between USA and Japan. Maybe because they keep her fresh for TV, while exploit her often at Live events. I think that the WWE NXT creatives, keep her away from TV, just to keep us more and more interested in her persona and Championship reign, and because she is can steal the show from the other NXT women, who are not less talented and deserve some TV time, too. But sometimes, she just return for a non-match segments, when we desire to see her compete, even for a minute. Her reign is king of shadow reign, mostly defended on TakeOvers!

'Asuka gonna kill, ya!'. NXT Universe loves Asuka. The Empress is warm welcomed in her every appearance. We love her colorful style, her funny English and her hysterical Japanese explosive speeches.

Asuka is fan favorite and she is not the only heel, who the fans loves.  Win or lose, she will be the woman, who next to the Four Horsewomen of NXT, Emma and Paige, changed that brand forever, and raise the bar, to almost unreachable heights!

There is no need to describe Asuka's skills. Especially her wrestling skills. Her vicious but well controlled kicks, her funny hips attacks, her dangerous lock! We saw all of this and it continues to amaze us every single time, when she step in the ring. Maybe because we see her rarely, these days!

She is the best in NXT and even WWE!

I want to notice her mic skills! For a person who struggles to pronounce a sentence in English, she is kind of attractive, when she grab the mic to yell that "NOBODY...IS READY... FOR... Asuka". Asuka is someone who can work her segments, without using any words, just with face and body expression. Remember when she defeated Dana Brooke and Emma in a different occasions. Her post match angles with both, were funny, simply with Asuka's mocking, like "Ooooh, Danaaa!" and tapping her head or making the Emma's dance, to annoy the beaten opponent. Even her exchange of psychotic smiles with Nikki Cross ove the title belt, left backstage, was perfect and doesn't need any lines! So Asuka shows the unique skill of using her entire appearance and body language instead of dramatic lines.

THE ECLIPSING CHALLENGER: EMBER MOON - THE PATH OF THE FIRE

The Moon can eclipse the Sun! That is scientifically and well witnessed event! But NXT is a different dimension, and often the physical laws are not working in there! Especially for the high-flying Ember Moon. Man, you can feel the desire of this stunning woman about wrestling and title reign in NXT. She has been waiting for so long! Her path to WWE, was so full of twists and rejections. So now when she is one step so close to her first reign, you can feel the tension in the air!

She is mostly a War Goddes, the Follower of the Fire Path and the Red/Amber moon! She was enigmatic and mysterious. She was well promoted, before her arrival. She stunned us in her first match against Billie Kay( that is a kind of instant classic). Since day one, this woman, proved that she is a premiere athlete and God damn it - SHE LOVES THIS RING, the competiton, the wrestling! She is so devoted and this her live! Her devotion is one of the most obvious in WWE at all!

For me the red lenses are kind of too, much. I don't think that they make her more Goddess/Female Warrior! I don't like them very much. Her skills are enough to secure her character's fame and attractiveness.  She is mostly a fighter not a speaker and this divides the fans!

Fans are amazed from Ember's stunning move set and if she is in the ring to compete, they support her, highly! But they are divided about her segments and speeches. I have read, with sorrow, how one fan shared his opinion, that he don't want to know anything about her character. Diva Dirt on the other hand, always criticize her segments, as not interesting and boring.

But overall the fans love Ember Moon - the fighting War Goddes! I think that for them is not a huge problem if she talks from time to time. They just knows, that when the talk is over,  the real business - the fight begins! They know that she will give them the show, they are paying for!

I love every single move of Ember Moon. From her Eclipse stunner, to her springboard crossbody and handstand headscissors! I am sure that this athletic woman, has a lot more to show us (I hope to see Tiger fient kick from her. That will be sexier than Ray Mysterio's and powerful). I am leaving aside that her Eclipse is really damaging for her spine move, than real danger for her opponent. Her athleticism and acrobatic skills are top of top in NXT!

Her promo and mic skills! Weeell, guys, let's be real: What are you expecting , for the poor woman? Actually I think that she did a nice promos and that's why the creatives, push her to do more and more. She is kind of overemotional, but come on - this is the girl's life. She loves this ring, the emotion to perform at higher level. She talks really nice and if you think that is hard to understand her character, via her interviews ('And yes! I'm working here...'-I love this war of words, between Asuka and Ember, around NXT TakeOver:Orlando), you don't have to. They do this to show that she is not a bruiser who can't speak! Maybe the fans and critics expect some divine talk or something like a presidential speech. I think that she is good enough and her emotional expressions are good characteristic and make her real and not harm her powerful image! I like her character and don't mind at all to hear more from her! 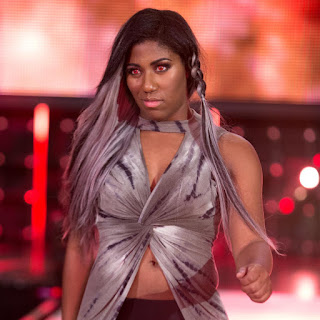 WHO WE WANT TO WIN AND WHY?: EMBER MOON

I know that you are not surprised, especially after our warm and heartfelt defense we put about her promo skills! As many of you we love her fighting skills and her athleticism. We think that she could be good fighting champion and heir of Asuka's legacy. I think that she spent enough time, waiting for this belt, training and fighting, to prove that Ember Moon is someone who NXT authorities and fans can rely for a good spectacular and not just entertaining, but really competitive match.

Ember deserve to be the next Champion! 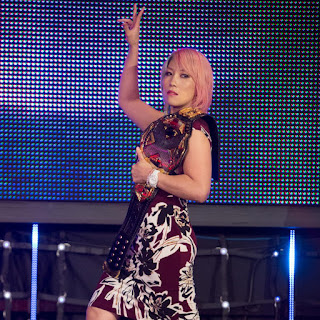 WHO WE THINK WILL WIN: ASUKA

I think that Asuka will fight ruthless than ever and she will defeat Moon with a dirty trick! You know, the third attempt is the lucky one for success , defeat and title reign for Ember. The idea is that The Empress is logically scared by the #1 Cintender, especially after the Eclipse she received from the War Goddess, one week ago! That's why she will use dirty tactics to secure her reign, her record 500 days reign and to bring unbearable heat to their intensive war! That win will make the fans wanting to see Moon as winner next time.

Despite our desire, we are choosing Asuka and we predict a third and final match between both, with Moon victorious!
By S.K. at August 18, 2017