The cast of 'GLOW', Becky Lynch and James Ellsworth, mix it up for this week women's wrestling events for the Blue Brand. With one match and two segments the Land of opportunity looks behind Raw, with their two matches, a segment and post-match attack and two other segments. But no! SDL was great on its own way, having Paige, the Absolution, Naomi, Lana, Becky Lynch and ... James Ellsworth lining up for the show. 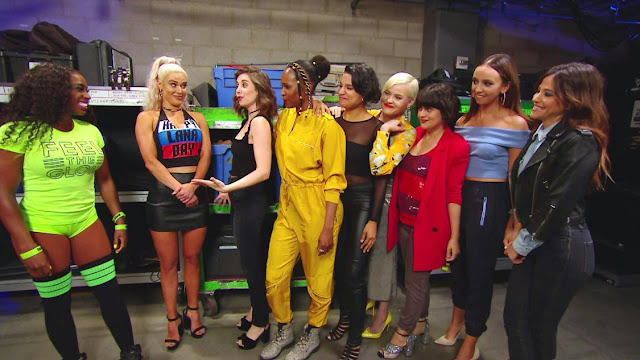 We had plans to write about 'GLOW' - the Netflix Original TV series, inspired by the promotion with the same name, who gave us Lisa Morretti better known as Ivory in WWE! The series are really nice look at women's wrestling and I am recommending them to everyone who wants to open his/her mind and enjoy the humor and drama of the show. And don't forget! The second season is premiering this Friday - June 29, 2018 on Netflix!

So Lana and Naomi were arguing about their infamous Dance Off, that ended in a brawl, when the shiny and colorful cast of 'GLOW' showed up and told the both Superstars, how they inspired them and in the spirit of peacemaking, they suggest Lana and Naomi to team up, instead of fight each other. Idea that should be reconsidered! Imagine the Ravishing GLOW!!!

It's not a bad idea at all, with all that rumors, surrounding eventual re-introducing of the WWE Women's Tag Team title. We have the IIconics, the Absolution, the Riott Squad and the likes of Charlotte Flair and Becky Lynch, Alexa Bliss and Mickie James, who might team up for the gold. NXT can offer Steffani Newell/Tegan Nox and Dakota Kai as a team and combine someone like Venessa Borne with Bianca Belair, Aliyah with Taynara Conti (for international Arabic-Brazil team), Kairi Sane with Xia Li (in a controversial Asian taema of China and Japan - let be peace) there are many ideas. So, the possibility of returning the women's tag team gold are not to be passed with an ease.

Come on! The time is right and it might be great!

BECKY LYNCH VS. SONYA DEVILLE /with Mandy Rose/
They'll never give up, will they? So lock the Dis-arm-her!!! 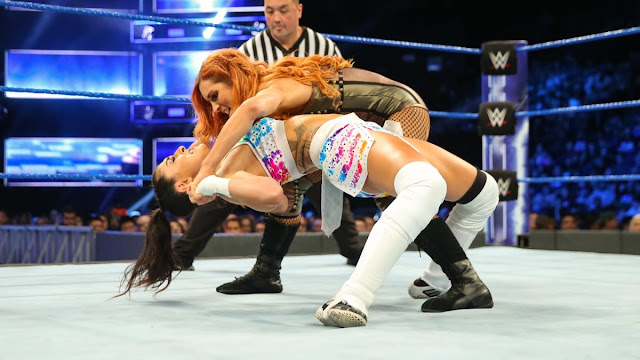 The Absolution refuse to break their team and continue to intimidate the women of SDL! This week they continued their barging with The Irish Lass Kicker and it eventually came to cost them a loss. I love the idea of Mandy Rose and Sonya Deville working together. They are best friends in life and now they are really good annoying heel team as well.  😉 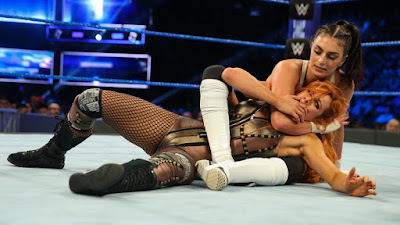 The match was classy and technical - the standard for SmackDown Live! Really dynamic, with drama and of course attempts for interference by Mandy, that ended with her smacked in the face, accidentally by her partner, which cost Deville the match. Becky Lynch finished it with Dis-Arm-Her! 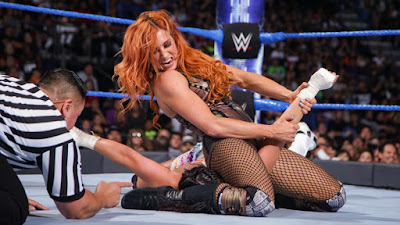 As the Irish Lass Kicker noticed she is on a roll and with her victories this and the last two weeks, she is stepping closer and closer to title opportunity. That is great! The problem is that she and we need to know who Becky might face, because the opportunity to not facing Carmella for the belt is really big! But we are sure, whoever Lynch is facing for the belt, she will give her 100%!

ELLSWORTH IS CALLING FOR ASUKA
Is he ready for a date, next Tuesday? 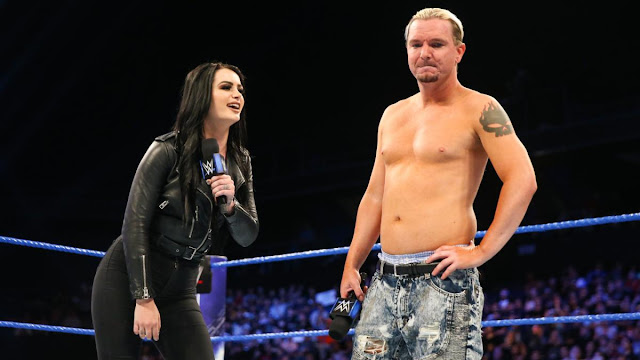 He is back and his sexism is more annoying than ever!

James Ellsworth entered the ring to challenge Asuka, but prior he played his foolish role and talk-the-tlak, full of idiotic statements, like that Asuka attacked him without any reason! Really?! We watched MITB! He cost the Empress her title... And last night he was there, taking of his shirt and 'ready for Asuka'...

Guys, I love seeing Paige around, even as a GM of SDL!

The British Legend entered the ring and reveal why Ellsworth is that brave and dare to challenge Asuka! The Empress was not there, she was in Japan with her family. So, Ellsworth attempt to expose Asuka as a coward, didn't work! instead of that Paige announced that Carmella will defend the SmackDown Women's Championship at Extreme Rules, against no one but Asuka (thanks to Ellsworth).

Then the funny part came!

James Ellsworth overconfidence earn him a date, next Tuesday. And he thought that this date is with Paige (Paige did her best to 'ensure' him), before the GM, broke his illusions about his attractiveness and irresistible charm, by telling him that his date, which is more like one-on-one match is ... WITH ASUKA!