CONGRATULATIOS, NAOMI! YOU DESERVE IT! 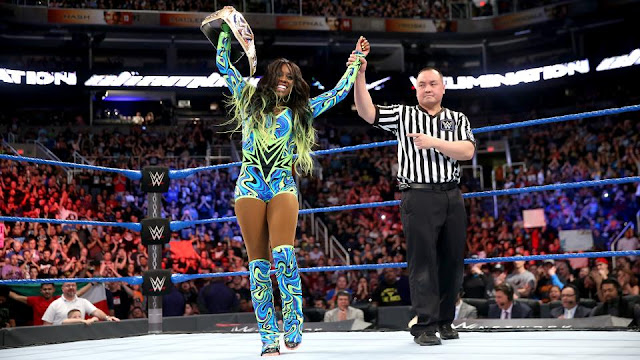 Is there anyone, who didn't want to see Naomi as a Champion?

Well, there are haters everywhere and for everything... but I am asking the real fans and those who loves to analyze, beyond the characters and storylines, those who enjoyed the full picture!

You wanted to see her Champion back there, when AJ Lee was a WWE Divas Champion, didn't you? Because I did. I dreamed to see Naomi as Divas Championship and I think that she was robbed back there..., before Paige's debut - that was a different story that make it clear why Naomi didn't won the belt back there...

Now she got it! Alexa Bliss, WWE Universe and all of the SDLive women's division felt the GLOW, last night!

Naomi finally is there where she belong - on the top and in the history. Well, girl that was a long journey, not only for you!

When she started as a Funki-dancer for Brodus Clay, many people didn't get it. She looked underrated. When she won a major #1 Contender's Battle royal to challenge then-Divas Champion Eve Torres, the things started to come in place. Rivalries with The Bella Twins, a lot of fights on the side of the Good, some heel transition to team B.A.D. leader, some hiatus... Most importantly, she was so close to the main women's belt at the time, she was equally skilled and talented next to AJ and she lost the matches.

Now, after years of waiting and developing of her wrestling skills and character, Naomi is a WWE SmackDown Women's Champion, defeating one fierce opponent in the face of Alexa Bliss. For me Naomi is one of those natural talents, who shine bright, aside from the fact that she didn't have a wrestling background of any kind. Her victory is well deserved and it opens the door for a lot more competition. I can even see who is next on the line, after Bliss re-match clause evocation of course  - Mickie James! We may see and Natalya trying to compete for the top price, but I think that Mickie is the next one who deserve a reign!

But now, most importantly is to appreciate Naomi's victory and to congartulate her!