AT LAST... NAOMI IS ENTERING THE TITLE PICTURE! 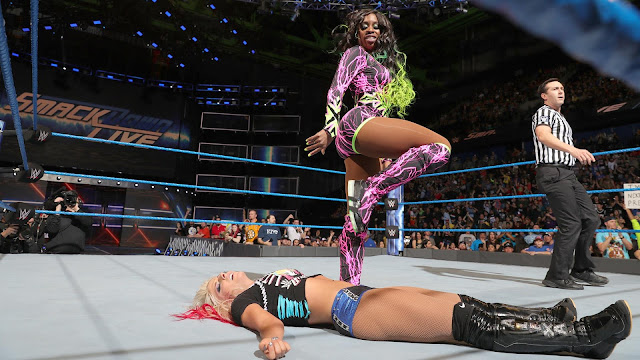 Two pins in a short period of time!


Naomi is amazing athlete and this is not her first title shot. She was so near to winning WWE Divas Championship in the past, now she is even closer to get SDL Women's title, than ever.

Pinning the Champ (two times in a 3 days period) is a great way to make a statement and actually this is RAW vs. SmackDown Live's greatest women's moment of the week.

Naomi is great, Champion material. She is well prepared to win and retain this title for a long, long time. Maybe she will not acquired the title from the first shot, bur she deserves to be involved in this dynamic Blue Brand division's title picture.

The former Funkadactyle is ready for this opportunity and all of the WWE Universe can see it, even those who don't follow her career or are not interested in women's wrestling. The reaction of the crowd speaks, for itself - people want to see Naomi fighting for the gold. And win it! Most importantly - Naomi deserve this, she was passed by this opportunity so many times and now is her moment. She's in a top shape. Her moves set is great. She performs with professionalism. #GiveNaomiATitleReign!

Now when Mickie James is back, Naomi is taking control over the #1 Contender's spot and Natalya and Nikki Bella's feud is just getting started, SD Live is leading as a brand with great division and storylines... oh, and don't forget the war between The Miz & Maryse and Renee Young and Dean Ambrose, too. RAW is losing, with Charlotte's old rivalries exposed and used as a center of RAW women's storylines. RAW desperately needs to promote the other female talents in it's roster. To bring some well known and wanted faces, like Emmalina (come on her (re)debut is like a George R.R. Martin's last book premier - delayed for the next year or for the unknown period of time like - for eternity). At this point SD Live is finding a way to display all of it's talents and give them an opportunity!