I will not speak about Nia Jax, Sasha Banks and Charlotte's matches. Neither for Alexa Bliss' second reign after a battle against Becky Lynch. I won't speak about Maryse's surprising interference against Nikki Bella, in the second's match against Natalya. Oh... and Emma is missing again!

You have witnessed all of this! 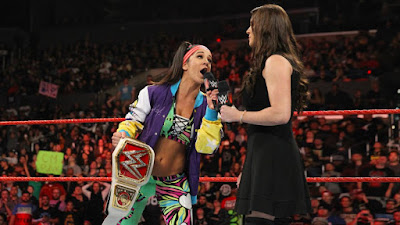 This week WWE, had decided to experiment with how much Authority abuse, WWE Universe could handle!

We are starting with RAW.

In a very intensive, but poor of background support, Stephanie McMahon challenge Bayley's ethic as Champion. Stephanie's kayfabe dislike of Bayley is strange and its only purpose is to make The Million Dollar Princess to look like total jerk (and it makes people thinks why the babyface Superstars are not fleeing to SmackDown Live).

To have the Commissioner asking her Women's Champion to relinquish the title, because the victory was unfair, after you have a previous Champion, who retain her title most of the time via interference and cheap shots, is more than absurd - it's RIDICULOUS TO IDIOTIC! Maybe it's just a cheap heat earning for heel and pushing of two faces - Banks and Bayley!

I don't know who buy this! I prefer to watch Nia Jax squashing infamous local competitors! 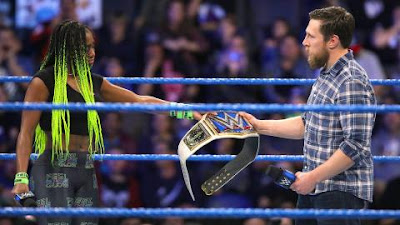 Our other favorite Women's champion of the Blue brand, didn't have that luck. Naomi was forced to relinquish her, hardly won, long awaited title belt.

If this is an injury angle, that is created to push Bliss, back on the top, it's really, really cruel! Since we didn't have any 100% confirmed information about that injury. After her win at Elimination Chamber, there was some moment, that you can see that she felt something like a discomfort in her leg. But we are not sure if this is not a planned twist, to create a possibility for WrestleMania' match for the belt between Alexa and Naomi.

What we have at the end? RAW women's division is running in circle and instead of some heel push for Emma, everything went back to Charlotte-Bayley-Sasha, triangle! Maybe this is their plan for WrestleMania or maybe the 'evil' boss Stephanie is planning a Battle Royal or Gauntlet match, even a well forgotten Championship Scrumble, for Bayley, in another attempt to remove her from the top position, allowing the whole women's roster to compete against The Hugger.

SmackDown Live did a step back, too. It's nice to see Alexa Bliss standing as two-times SD Women's Champion, but we are back in the situation where everything will be concentrated around Alexa-Becky-Mickie. We, in AWOW still hoping that Naomi will return for WrestleMania and she will challenge Bliss in a sort of extreme match - Why Not LADDERS MATCH!