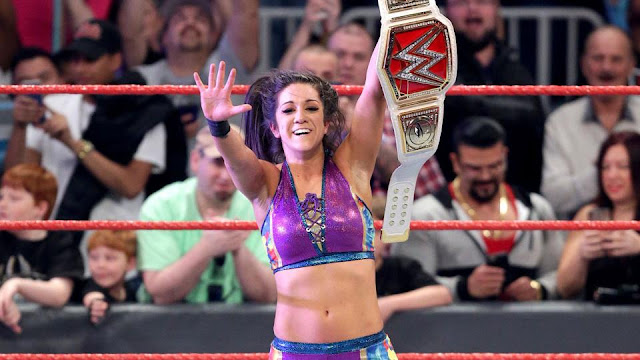 It's Bayley's Week!
After the Sunday's emotional victory of Naomi, Monday night RAW continued to bring surprises - first 'Emmalina' returned and announced the new makeover from Emmalina to Emma, shocking the WWE Universe, then the night ended with amazing coronation of a new RAW Women's Champion

You deserve it kido!

Really good, full of twists match! It was a Main event. too, let's not forgot that! When I first read that Dana and Sasha interfere I thought to myself 'Well, nothing new!' . But when I watch it... It was just great... That moment when Bayley locked Charlotte in a Figure 4 Submission - it was amazing. And the way The Boss crutch-ed, the way for Bayley's win was great too. I don't know how Sasha will survive without her new weapon!!!

At the end the new crowned champion celebrated with the audience, with tears of joy coming out of her eyes! Well, deserved and long awaited victory! Now, the door is open for new contenders like Nia Jax, Emma, Dana Brooke and Alicia Fox. Of course Charlotte will have her rematch clause evoke soon, and we desperately hope that Bayley will put an end of the Queen's PPVs winning streak (eventually). This, RAW women's division is starting to get some fresh air, at last. I hope that they will let Charlotte took some time off, and Bayley to reign for more than a month, with a lot more competition to come for her. 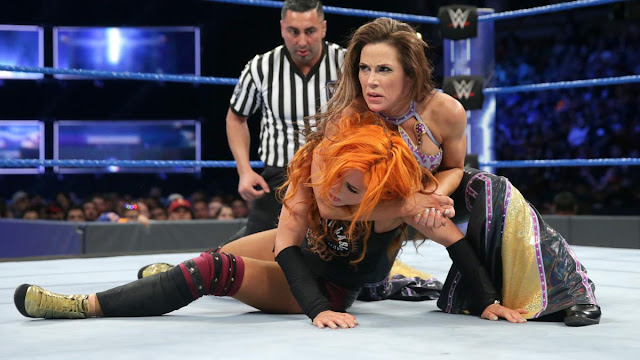 While Bayley's win is obviously the biggest and the top moment of the week, the veteran Mickie James, used old-school heel's dirty tricks, to steal one win over The Irish Lass Kicker Becky Lynch.

The match was competitive and really worked well for James-Lynch's rivalry. As the only match of the evening it was a good showdown. 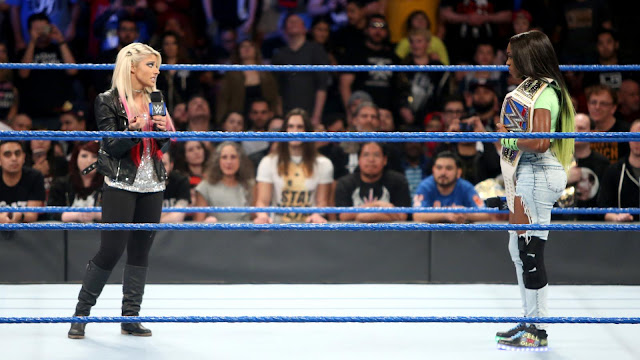 Well, after the euphoria, the newly crowned SmackDown Women's Champion give us the second cold shower (after 'Emmalina's premiere'). Is her injury legitimate or it's a dramatic kayfabe, we don't know.

This in-ring angle was enough to equal the score with RAW! Especially with Alexa Bliss doing what she does better - talking an insulting things in someone's face. Lexi is amazing heel, the top one in SDL! Of course no one can beat Charlotte's villainous character, but Bliss' efforts are really good.  She really knows how to work with the mic. I love her character! But I miss her Harley Queen Gimmick, with a pig-tails I don't know why they drop that gimmick and didn't explore it! 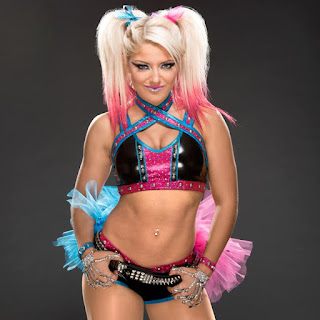 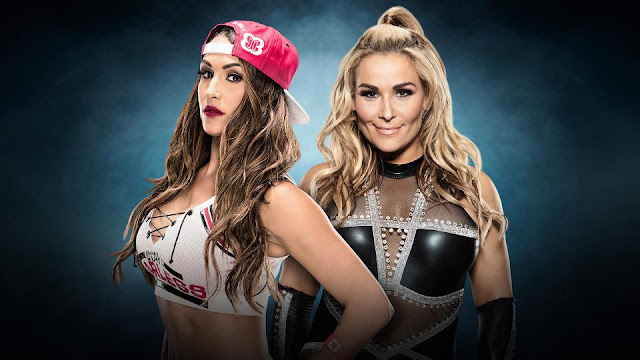 For another week in a row, we have a backstage segment that includes Natalya and Nikki Bella's High school girls'-type rivalry!
This time we had Daniel Bryan directly involved and pissed off, like we are and he set a really interesting match for the next show - Falls Count Anywhere. Now the High school girls' fight is turning into another Hardcore challenge for Nikki after her No DQ battle against Carmella, last year. For Nattie, who was a part of the first ever then-Divas Tag team Tables match, this is nothing new. She had that hardcore edge in her character, so we can only pray to see a good match between them both.
For me this is not enough to beat RAW's two women's events, even Bayley's title victory deserves to add 2 points and it's 3:2 for RAW, this week! The announcement for Falls Count Anywhere match compensate for the Naomi's reign threatening  injury angle. Emmalina's short, but electrifying appearance for me is equal to both non-wrestling segments. It had an amazing psychological effect! As we said it Bayley's title win in the Main Event of RAW is the women's event of the week. 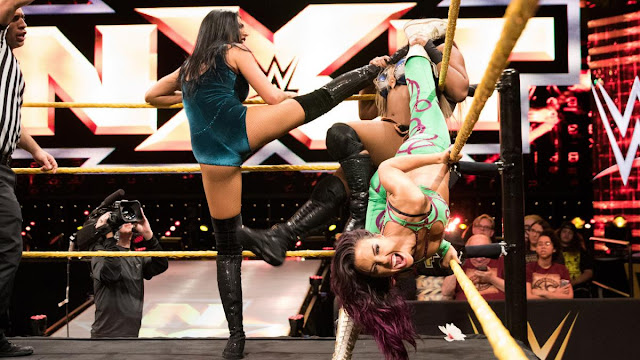 But what about NXT?
NXT women's division really needs some new faces to be promoted to it's roster! It needs Nikki Cross vs. Asuka match, for the belt! It needs Ember Moon as #1 Contender!
For me Moon is sort of a robbed, from opportunities. That first TV loss, is nothing compared to her singles winning streak on TV. And it wasn't her fault! Of course it's nice to see Liv Morgan being pushed - that young woman is really hungry for wrestling and she always tries new things in the ring. The Iconic Aussies are in their top shape, too. As NXT's top villains they really deserve more title opportunities, but not before Ember Moon and Nikki Cross.
This another number 1 Contender'd Triple Threat match between Morgan, Moon and Royce(this time) is good idea, but it's a sort of 'staying in one place' for Ember, who already loss enough time and heat fighting the likes of Liv and Aliyah, instead being part of the Title's picture, where she deserves to be.
NXT needs to promote some recruites from the previous PC class, like Danielle Kamela and Macey Evans/Estrella. It would be good to see Daria Berenato and Mandy Rose, why not Sarah Bridges, too. At this point it looks static and it's not good.
We need some new faces and stories!
By S.K. at February 14, 2017