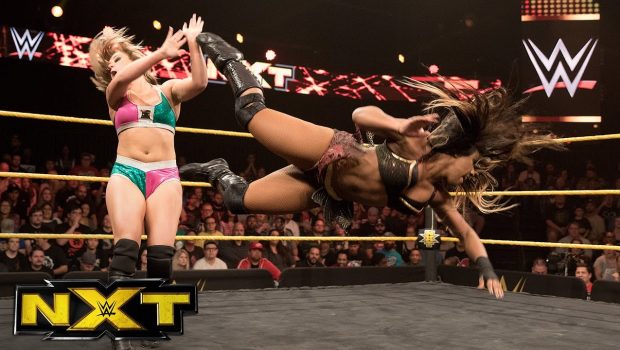 What is the common between all this women, except the fact that they are familiar to the independent women's wrestling fans from SHINE, SHIMMER and WSU?

All of them were sort of honored by WWE NXT, with the opportunity to compete in their ring (jobbing most of the time - actually Leva Bates as Blue Pants defeated Carmella in one of their matches). All of this amazing women didn't have the luck to get signed, even on open contracts!

This week we saw another great name added to that unofficial roster - KIMBER LEE!

1/2 of the Kimber Bombs, competed for SHIMMER, SHINE, WSU and CHIKARA, now Kimber get the opportunity to face a fellow former-indie veteran Ember Moon. Of course Lee's role was to lose, but it was nice to see that NXT can allow to involve a well known faces, from the outside. We really love that.

Of course we hope to see this women and some other in the all-women's tournament that we have heard about on WWE Network in 2017 - if they add Taeler Hendrix, Heidi Lovelace, Velvet Sky, Angelina Love and even Ivelisse, that will be just great!

Until this tournament happens we can hope to see more and more indie faces in NXT and why not for a long, long time.
By S.K. at December 08, 2016