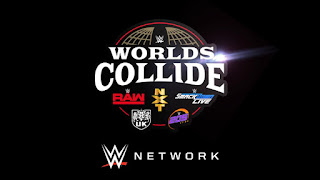 I was very excited about this Battle Royal, highly dominated by the original NXT competitors presence.

Now I am looking at the picture down there and I think: Why they didn't add more NXT UK competitors like Killer Kelly, Xia Brookside, Nina Samuels, Jinny, and Isla Dawn? A little bit disappointing...

But it was exciting to watch! 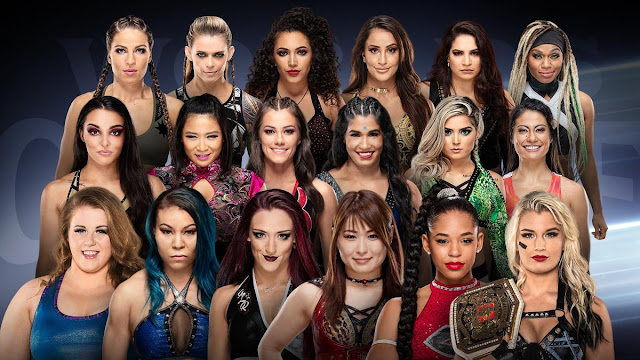 Looking at the picture we can see the future of WWE and this image is like a ray of light after the past weeks crumble of the Main Roster and the controversy surrounding MITB.

I love the participants' selection (you know that it was taped around WrestleMania, do you?), the idea of having people who are from different brands and different sides of the ocean to meet each other in a multi-contestant fight. And it was almost 30 min.

It's hard to describe all the action. We had two established teams working as wolf-packs and destroying the competition collectively - Borne & Boujee of Aliyah and Vanessa Borne and the MMA Horsewomen's own Marina Shafir and Jessamyn Duke. The interesting part about the last team was that Shafir accidentally eliminated her teammate, after a wave of terror they caused.

Talking about terror! Reina Gonzalez was almost unstoppable eliminating whoever stood on her way including Kacy Catanzaro and Kavita Devi.

Piper Niven and Kay Lee Ray started the match by attacking each other. Both UK Superstars added a lot of drama to the match. In the end, Piper was eliminated by Borne and Boujee who were eliminated on their turn, collectively by Toni Storm and Io Shirai.

The final four were Reina Gonzalez, Toni Storm, Io Shirai, and Bianca Belair. Gonzalez left the match soon eliminated by the Genious Of The Sky. Meanwhile, Belair outpowered Storm... We had a dramatic fight with one stunning 619 by Shirai and divided support from the fans.

In the end, The EST of NXT used gorilla press hold over her head to just throw away Io, who had missed a dropkick.

It's nice to see Belair winning that match, despite the tones of talents with more experience in it. I think that this is all about another NXT Women's Title opportunity. That is kind of Charlotte vs. Becky, but not enough matches yet, to make you scream from annoyance.

My biggest problem here is the way they booked Io Shirai! What's going on guys? Why are you pushing her backward? You want her to face Belair for the belt? It looks like that... and I am not OK with it. I think many fans and analysts are not Okay with that. I think that most of us want to see Io Shirai defeating Shayna Baszler.

I am a little bit sad about Piper's elimination, but I got the idea- Borne and Bojee needs more heat!

Overall, the match was really great and fun to watch! At one point you don't know where to look closer! There was action everywhere! Really good Battle Royal!