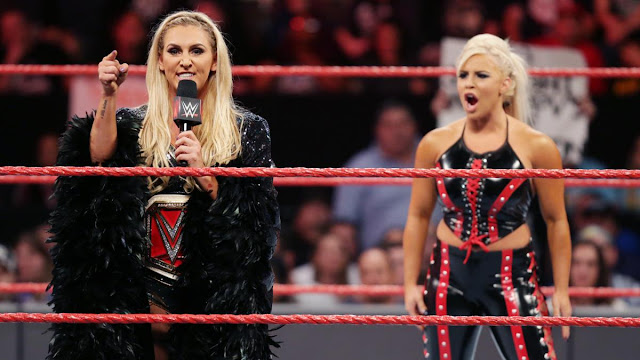 This is not a review.

I realized that you can go and found the results, so you don't need it. Last Monday's night RAW - well it losses me at the point where Dana Brooke returned to Charlotte, like nothing was happened.

After a expected turn, we get that!

Dana's character as a face of stupidity and addiction The poor little rookie, who can do nothing on her own. She needs guidance and if it's not from Emma, it would be from Charlotte. So disappointing. Now even her single victory over Paige, looks like a fluke.

The tag team match was regular, nice, a little bit of preview of what will be happening at Sunday's Clash of Champions.

This Monday's RAW is even worst! Bayley is send to replace Nia Jax by defeating a local talent. Sasha talk the talk and made a clean up of the ring by herself.

What to analyze? That we are at the same point, from where we started! That I am sick of that protegee storyline!

Actaully I have a new idea about it if they want to have that Charlotte-Dana complication.

SmackDown Live wasn't far different. Contract signing, ending in a brawl - we have seen it before! Tag team match ended in a no-contest - every match who involved Carmella and Nikki Bella, and is not set on PPV ending with The Princess attack over the Total Bella.

I hope that tonight's SmackDown Live will bring something new on the table.
By S.K. at September 27, 2016