THE WEEK OF BACKLASH pt.1: ALL ACTIVE WOMEN ON DISPLAY! 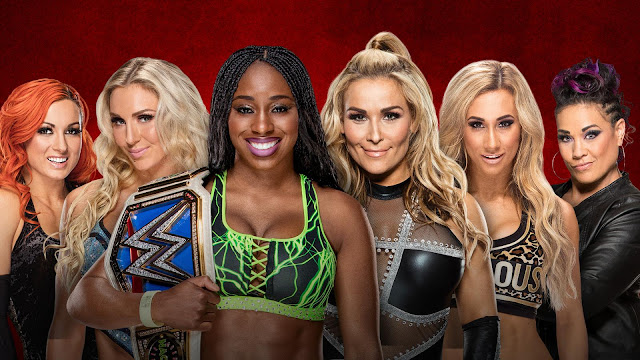 This weekend we will have the opportunity to watch the whole WWE SmackDown Live women's (active) division in action. It's not for the title, but it will be nice, because it involves six-top women.

But don't forget about NXT Takeove: Chicago! For me the demoted to Triple Threat Title match, clash between Nikki Cross, Ruby Riot and the Champ Asuka, will be one of the greatest picks of the week. It's my personal choice for a Great booked match.

SMACK DOWN LIVE 3 VS. 3 TAG TEAM MATCH
(WE HOPE IT WILL EVOLVE INTO ELIMINATIONS TAG TEAM, SOMEHOW) 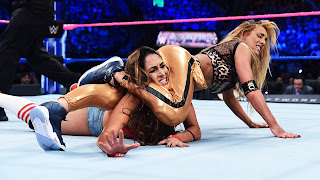 First, WWE.com remind me that Carmella /w. James Ellsworth/ has scored two pins against the reigning champion Naomi, these past weeks. Actually the second one happened yesterday, after another distraction by The Princess of Staten Island's fellows. It's nice to see her getting some push into the title picture. I dare to predict a one-on-one or Triple Threat title match (involving Charlotte Flair) for Carmella in the future, which will be so fresh for the Blue brand. Carmella is a really good as character, gimmick and wrestling skills. She deserves a shot at the gold! 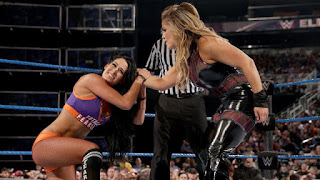 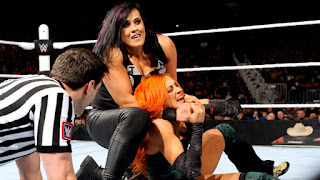 But what about the veterans? Tamina and Natalya are stuck into the competition and heel characters re-establishment. They just are in a helping mode! The phase where they can help the new talents to shine bright, without taking a lot of damage on their own careers. This alliance between them, plus Carmella and Ellsworth is really interesting and I am looking forward how it will evolve and what they will accomplish. I love and respect these two amazing women, who decided to fight, not to retire. Their role is really vital for the next breed of female talents. 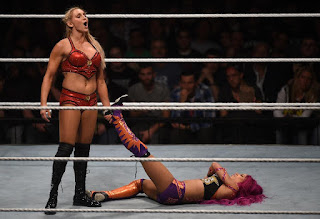 Charlotte Flair's turn! I am not 100% that she is fully turned into face. Her gimmick is frozen for a while into the "tweener's zone" - nor face, nor heel neither. That's good at this point. It's logical, to ally yourself with the other victims of the Nattie's crew terror. Charlotte made a statement, yesterday, that she is still focused on the main goal - WWE SmackDown Women's Championship. 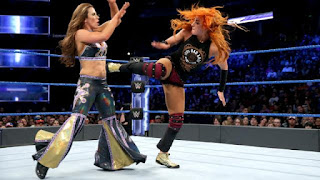 It's nice to see Becky Lynch, after her short absence, returning in this interesting manner - luring the Heels trio, that she is their ally and then attacking them! Nice! It's nice to see Becky staying on the side of the good and kind of reunited with Charlotte. I hope to see a lot of Straight Fire at Backlash, his Sunday. 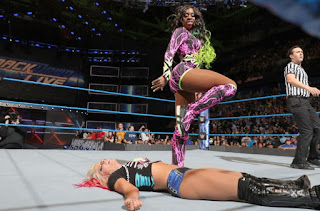 Naomi is kind of in front and aside. Her involvement with Charlotte and that war with the vicious three, kind of put her in position to share the light with 6 other persons (including Ellsworth). Nothing wrong with that. It's nice to see the whole division working together. I am sure that after this tag team battle, we will see the things went down to three or four people. Naomi against Charlotte and Carmella or Natalya.

Who will win? I don't know. I want Naomi's team to win, but if they really want to push Carmella into the title picture, her team, The Princess herself, must win that match. I am willing to predict that team Nattie, Tamina and Carmella will win the match.

Actually we are more curious about Lana's debut for the Blue brand and what role she will play! She's a spicy addition to the Tuesday nights! 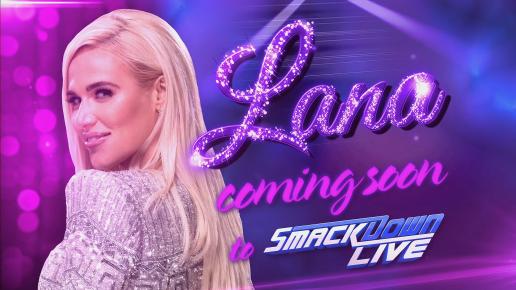