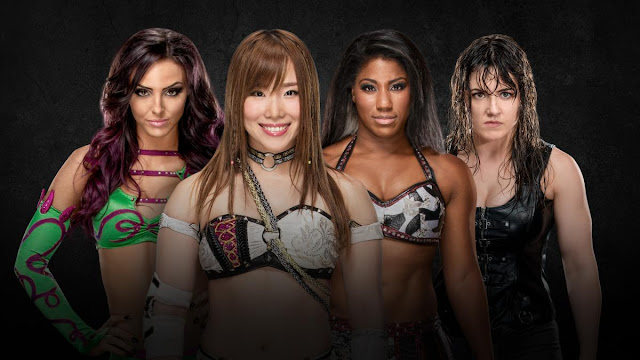 The weeks prior Survivor Series Weekend were full of qualifying matches and that fever didn't pass the ladies of NXT, who have their own Battle for Supremacy and their biggest reward for the winner - The NXT Women's Championship!

After the undefeated Empress of Tomorrow left NXT for the Main roster, a huge hole was open in the heart of the Yellow-Black brand. But, there are plenty of names, who are great enough to win the vacated belt and to try to repeat Asuka's success.


Stunning rumors circulated around the wrestling medias. Kairi Sane, was told to be awarded with the belt!!! That was ridicules even as idea! You can spit on the hard work of the other NXT/WWE PC women, who were there long before Sane. Talents like Ember Moon, Nikki Cross, The Iconic Duo... they deserved the right to have a shot at the gold too, so the MYC winner Kairi Sane really earned the chance to try her best to win the gold, but she must face three other talents from NXT!

1/2 of the Iconic Duo, Peyton Royce received a lot of opportunities these days. Her push is more obvious than her bestie's - Billie Kay!

Royce won her spot by using Nikki Cross' distraction as a weak spot. Now her role in the Fatal-4-Way (her second 4-way for the belt) is kind of unclear. Because Royce is someone with potential, but is she capable of catching the gold?

We think that her chances are not that bad, with Billie ringside. She is innovative and use a lot of power moves and hits, despite her gracious figure. But part of me, especially, have the feeling that she may put a good fight and create a lot of intrigues, but will not win the match!

The Scottish Sensation has one of the amazing evolution as a character and earned a special place in every NXT Universe fan's heart!

I love her fights with Asuka, her rivalry with Ruby Riot, now I am so into the idea to see her receiving another chance to win this belt, after a several attempts. I am so happy about her second chance and winning or not I want to see what's in store for her (I hope a brutal payback against The Iconic Duo and more fights against Taynara Conti or the new NXT Tv Roster additions - Bianca Belair and Lacey Evans, and Vanessa Borne of course).

The War Goddess of NXT is one of our all-time favorite since vignette and match number one!

I really enjoy her amazing wrestling style, her dangerous finisher and her rivalries, especially that with Asuka! That was epic! Ember Moon is someone who I really wish to see ending  winning this match. She's suitable and athletic enough to win that belt! Maybe her time has finally come!

WWE NXT missed a good, positive face character, since Bayley's departure. Yeah, they have some real babyfaces, but all of them have their dark side and you can easily imagine them as a heels - I'm talking about Moon, Ruby Riot, Liv Morgan and Aliyah!

Now we have a real babyface, with amazing heroic halo, a lot of charisma, dignity and sweet gimmick!

Kairi sane is like a beam of light! Beam of pomposity! She is like a walking dream! She has dignity and sportsmanship! The Pirate Princess gimick is really something new and colorful. I think that Sane is a huge threat in this match, a threat equal to Ember Moon!

But I wish to see her winning the belt in 1-on-1 match, against Moon, especially, after a long pursuit and a lot of opponents to receive her Diving Elbow, on her way!

All four contestant deserve to be in this match, and deserve on different level to win the NXT Women's Champion!