Friday Night SmackDown gave us what it promised to give us! All announced matches were there. No surprises. No twists. Even an interview with two of the most underrated competitors in the women's MITB Ladder match! 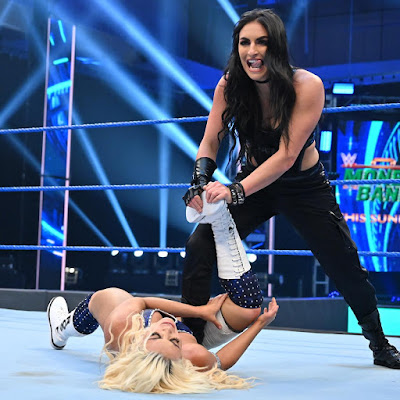 The opened with Sonya Deville and Mandy Rose who had a really dynamic and emotional match. Rose dominate which was a really good decision and she laid off and out her frustration. I love the spots, I love the dominance of Mandy I like the sneaky, last-breath finish by Deville. It was sneaky aside from the fact that it was just a roll-up. there was some hold on the opponent's shorts. Nice match. Nice developing of the story - I don't think it's finished and it has some more fuel in it. Maybe for the next PPV's Kickoff! 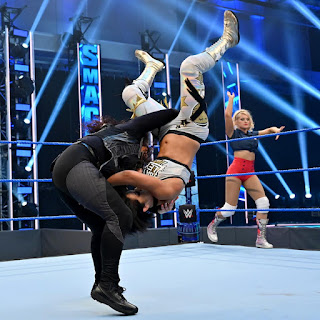 Bayley and Sasha Banks' showdown with Lacey Evans and Tamina, ended as I predict it. The Challenger stole one before Sunday. They had really great match. Our favorite in-action drama, was there whole the time from the beginning when the Champ talked with The Boss - 'I know what's best' before both being thrown out by the impatient Tamina. Overall, the teamwork was on a higher level even for the newly teamed Evans and Tamina. I like the match, I like the end. It makes Tamina really hungry for the gold this Sunday!

We heard from Carmella and Dana Brooke, who remind us how much they deserve to be and how did they get in the women's ladder match at MITB, for different reasons. Both have a huge appetite for victory. The whole interview thing was to put them in the spotlight because the rest of the pack are so on display and everyone praise the four other women (Jax, Baszler, Asuka and Evans) for their talent and predisposition to win the briefcase, so Mella and Dana needed some PR and something backstage to be presented because of their underrated status in the match. I remind you of The Princess of Staten Island's Miss Money In The Bank history, she reminds us as well, which is not in her favor (k*yfabe talk)! 😉 🙃

Overall it was a nice preview for Sunday with the tag team match and the interview, as Rose and Deville's rivalry was there to spice the things up in addition.
RESULTS:
👍👍👍👍 SONYA DEVILLE defeated MANDY ROSE;
👍👍👍👍👍 TAMINA & LACEY EVANS defeated WWE SMACKDOWN WOMEN'S CHAMPION BAYLEY & SASHA BANKS;
👍👍 DANA BROOKE AND CARMELLA TALKED ABOUT THEIR PATH AND GOALS AT MITB, THIS SUNDAY
By AWOW at May 09, 2020