After intensive and full of memorable matches tournament we reached the point, where everything is boiling up! The Semifinal was even more dramatic with its Mentor vs. Student clash, Smaller vs. Bigger disadvantage.

Really dramatic way to mick out the Final - the Grand Finale! 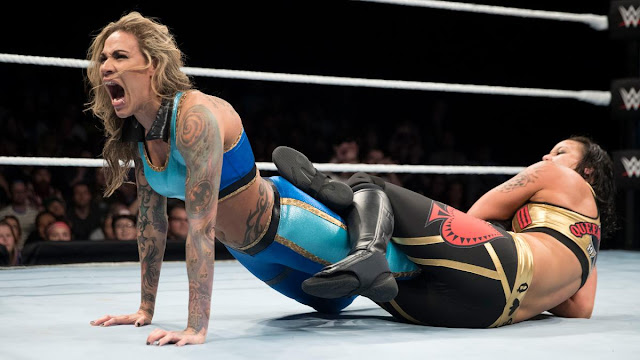 The evening kick-start match between Shayna Baszler and her mentor Mercedes Martinez, was one you need to watch again! 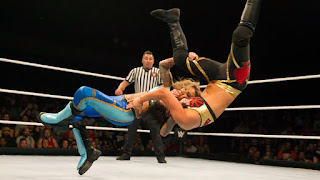 I needed to reply some moments, because some things happened really quick. But overall we saw the match starting with both women showing respect to each other (the first time Baszler did a handshake). That brings that emotional charge and state, that we all needed. This was one of those matches, who really told us a story : a story about the desire to success at any cost and how you need to be professional and to left all private feelings in between, when the time for competition is coming!

We have seen it before! We saw it now, really intensive and highly emotional! 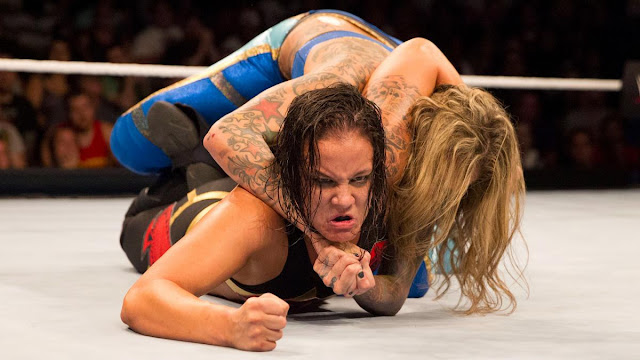 Many suplexes, chops and submissions were involved at 100%. The dominant beginning for Mercedes Martinez looked really great. The fans were sort of divided. After Baszler's insult over Candice LeRae, she received some (wanted) negative heat! So, to see Martinez slapping and holding her in submission was sort of redemption! 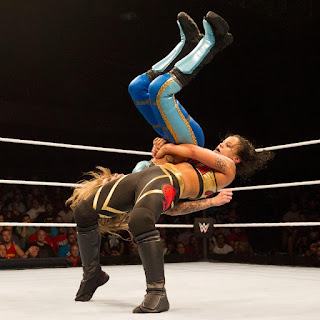 Like it or not, Baszler prove to be tricky and confident in her game plan villain. She took as much as she can and at the end, used every little mistake of her mentor to dominate - like throwing her like a puppet around the ring with an ease. One of the top heated moments was when Shayna survived the Fisherman's Buster. This was the sign of the Martinez' Downfall! The 16-years veteran desperately tried to apply the move at the end of the match just to end in the Baszler's ruthless Rear Naked Choke! 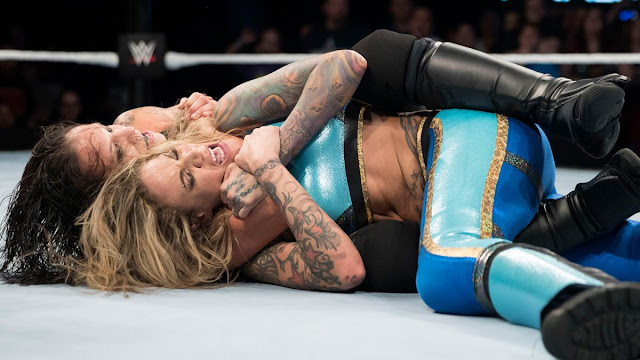 So my 'favorite' bully emerges victorious. With emotional post-match hugs and congratulations from Triple H, Sara Amato and Stephanie McMahon. Shayna Baszler is going to the Final! 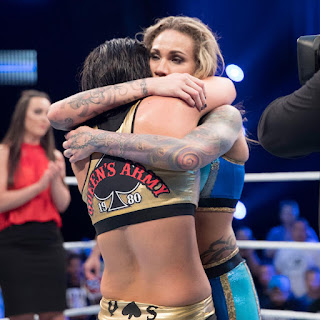 WINNER: SHAYNA BASZLER (US), via submission 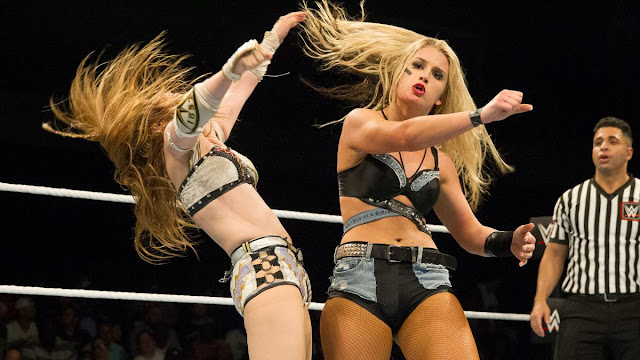 Both Kairi and Toni walked a hard and honorable way to the Semifinal! Both faced a lot of challenges, that almost ended their road and they survived it all!

They almost didn't survive their own clash! 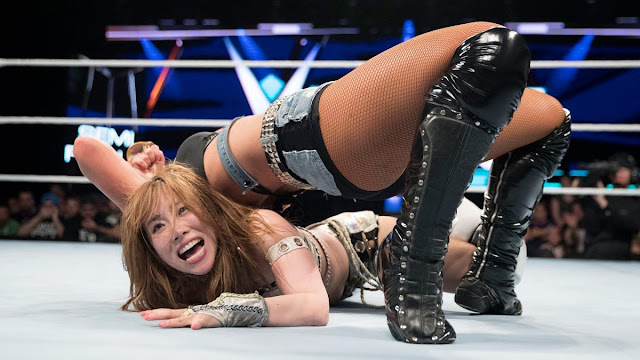 Kairi Sane is so fine and slim, and so light, girls. She looks like someone you can easy broke! And Toni Storm tried her best to do it... At some point this match was too emotional and hard to watch. I was divided, because it was painful and really great build at the same time. I don't know how many of you saw the patches on Sane's neck and realize that these young Japanese girl was ready to sacrifice everything for the art of wrestling and WWE Universe. "But this is their job! I am paying to watch it!". Yes, you are paying to watch a show, not a sadism - I think we have enough of it in our lives! In this case its more masochism - because if someone has read my short analysis about the Japanese women wrestlers, he/she might remember that I pointed this state of mind that they have - ready to sacrifice everything, just in the name of the win or the show! 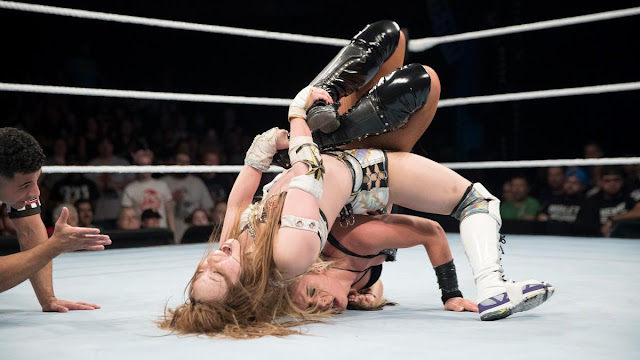 Kairi Sane really deserved to win this match! Damn, this girls smashed her face in the ramp, for the show! Respect and love, Kairi!

Toni Storm on the other hand was ruthless. Not in the way of Shayna Baszler! She was ruthless in professional, competitive way. She used every single powerful move and hit in her arsenal, to emerge victorious! Her modified neckbreaker on Kairi, the arm lock, all of her moves was meant to hurt and to bring her the victory! 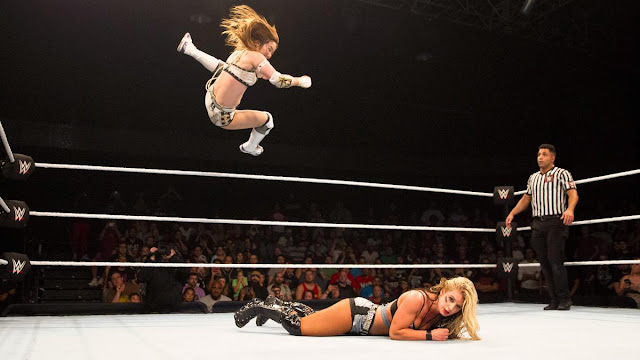 That match was really hard and epic! But it was the kind of match, that I enjoy to watch, because I have two amazing and respectful competitors and characters. Post match, when Kairi won, by hitting her devastating Diving Elbow on Storm's back, both women showed a real sportsmanship and unbelievable respect! Real honor! Actually, Kairi Sane did her other goal to leave a mark if not on all of the 32-women, then just to the four women she met - Tessa Blanchard, Bianca Belair, Dakota Kai and Toni Storm!

Deep bow down and respect for both of them! 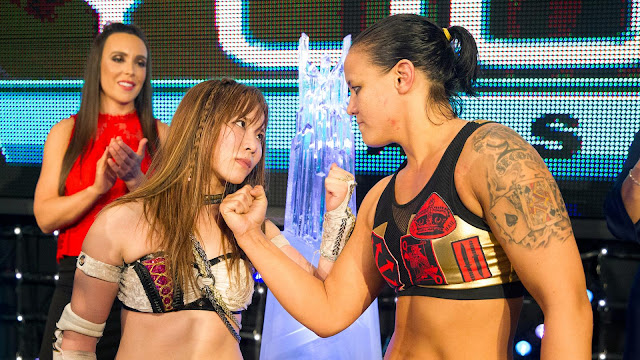 At some poitn I thought that there will be a match in between the Semifinal, match of the eliminated Superstars, but when I saw that 20 and over miutes were passing by, since match one, I get that there will be no rest and that the following match will be broadcasted.

OK! Curtain falls! I am stop playing and pretending. Many of us knew the results! Many of us knew who will emerge to the Final... But many of us, wanted to see how it happened! Because it was important not only to know WHO! For me it was important to see and know HOW! And I am not sorry, to watch the whole tournament... OMG! There was a time (like in the Piper Niven vs. Toni Storm), when I screamed against the screen "Come on! You can do it!" and then I realize that the competitor that I am supporting has already lost the match in July! That is how this amazing WWE, NXT and Paul Levesque's tournament magic worked on me! I was devoted on 100% to this event, even after my first disappointment from a small and at this point not important things like 17-Americans, Deonna Purrazzo's alternate status and other things - THINGS THAT IN THE FACE OF THE COMING FINAL (LIVE NEXT WEEK ON WWE NETWORK), ARE MISERABLE WORRIES!

Kairi Sane! Shane Baszler! Both of them worked their way to the final - yes with different tools and attitude, but hard, with a lot of tears and blood! I can't wait to see the end! I guess you too, my friends! :)

Until then, we are preparing our Prediction and I will try to make it special!
By S.K. at September 08, 2017