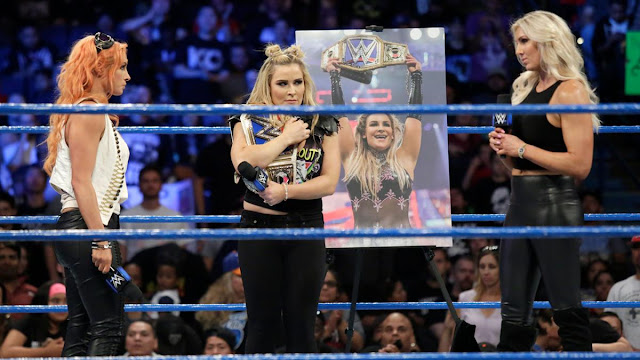 The week before No Mercy PPV is intensive for all of the three brand, despite the fact that the pay-per-view is RAW exclusive.

These days all of the three brands women's divisions are shaking up with a lot of devastating opportunities and new challenges, plus some changes on the horizon!

RAW WOMEN'S CHAMPION ALEXA BLISS VS. NIS JAX, NON-TITLE MATCH
...OR THE MATCH THAT USED TO BE AN INSTANT CLASSIC 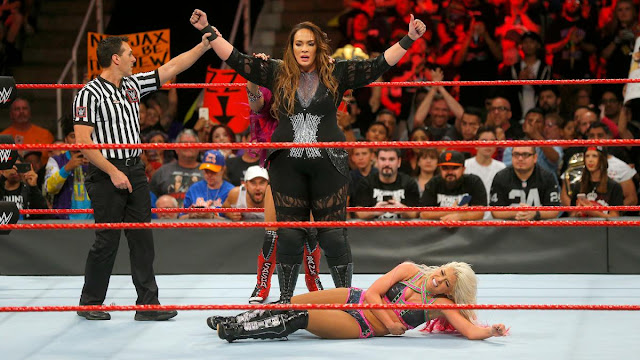 We have heard Little Miss Bliss said it for so many times: How she has dreamed about her match against Nia Jax, how it's going to be something that the fans will reply and rewind again and again on WWE Network! ... And there was someone else like Emma, Mickie James, Dana Brooke, The Boss who ruined this moment!

Now The Wicked Witch Goddess of WWE RAW, had the chance to make her dream come true! She finaly had Jax, where she wanted her...or maybe it's vice versa?! So the match was a fact! Bliss met her 'bestie'  in the ring in what may meant a painful ending, after a total demolition for the champ! 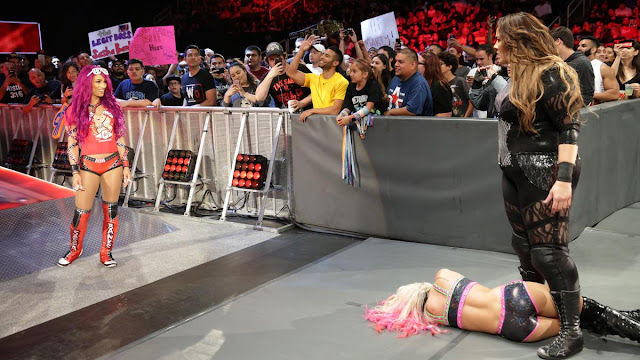 Of course Alexa used her well known strategies to ovecome the odds! She escaped the ring, ran around, and again tried to escape the match. Actually I think that the fans moral support was on Jax's side, so Bliss had another 'reason' to leave... until The Boss came down the ramp and helped Jax and even stayed to the end of the both to secure the ringside area from future escaping attempts, by Alexa.

So Nia finally nailed a solid, long expected victory over The Goddess. Her hands were raised and... The Boss happened. I don't know what excactly statement was Sasha able to do? She was smashed down, like a fly.

Then Bayley made her long anticipating return, in front of her hometown crowd, well supported.  She, Banks and Bliss took down Nia and kick her out of the ring. Nia left waving her hand in a gesture 'I will deal with you, all, this Sunday'! 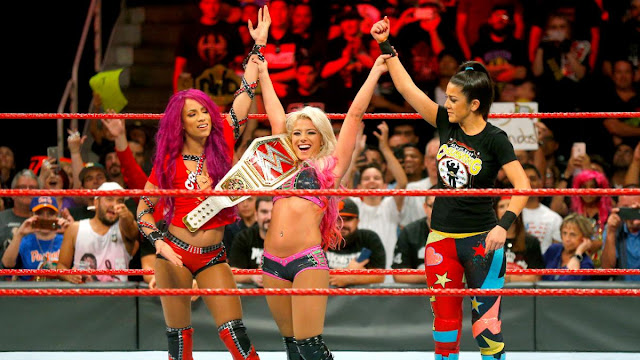 I enjoyed the moment when Alexa Bliss attempted to be friendly with her two biggest foes. Desperate attempt of making friends that ended with a collision! The two women, that she constantly humiliated! It almost looked like a face turn, until Banks and Bayley showed that nothing is forget and forgiven, by attacking the Champ. 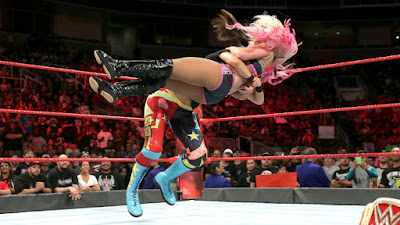 CHARLOTTE FLAIR VS. NAOMI VS. BECKY LYNCH VS. TAMINA /W. LANA/, FATAL-4-WAY MATCH FOR THE #1 CONTENDER'S SPOT
...OR TOTAL CLASH IN A 'LAND OF OPPORTUNITIES' STYLE 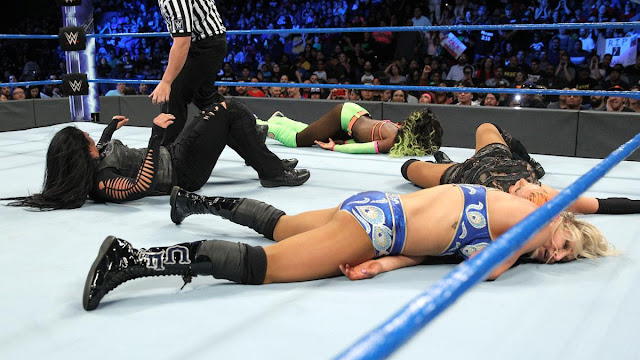 All active (except for Miss Money In the Bank Carmella) women were on display this Tuesday. SmackDown Live presented a really well packed Main Event with a lot of twists and turns.

But at the beginning there was the SEGMENT!

Charlotte Flair made her return and addressed WWE Universe, thanking them for their support. Then The Champ Natalya entered the ring to celebrate 'the women', by presenting herself as the most fabulous example for a woman. Then the film start to roll. A challenge from Charlotte. A challenge from Becky Lynch. A little bit of Glow and Challenge by Naomi. At the end Lana and Tamina emerged after a week of absence, as the Ravishing Russian made the most funny promo of the evening. Natalya decided that the ring is so crowded so she tried to make an escape, but was stopped by the GM Daniel Bryan, who booked this amazing Main Event! 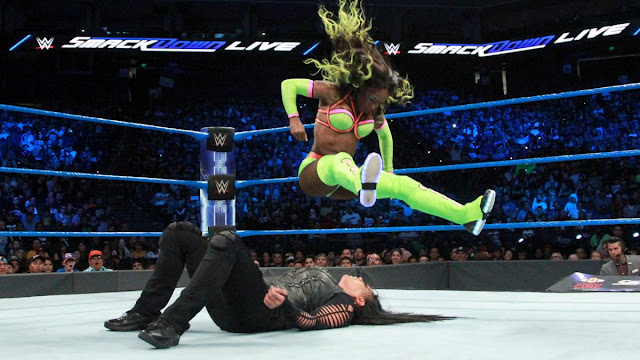 The match started with the dominance of Tamina. It's nice to see her working and smashing. Actually this match needs to be watched not described, because it was strong and really dynamic. Every woman had her moment, even Lana who pulled Naomi out of the ring, just to receive a hard kick in the head from the GLOW Messiah. 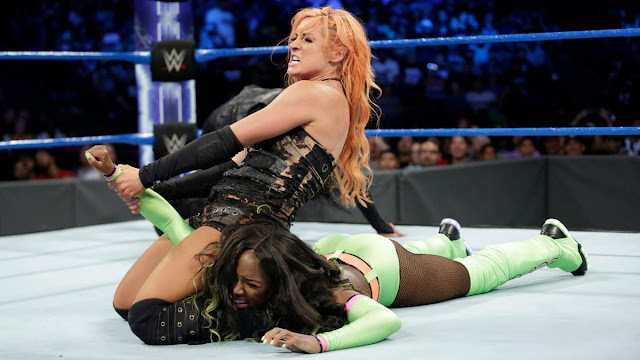 At the end Charlotte Flair earned her long awaited and deserved place - in the SDL's Women's Title picture with stunning kick in Tamina's face. So now we'll see another great episode of Natalya vs. Charlotte, but this time the places are switched - Nattie is the vileness, Charlotte is the hero! 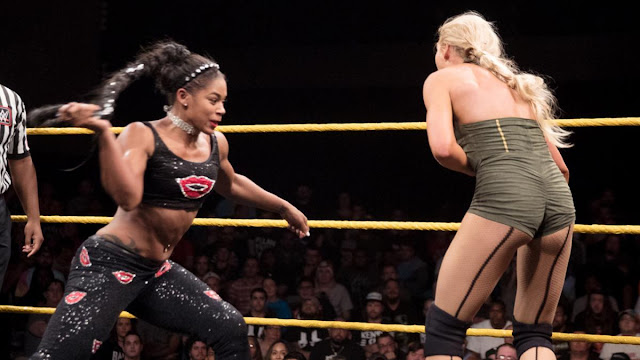 We saw it happened several times.

First time: when three of the four Horsewomen of NXT, were debuted on RAW - Charlotte, becky and Sasha.

There was always a hole left into the heart of the NXT women's division. Especially when Bayley was called to the main roster. Now with Asuka heading to Monday Night's RAW, the blank space that she left is so huge that it needs almost the whole PC's talent pool to fill it. 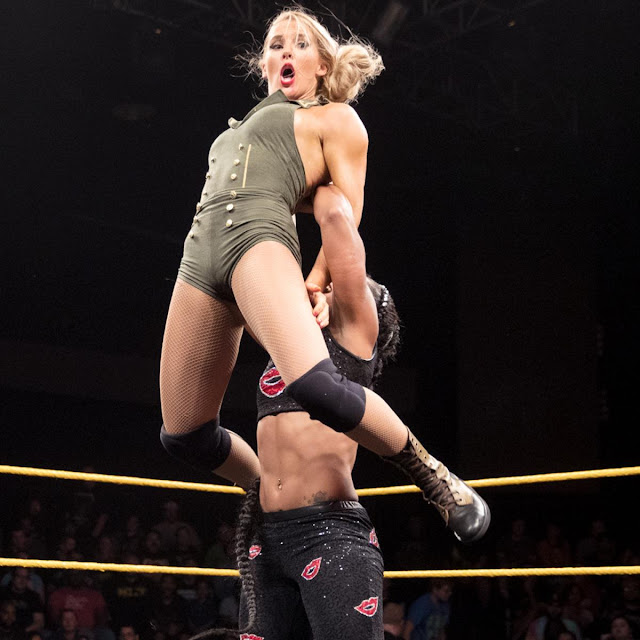 This week we saw Bianca Belair and Lacey Evans, showing us that there are future Superstars, who can contend to write a new chapter.

Both Belair and Evans were really impressive at Mae Young Classic and their participation in the tournament is something that gave them a really good kick-start. The match was under 10 minutes, but it was so intensive, so I didn't noticed that fact. Both Belair and Evans showed the best of them and of course we had a Hair whip from Bianca. 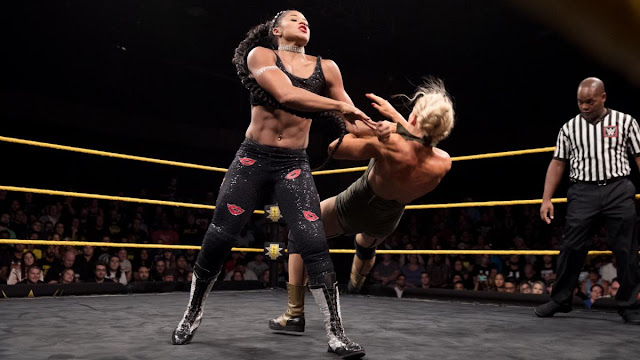 At the end the EST of NXT won, with impressive reverse powerbomb and is one step forward to enter the great picture - NXT Women's Championship, in the future!

Now with the vacated belt, there is still a long line of Superstars, who were in NXT for years, who are waiting to earn the opportunity to shine with the gold. What is coming is really, really impressive and I can't wait to see how it happened.
By S.K. at September 22, 2017