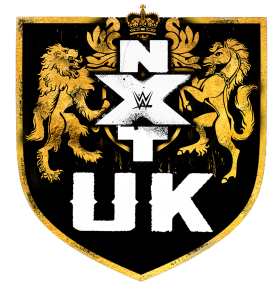 Two out of three matches were women's wrestling showdowns, last night at NXT UK. Despite the shrinking (in an idiotic manner, wait for the analysis) division the ladies once again showed what they are capable of and that they are not stepping back from their US equivalent and the main rosters. 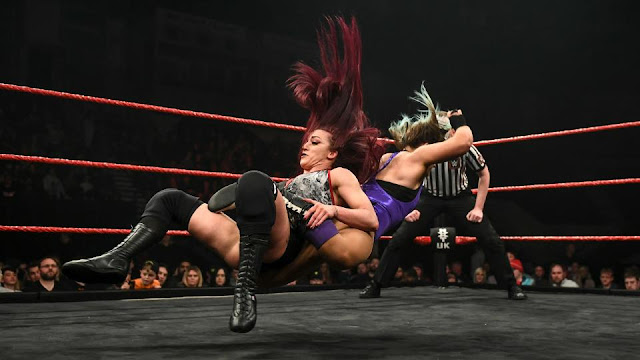 The team of The Fashionista and the title-holder, the Scary Queen of Scots prove to be way more dangerous than we can imagine. The surprise was mainly for Piper Niven and Dani Luna.

At some point, Luna tried to tag with Niven, but her partner was pulled down of the ring post by the sneaky Kay Lee Ray. Dani started to chase the evil Red Queen, just to be nailed with a stunning kick attack by Jinny.

In the end, the villainess stole the victory and the NXT UK Women's Champion concreted her dominant position on the top of the small division.

Heroes can't win all the time. Especially in wrestling. So, I am not upset by that lose, actually, it's okay and it opens the door for a continuation of current rivalries - Dani Luna vs. Jinny and KLR on her own and same with Piper - The Megaton Barbies against those two vixens.

It's nice to see one of the new signees (Dani Luna) refreshing the air in the ring by bringing something new. We hope to see more of her and we enjoy her pushed further. Piper's career didn't take any damage from this loss. No, not at all! Now she is more hungry and furious and we can't wait to see her next move.

Jinny is an astonishing heel. She doesn't look like a typical British wrestler or as a wrestler at all, but her skills can leave you breathless. I enjoyed watching her in MYC 2018 facing Toni Storm, as well in their later matches. She's a brilliant character, unique, far from typical, and at the same time so traditional egocentric heel. I really hope to see her as NXT UK Women's Champion one day, because she deserves it...

What can be said about the Champ? KLR's actions speak louder than any words and at this point, I can see only one woman, who might be able to defeat her - guess who? I'll give you a clue: Someone new and with feathers in her entrance gear... 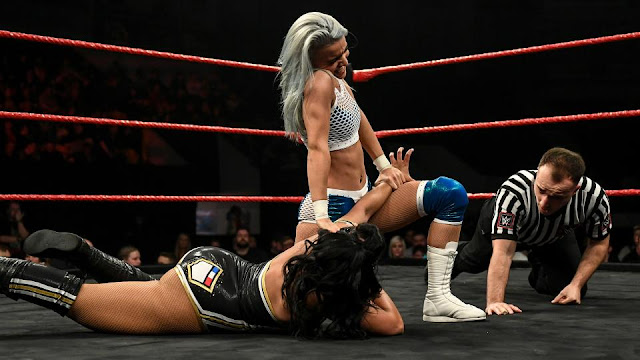 Xia Brookside is back, recovered, and ready to make a statement!

That young lady is so talented and is always a joy to watch in the ring. While Amale tried her best, the hungry for competition, more concentrate and ambitious than ever Xia was there for the victory and nothing less.

And she did it!

Xia Brookside is a wild card babyface, that spread positivity, and energy - they radiate from her appearance to her in-ring performance. She's young and she will get a lot of opportunities and I can't wait to see this happened.

For now, I am just happy that she is back and that is shifting the divisions' landscape, especially after the horrible releases of two promising talents.
By AWOW at April 03, 2020