RAW: A HISTORICAL GAUNTLET MATCH ENDED IN A "DAVID VS. GOLIATH" FASHION! 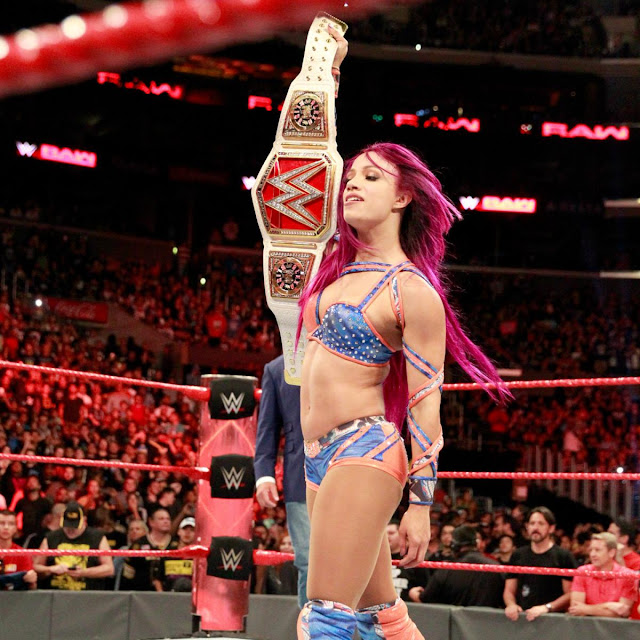 At first I was disappointed that this match wasn't for the title. Maybe it's historical as the first #1 Contender's Gauntlet match, not the first-ever (NOTE: the women's first ever wasn't that competitive - it was a Bra 'n' panties Gauntlet match, there was no title in it and it was won by Ashley Massaro, with some help from Mae Young and Fabulous Moolah. The match also involved Maria, Candice Michelle, Torrie Wilson and Victoria.). I think that they need to have a Championship Scramble match, to revive this type of match, mix between, Royal rumble, Gauntlet,Battle royal and Iron man types of matches. That will be nice.


I was kind of skeptical, when I read that it was not for the belt, and who ended it. But then I watch it. And I appreciate it. So I decide to analyze it battle by battle. Step by step! 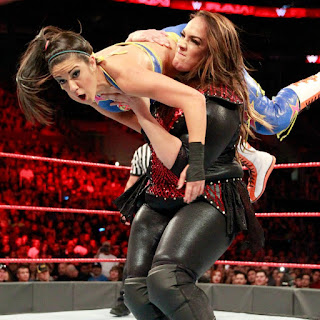 To start it with two women, one in a huge push (Nia) and the other recovering for a kendo stick fight and missing for a while (Bayley), was nice decision. You know that when you analyze this kind of events, you must check the crowds reactions too and the crowd were sort of divided, and they wanted Sasha! No, I don't think that WWE Universe doesn't love The Hugger, I think that they want to see someone else trying to steal the gold for a while, from Bliss. They were willing to see Jax or Banks.

So the beginning was really nice look in the past, where these two had a lot of tension between them. To start the match with Byaley vs. Nia was a good way to get some attention. When Nia won it it kind of show us the way the things are going. Bayley did several nice attempts to bring the Juggernaut Jax down, but at the end the raw power of Nia proved to be the major obstacle in the match.
wer 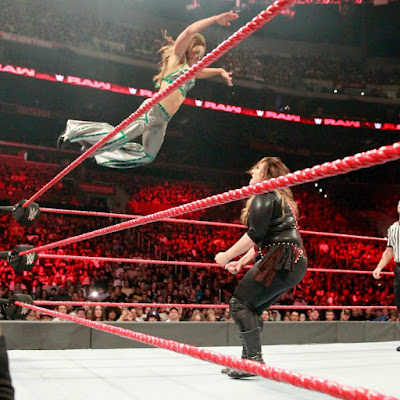 When I watch this collision , when I saw and Maria coming back, I have the strange feeling that we are looking at some time-dimension twist were veterans are facing the newest evolutionary generation.

Mickie did her best. Her Mick Kick and desperate attempt for Tornado DDT,  were a nice call from the past which was cut short by Jax's devastating Samoan Drop. This specific part of the match made me think about the James future and is it possible for her to reach any of the Women's belts in WWE. I hope that they will make some precedent for her. Actually Mickie is the proud owner of the "record" for a shortest reign as Women's Champion, when she pinned Victoria in a Triple Threat match at Live event, and later that evening she was defeated in a one on one rematch by Melina -  champion who she didn't pin in the triple threat.

I hope that Mickie's appearence is not only for boosting or reminding us of her generation and her accomplishments. In this match she put a really nice effort to win. But it wasn't meant/booked to happened! 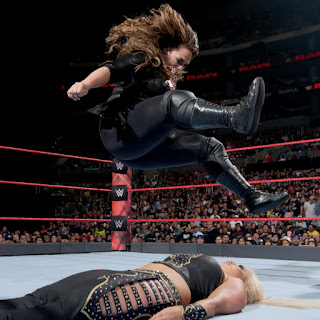 Dana's only great move in this match was her cartwheel entrance! It's amazing! I know that many people in WWE Universe don't like her. They still have a bitter taste of her heel persona and since she didn't do anything to change her appearance to suit her new role, we are still reminded of her not so-in-the past villainous character.

Dana was defeated quickly, with the Jax's simple but beautiful Leg drop - one of her first finishers. Nia and Brooke's rivalry was marked, with a little bit of trash talk and with Nia's face expresion, when she saw Dana, coming. But the newest face of WWE RAW women's division wasn't lucky in her effort to overcome her stronger and dominant foe. 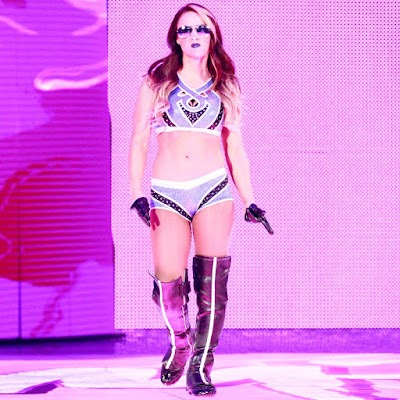 Emma did a nice choking on the ropes move at the start, then she connect it with two nice low dropkicks. And that was it. She was the third fallen victim of the Samoan drop, for the evening. After Brooke's quick defeat, I kind of knew that Emma will not last long, despite my hopes to see her putting a nice stand against Jax, like Bayley did at the beginning.

For my and many of her fans disappointment, the creatives had another for the last 15 and more minutes of this 20-23 minutes long match. 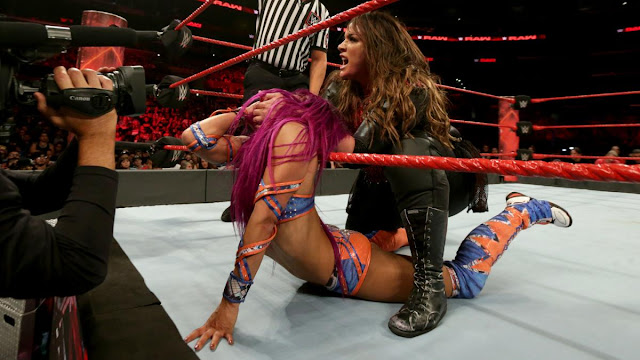 It was all about these two!

The Boss has her sight on Bliss, for weeks. Her rivalry with Jax's is one of the freshest things that happened in RAW, for a while. Now it was a time when Jax's had to be there and to work for Banks. To elevate The Boss back, in the Title's picture, as Sasha did before for Nia - helping her to be pushed nearly in the front of the women's division.

It was dynamic and well worked. As the announcers noticed  earlier, Nia became more and more confident  in her wrestling skills, every time she stepped in the ring. I love that 'silly' tactic that they tried to use - to win the match via count out! Come on! This powerful woman destroyed four other competitors, using a powerful moves and at the end she wasn't able to smash Banks? Oh, she was exhausted! Yeah! She was sweaty and tired of smashing Dana Brooke and Emma, for under 2-3 minutes, each one. 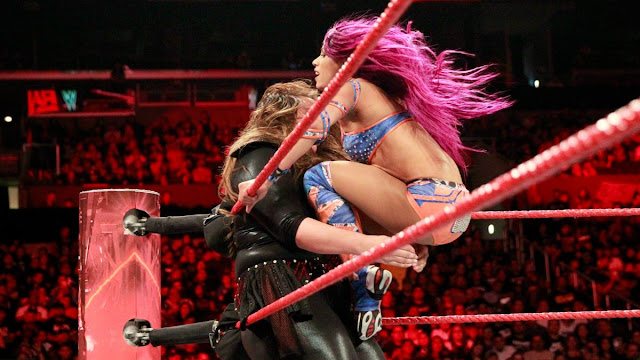 The Boss tried every tactic that she was able to think about. Of course she was totally smashed on several points, - you didn't hear me saying this: if this was a real fight she wasn't be able to enter the ring again and to finish the match. Luckily for us it's a great show, despite some booking tools and other 'secret' ingredients from the Pro-wrestling kitchen.  Banks is athletic and fast enough, (and flexible, which helped her too) to escape, ... no, no - to SURVIVE, Nia Jax! And she did it. 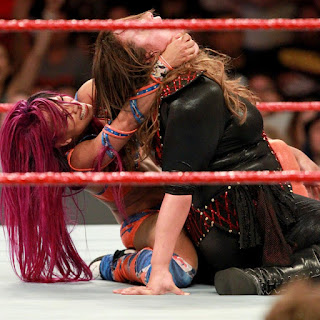 At the end, after a lot of trash talking (I love Nia's trash talking and mocking) and desperate kick-outs (the Boss is a specialist of the unexpected come backs, from the point, where everyone, could fail. She's not a three times Women's Champion for nothing!), exhausted and wet of sweat, desperately seeking for a victory, we saw the David vs. Goliath ending! The Doomed defeating The Ruthless! 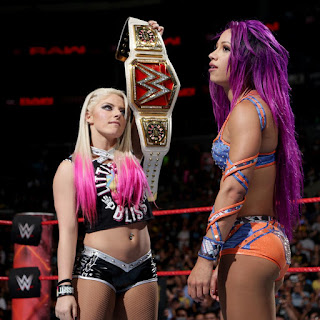 The things happened fast: Banks did a perfect knee to the head, try to connect with sort of modified Bank Statement Cross Face Submission in a standing position and received an amazing, destructive Samoan Drop, that eliminated many, before her!Rolling under the ropes! Desperate kicks in Jax's head, when she tried to pull the pink-haired fighter back. Rollin g back to the ring. Jax's hands are full with the Boss' hair. Another attempt for Samoan Drop and... here was the chance for Banks and she grab it. She locked Jax's in another innovation of her Bank Statement, by siting on her back. Jax sat down in this hold, while Sasha keep the pressure and forcing her nemesis to bent backward. And then Submission!

Sasha Banks submitted the unstoppable Jax. It was really amazing, really tough fight for both of them. At the end we had Kurt Angle, RAW's GM congratulating the new #1 Contender and of course the sellf-titled as the Goddess of WWE Alexa Bliss, waving the belt in Sasha's face and learning a hard lesson about messing with the Boss.

After almost two weeks we will have the chance to see what will happen when these two face each other fot the belt at July 09, RAW's PPV Great Balls Of Fire! Until then we have a Money in The Bank redo, SmackDown Women's Championship re-match, some Power of love teasing, Last Woman Standing NXT Women's title clash and another RAW, next Monday! 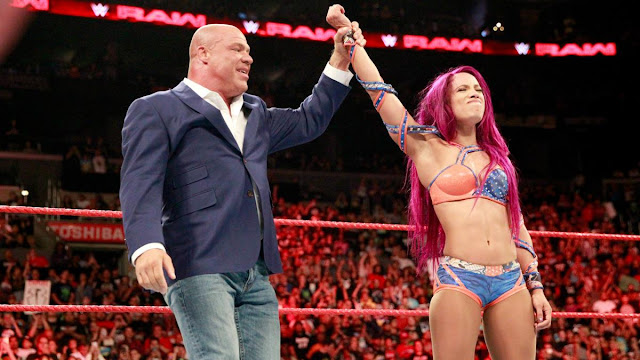 What an AMAZING WAY TO KICK START THE WEEK!