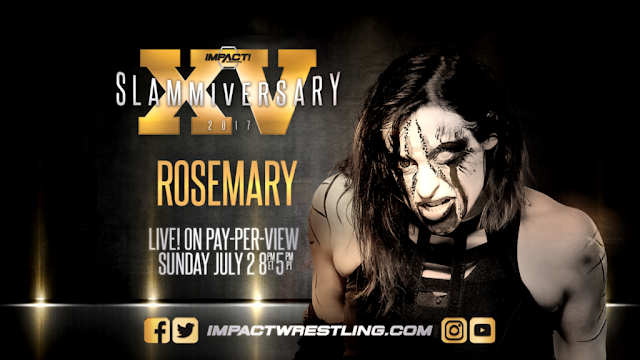 The renamed and re-branded via merging of TNA Wrestling and Global Force Wrestling second larger and famous USA promotion is serving us some surprises.

Many people, including me were watching many interesting Knockouts matches. Some of us were cursing WWE, for letting some of its talents to debut in TNA - like Tara, Mickie James (who's back to WWE) and Gail Kim. Many of us wished and still wishing to see the likes of Velvet Sky and Jade in WWE, plus Awesome Kong.

Following the footsteps of WWE (or vice versa), Impact started to hiring some really interesting and well respected indie wrestlers. Following WWE's name policy, it renames them - the women who were former indie workers.

Now the Knockouts division is a mix of well known wrestlers, some of whom return to the promotion (Gail Kim, Angelina Love, Brandi Rhodes and ODB, etc.), some who were already signed (Allie, Sienna, Laurel Van Ness and Rosemary), GFW's Christina Von Eerie and some new names like Ava Stories, Alisha Edwards, etc. Really promising reboot!

It's nice to see Angelina back! Her rivalry with Alisha Edwards is on it's way to become one of the best rivalries at this point in Impact Zone. We know for sure that Gail Kim will return after her recovery. ODB already left her ROH career and return to her home-promotion. Laurel Van Ness (Chelsea Green from SHINE and WWE Tough Enough) took a serious crazy heel turn. Allie is no more the clumsy, nice girl who served to Maria Kanellis-Bennet. Christina Von Eerie is someone familiar, to the Impact Zone's fans - she had her run with TNA, sveral years ago, as the competitor called Toxxine. And there is more. Sienna is still the woman-Juggernaut who tries to smash every Knockout.

It was sad the Mike and Marie, Reby Hardy and Jade, left the company, but it's for good eventually.

On top of everything we have ROSEMARY! She is one of the best additions as a wrestler and character, that Impact/TNA will ever have. It was just a matter of time the Zombie-like, villainous Knockout to stop fooling around and get ready for business. After a great, but short rivalry with Jade, Rosemary got at the top of the Impact's women's division as deserving Champion. I hope that she will merge the Imapct Knockouts and GFW Women's titles. That will be the top of the tops.

Last week, Rosemary saved Allie from a beat down by Sienna and Laurel Van Ness. That brings a lot of controversial about possible turn of the Champ from heel to face!  It will be interesting, how spooky character like her will work as a hero. I am actually really interested to see how it will work. She may keep her freaky style and her mean tactics, but to use them against the likes of Sienna, Angelina and Laurel.

I think that Impact Wrestling is trying its best to keep the level of the quality and it put a good fight against WWE's women's revolution. If the rumors are right and Impact has a deal with Lucha Underground, that will be just amazing, especially if women like Ivelisse, Taya, Kobra Moon and eventually Sexy Star, get involve with the Knockouts.

That will be epic!