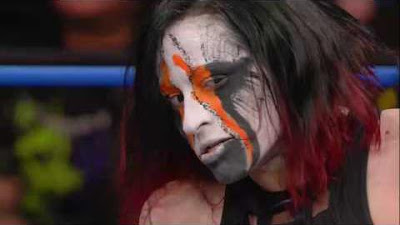 Rosemary is one of the most interesting female characters in Impact Wrestling and not only there. The reborn indie wrestler Courtney Rush into the demonic assassin, was a move that paid off. Now she is an Impact Wrestling Knockouts Champion and one of the scariest and dominant woman in this promotion.


But the last few weeks Impact Zone's fans saw a twist in the demonic entity's behavior.  We saw her terrorizing Brandi Rhodes, Jade (Mia Yim) and Gail Kim in the past, but on May 25 episode, the villainous Knockout entered the ring, when Sienna and Laurel Van Ness were beating down Allie. At the beginning, Sienna and Laurel taught that the Champ is there to join them in the assault, but then they were unpleasantly surprised: Sienna received a Green Myst in the face, then Van Ness was slammed down  in the ring.
Allie was stunned as her rivals, when Rosemary made her exit without a word.

At June 8 episode, Allie tried to return the favor saving the Champ from another post-match beat down by Sienna and Laurel.

This storyline is something that worth to be watched. It's nice to see this two amazing indie talents working together as a in a strange alliance. I like the way the Impact creatives decided to try something different for these two, not to force them against each other, but to unite them, for a while.

Soon Rosemary will face Sienna for unification of the GFW Women's title and Impact Wrestling Knockouts belt. Her alliance with Allie may be for good or for worst if the blond sweetheart cost the Deamon girl's championship. Until then we can listen to Rosemary's explanation about her unexpected run-in for save of Allie in this video and wait where all of this will lead us all: