We saw a pack of second-chance chasers (Kavita Devi, Toni Storm, Xia Li and Mia Yim), some of them successful, one of them failed again (sorry India). We saw an Alumna's return (Kaitlyn) and some new names debuting, including a great Indie veteran and icon (Allysin Kay). We had a really good look at the talents of WWE UK NXT, after the stunning performance by Killer Kelly in EP01 - now we had Jinny putting her skills on display against her fellow Superstar - the Australian sensation Toni Storm!

The episode was as always filled with dynamic and was limited byt the 15 min. timer for match, but all of the ladies gave 101% of themselves. 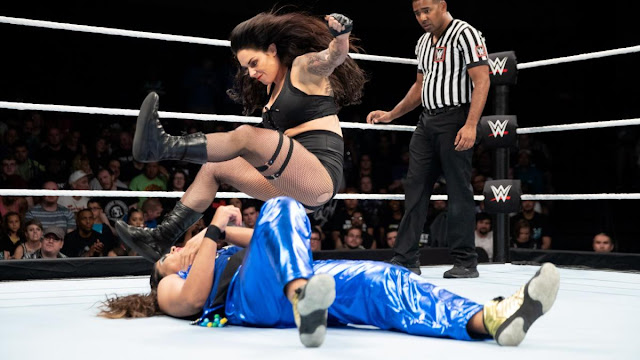 Every year we have one return. Lats year we saw Serena Deeb returns to WWE, this year it's Kailyn's comeback and I pray next year to see Melina ore someone else from the past! (mostly to see Melina)

Kavit Devi didn't had luck again, despite her well crafted strong style, she followed her fellow NXT recruit Reina Gonzalez's faith, losing to Kaitlyn. But not without a fight. I am really looking at Devi and the other international recruits wit curiosity and hope to see them in NXT, soon. Actually Kavita's career got it's pick moment these year when she and other International NXT women (like Payton Royce and Taynara Conti, etc) participated at WrestleMania's all-women Battle Royal (why don't they name it after Mildred Burke or other women from the past?). That's good! And we must respect the fact that this is her second MYC appearence as well, while other fellows from NXT like Vanessa Borne and Lacey Evans didn't make it (maybe because they are on TV, often). I am looking forward for these one and her foreigner colleagues, for sure!

She's still got it! As we know Kaitlyn had returned to the ring several years ago, after a break following her post-WWE career. Former WWE Divas Champion and facing many great opponents like AJ Lee, Beth Phoenix and Eve Torres, we can say that the Hybrid Diva had her legacy and contribution to WWE Women's Evolution. Actually we even hope to see her at the all-women's PPV! Meanwhile her appearance at MYC last week was something really strong as a statement and she proved that she still can kicks asses! It's nice to see her back and to know that she is advancing to the next round. 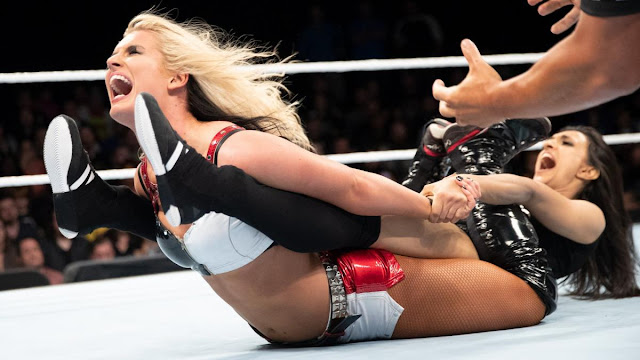 Wow! At first she reminds me of some of the skinny ladies, who have specific charm, especially one ECW icon- Francine! Man, that woman is so skinny, but don't let her appearance full you! Minutes later, that Fashionable UK dame kicked the hell out of Toni Storm, making us wanting to see WWE NXT UK's episode right now and to see more from that one, Killer Kelly, Toni Storm and even Isla Dawn (I am looking, impatiently for Dawn! What can I say? The woman who slain one of my greatest Idols (if not my all time favorite) Ivelisse, should have a lot to show, as well). But Jinny! Wow (again)! That submission and the way she locked it was fascinating! That woman has the desire and talent for wrestling and I really want to see more...

Toni Storm! Ultimately, stunningly, amazing talent and I am so happy to see her under open contract with WWE! That is historical on it's own - showing that the company is getting some development according to talents' contracts. I really hoped to see her friend Piper Niven signed to the UK brand (as well as Jazzy Gabert) and my hope and demanding will not stop, for a second! But let us concentrate on Toni Storm who had her second chance as well as several others. And she grab it. With her dynamic mixture of strong moves and quick hits and punches, unmatched athleticism there was no way for her to lose this one, despite the Jinny's great surprises during the both. The end was sealed with a great slam, from which there was no escape! 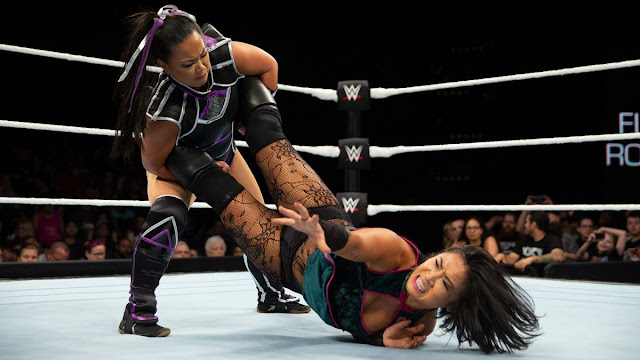 Two women with Chinese descend faced each other in a really hard battle!

Who is Karen Q? She is well known at the indie scene. She is the one who put an end of Kelly Klein's domination and winning streak... If you are curious what I am talking about go and watch some Women Of Honor, as well. It won't hurt your dedication and loyalty to WWE. So, I expected and received the expected from her. Really nice moves, great tactic and good debut at MYC and WWE ring, overall! I think that Q's involvement was a really great decision as the involvement of Ashley (Madison) Rayne, Priscilla Kelly and Allysiin Kay - real show of respect to the women's wrestling talent and indie legacy by WWE and Paul 'Triple H' Lvesque!

Xia is interesting for watching, knowing about her martial arts status! I am happy that this year she had a luck and din't faced Mercedes Martinez, as the last year. I think that WWE evaluate her allowing Li to defeat Karen Q! The finisher of the match, that kick was interesting, not a 'OMG!' finisher, but sort of effective. Xia sold every move really well and I respect that! I just hope to see more evolution in her style and to see her kicking butts on TV, every Wednesday night! For now I am waiting to see what she will bring to the ring in the next round! 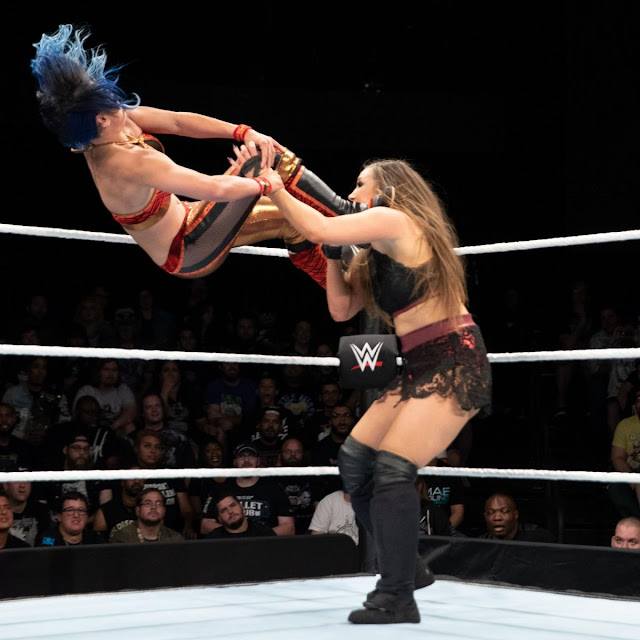 It's like watching an epic match in SHIMMER or SHINE, but on WWE Network!

As it was announced this match kind of revive these two old, indie and Impact rivalries. Because these two ladies had met each other, their paths crossed at many occasions with different success and both of them are already Legends, a real Icons in the pro-wrestling business!

Allysin Kay is a real bulldozer and she can just pass through her opponents like hot knife through butter! She was everything I expected her to be in that match - professional, well prepared and knowing her craft. I know that she had unsuccessful try-out with WWE, like her fellow former KO- Ashley Rayne, but who knows, maybe like Santana Garrett, Kay might be invited for matches in NXT or other WWE programs (with Rayne). She's a total hard hitting icon and we saw all that in this epic 3rd episode main event!

Guys, I love her! Since day one(ish)! She is someone who is grabbing your attention and you can see her as someone who will make epic thing in or out of WWE (I prefer in)! She is stunning... I don't have enough words to praise her. Last year she was really great against Sarah Logan and even losing to Shayna Baszler. This year she is more hungry and determinate to go far, than ever and you can feel that, through the TV screen! (Out of the bad extensions)

The biggest question some fans who have watched Yim in the indies, might be: Why she is not performing her trademark Small Package Piledriver? She use it in Impact Wrestling!... Yeah, she execute that power-demanding move perfectly and i haven't heard someone who sell it to be injured (we have Candice LeRae as someone who experienced the move and is still alive and healthy in NXT). WWE is afraid to allow the use of the Piledrivers set of moves. The move is even illegal in some states, because it is risky. Only, the likes of Kane and Undertaker are allowed to do it! So,eventually we won't see that beautiful, strong finisher in WWE ring. We have to enjoy her Eat Defeat kick-stunner, as some of us knows that every time she performs it, it's a kind of tribute to KO Hall of Famer Gail Kim!

We can't wait to see what will happen in the next episode, this Wednesday and will we finally see Io Shirai in action! We are near to the end of the Round 1!

And Evolution is around the corner!
(I MEAN THE PPV! THE EXACT WOMEN'S EVOLUTION IS ALREADY HERE. IT WAS DELIVERED IN SMALL PORTIONS THROUGH THE AGES BY THE LIKES OF MILDRED BURKE, MAE YOUNG, (EVEN MOOLAH), JACQUELINE, IVORY, MOLLY HOLLY, TRISH STARTUS, LITA, BETH PHOENIX, MELINA AND MORE AND MORE ULTRA TALENTED AND PASSIONATE ABOUT WRESTLING ART WOMEN)
By AWOW at September 24, 2018