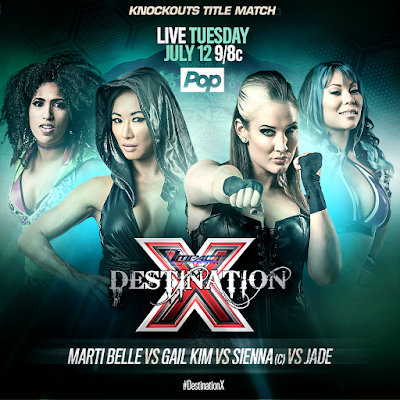 TNA is fighting for survival?!?

But what about their women's divisions?

OK. WWE had their division from a long-long time. Their women's titles history can be followed back in the '70s, '80s! The Knockouts title is young title! The Knockouts division existed before it, but it hasn't have that role which WWE former-Divas have. Even in their Bra 'n' panties days, they have their top prize - the shiny and gold Women's title, while the Knockouts fight each other just for attention and popularity.

One name. Two promotion changed by her.

Kim is the first woman, who won WWE Women's Championship in her first match, 7-Divas battle royal, eliminating one of the toughest competitor at the time - Victoria. Gail Kim is the first ever TNA Knockouts Champion. Legacy that deserved two Hall of Fame inductions. I mean not only in TNA's Hall Of Fame!

Now we have her involved in a Fatal-4-Way match with, not one, but three truly iconic indie workers - TNA Knockouts Champion Sienna (aka Allysin Kay), Marti Bell/e and Jade (aka Mia Yim). That is a great strategy and all of this will happen tomorrow. I desperately hope that this match will be more longer that the Street fight match, last week, between Jade and Marti. These four women can do a lot, leaded by Kim.

But is this enough for TNA to challenge WWE's women's division storylines? Actually, at the moment WWE has three interesting storylines in progress( NXT Women's championship storyline unvolving Asuka, Bayley, Nia Jax; Becky and Nattie's storyline; Charlotte and Sasha's Title storyline), while TNA's storylines varied from one to two and backward. We expect toe see four interesting matches in WWE/NXT: Bayley vs. Nia Jax; NXT Women's Champion Asuka vs. Bayley - the rematch in NXT; Becky Lynch vs. Natalya and Sasha Banks vs. WWE Women's Champion Charlotte, for the title in WWE's main roster. TNA has the advantage of famous female indie competitors counts.

My opinion that the both companies have amazing women's divisions and they are so different. WWE is leading for now, even without street fight matches. For me both companies are doing their best and it's worth it to watch them both!