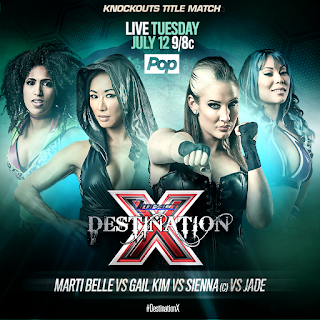 Sienna take advantage on the chaotic situation at the ring and pinned Marti Belle for another victory.

It was just nice to see all of these four talents working together, and Allie (Cherry Bomb), screaming at ringside. Well, her screaming was the annoying thing, about that match, actually!

At the end we can say that we enjoyed Sienna's victory. Previous weeks and month TNA showed us that they want some fresh air in their Knockouts division. They want some new faces to topped it. Jade and Sienna were that so desperately needed division's refreshment and now it continued.

Sorry, Gail, we know that you deserve another reign, but we hope that it will not be soon!