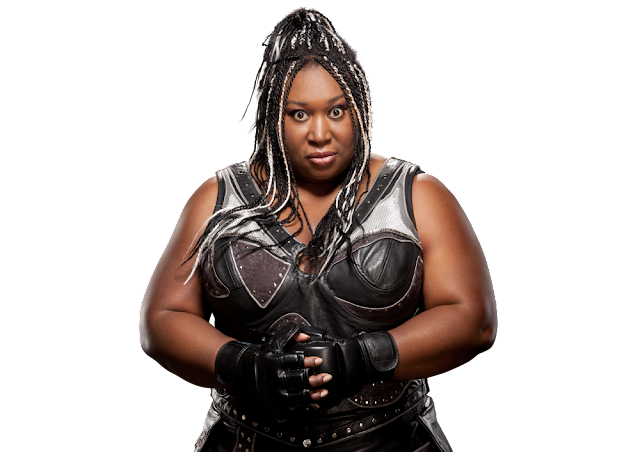 Awesome Kong or Kharma! You can call her even Amazing Kong! She is all of these - awesome, amazing, and even a sort of bad k(h)arma for her opponents! "Luckily", The Bella Twins (kind of) avoided her rage!


Her real name is Kia Stevens and she is well known as a legendary independent worker and TNA Impact Wrestling Legend. Kong faced many amazing talents, competed all over the world, won a hundred titles until she found her self in WWE - her dreamed destination. The dream turned into a nightmare. After stunning debut - attacking the retiring Michelle McCool and series of post-match ambushes, as Maryse, Eve, Alicia Fox, Nikki Bella, and Layla, fell as victims of her Implant Buster, she dropped the bomb: She was pregnant and she needed to leave the ring for a while, promising to The Bella Twins (who dared to mock her), that after a year she will give them the well-deserved payback!

A year later she returned surprisingly, to write her name into the WWE Royal Rumble history, as the third woman to enter the Royal Rumble match, next to 29 men. After that everything falls apart!

She had her personal drama. She had that terrible personal experience. The rumor says that WWE officials try to push her to return as soon as it is possible, but she was not ready! She was released!

Yes, back there then -Divas have a different status, then today's Women-Superstars! It doesn't matter if you have a miscarriage if you are sexually assaulted or beaten by your husband/boyfriend - when the officials order you to return you must return or you must leave! Oh, and if you know what you want, if you know your price and you are trying to complain about your status, you'll be fired!  I sincerely believe that this time is over... But the victims' list is too long! The obeying Divas had prospered (at a high price), the free-spirits were out!

Someone may answer: Why WWE should need another powerhouse when they have Nia Jax, even Asuka?

Just imagine two women-powerhouses clashing like Kane, Undertaker and Big Show had clashed in the past! That would be the battle of the Women-Titans! Awesome Kong may put the smallest competitors (not only in the women's division) on notice! They will have to work triple-hard if they want to defeat her... Kong will be the living, breathing, walking, and smashing test of strength, and similarly to Nia Jax, she will inspire her fellow Superstars to be more innovative.

I remember Kong's battles with Gail Kim! Even at the time I really wished to see them as remakes in WWE. it was sad that she wasn't able to face Beth Phoenix and Melina, too. But now if they hired her back, Kong will have a bunch of challenges, from the tiniest Alexa Bliss and Sasha Banks to the powerful Charlotte, Nia Jax, and even Asuka! As I mentioned in the previous article about Ivelisse, WWE is the epic top of many wrestlers' professional journey, and sometimes the road to it is a little bit harder. It's the biggest stage and it deserves the biggest names, to conquer it - like Ivelisse, Kong and the other 3, that waiting for their posts.

They are the biggest indie stars, they know their value, they used to do what they want, but some discipline will help them. WWE presents the highest discipline and constant schedule, some security, all you have to do is to put your priorities in order, to train and wrestle in NXT for a while, eventually!

Kong is a great wrestler and she is one of our "Missing names". We think that she and all of the others 4-women, that we selected will be an amazing addition and one step closer to the total perfection! So in the age of returning in WWE, it will not be bad to see her back, even in NXT, for a while!