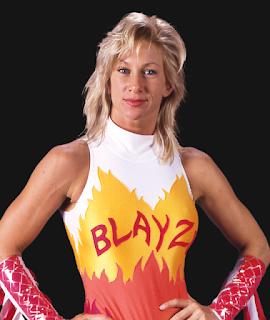 First: Who is Alundra Blayze ?

Aside from the fact that she is a WWE Hall Of Famer, Alundra Blayze is a former 3-times WWF/E Women's Champion and yes, she is the one who went down to WCW and trow her title belt in the trash and later became famous as Madusa.

Let's see one of her matches against the unstoppable Bill Nakano (accompanied by Luna Vachon) :

After her vindication as WWE Hall of Fame inductee, Blayze went a little bit "too honest" for some of the former-Divas. From comments for Sable "is she wrestled", in tables for three, to really vicious attack on Lita and Trish Stratus on the JBL's show WWE Legends on WWE Network.

Blayze is athletic. She was great and that's why she won the belt three times. She fought many great names, back there. But how is it possible to compare the dawn of the women's wrestling era with the Attitude and The Golden Era for the women in WWE?

I have respect for her! The women of her era, had exactly to fight with nails and teeth to get some attention and to win any title. But I grown up watching the end of the Attitude Era and the beginning, the peak and the end of the WWE Divas Golden Era. Alundra Blayze easily bring down Torrie Wilson and Stacy Keibler to "byword" ("We had our Stacy Keiblers and Torrie Wilsons in WCW"), forgetting that these two women were forced to learn how to wrestle, when WWE bought WCW in 2000-2001.

OK! Stacy and Torrie were not the greatest competitors of all times, but why did she attack Trish and Lita, for something they hadn't fault at all? For the per-exposition of their pretty looks!

Yes, in the Attitude Era, women's beauty and nakedness were used to sell. But you can't judge two of the really greatest women in WWE, who left their legacy and never throw away their titles in the trash. Two amazing competitors, who for real were on the right place, at the right time, but they evolved with a whole generation of women like Ivory, Molly Holly, Jacqueline and Jazz. To say that this women 'can wrestle a little bit' (Trish) or 'she has few moves' (Lita), this is arrogance.


In the Attitude Era, women were forced to be limited and not better than men. Except Chyna, maybe Lita who were involved physically with men, the other girls were just a sexy dolls or victims, thrown through a table. Some of them were even covered with sauces, like Madusa. When this age passed away, many Attitude beginners, didn't make it to the Golden Age, where people like Victoria, Jazz and Gail Kim bring more competition to the survivors of the Attitude age. Lita and Trish were there to elevate the changing division. With a lot of help from the likes of Molly, Ivory, Jacqueline, Stacy Keibler and etc.

Lita and Trish had their moments in steel cages, hardcore matches and more, so to call them less valuable and "not the greatest". To add insulting notes about who can and who can't wrestle, for me this was unforgivable. These two women sacrificed their bodies in every match, during the years, when Alundra was nowhere to be seen. These two women had a lot of respect for their division, for their colleagues, for their titles, than she will ever have.

Alundra Blayze is WWE Legend. But she is the embodiment of the arrogance of the old generation toward the next generations. This old generation, that brings down former-Divas like Beth Phoenix, Melina, Eve Torres by daring to compare itself with them. These are incomparable time periods, with different presentations of the women's wrestling, with their own struggles, always pushed backward! 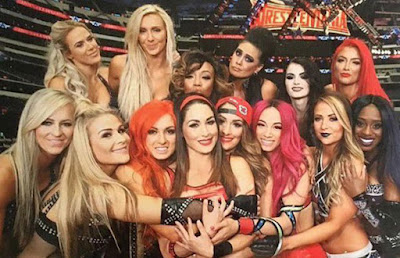 Actually when she saw the picture of the (almost) current division, she said something nice. That they are great and WWE is having eventually a new Golden Era. For me at this point WWE women's division is a little bit of a broken. With several names, not included in any serious action(Emma, Paige, Lana, Tamina, Alicia Fox). With 4 women show in RAW, and a almost whole division on display in SmackDown Live, where the Women's title change hands at almost every second PPV, with NXT stuck into Asuka's reign and the same old faces every week. They need to start this all-women's tournament soon, (why not in March?) to bring some new blood! And if they make show like 205 Live, for the women it will be nice.

Alundra Blayze can judge about her time and experience with WWE. If you don't have nothing good to say, then don't say nothing! With all of my respect Debrah Anne Miceli aka Alundra Blayze/Madusa, let the fans, the history and the legacy speak for itself! 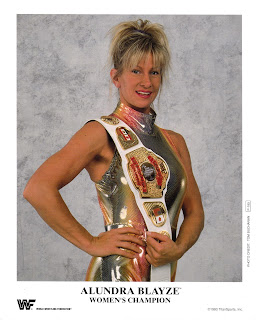 *The images in this post are from the free sources in Internet!