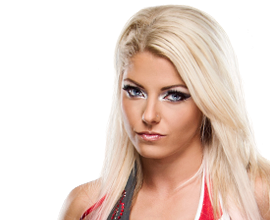 These days a rumor is circulating through pro wrestling news web sites: WWE officials are unhappy with Alexa Bliss!


Is it true or not, it was almost completely shadowed by the new Paige's scandal. Almost!

WWE officials and Universe praises her mic skills, but the authorities are unhappy with the lack of chemistry she had with the other SDL women, excluding Becky Lynch. So is she obliged to have chemistry with everyone? It's not always possible and it can be worked out. Many people cited her match against Mickie James last Tuesday as an example for not well worked match. I don't know - Mickie and Alexa spent almost two months as allies, not competing against each other.  What sort of chemistry do you expect? Alexa is not familiar with James and James is not familiar with Bliss as an opponent...

The praised chemistry with Becky Lynch was based on their NXT's roots and different training, while Mickie James worked her way out without being included in serious talent development program, like WWE Performance Center. Of course there will be difficulties to bring any chemistry between them -  they learned to wrestle in two different ways and now they fought in a total different way.

We think that her matches against Naomi, wasn't bad and both women were able to show some real athleticism. Actually Alexa is on of the greatest high flyers at this point and she can work over this for the future. She is tremendous heel (not like Charlotte, but near) and yes, she evolved after the draft -  Actually from the drafted girls, she and Carmella, actually got a boost, they really evolve in SD Live, while Nia Jax is sort of stuck in the squash matches and back and forth rivalry with The Boss.

She did her best and she needed time! We, in AWOW always stay clear about her early title win, that she needed more time. Now, there is this consequences of this rush push into the title picture. She's great, but she needed more work. Maybe at WM 33 we will see Mickie James or Becky or Natalya as champions, but Alexa's role will never be minor and we are sure that she will improve, whatever WWE officials don't like, because she is a fighter!
By S.K. at March 20, 2017