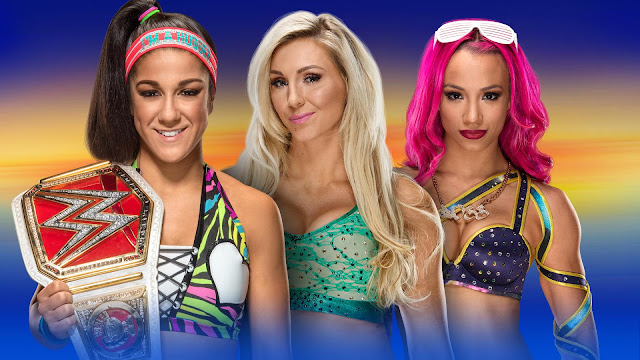 
After last night's events WWE RAW Women's Champion Bayley will defend her title on the Grandest Stage of them All, against her nemesis Charlotte Flair and best friend Sasha Banks.

The moral dilemma associated with Bayley-Banks relationships is getting deeper and deeper, thanks to Stephanie McMahon's interference. Sasha's interference on  Bayley's side, in a title  matches, makes The Huggers' title reign to look unstable and week... It's like Bayley couldn't defend the belt by herself, which is not a true! Of course Stephanie is pointing this fact fanatically. McMahon's intentions are more than obvious and she is not afraid to state that she doesn't like(kayfabe) Bayley as champion! She want Charlotte Flair as the ruler of WWE RAW women's division. She tries to destabilize Bayley's and The Boss' relationships and alliance, by forcing them to fight each other. 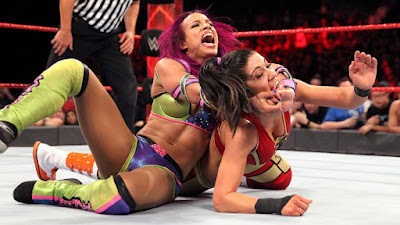 Sasha "surprising" return in the title picture was expected! There is no one there in RAW, who can stand next to Charlotte and Bayley for a match at Show of the Shows, except The Boss. Nia Jax is not pushed enough. Alicia Fox is far-far away from any title shot soon. Emma has problems with the creatives, who don't know what to do with her character. Paige and Summer are lost in injuries, movies, suspensions, etc. So, the only name, that is flashing in your mind as a potential challenger is the name SASHA BANKS! Sasha grabbed the opportunity, last night. Now she has the chance to even the odds, because she is equally talented and skilled next to the other two, familiar competition.

About the battle between two faces, last night... Many fans love to see the standard Heel vs. Face battle. But the core of the wrestling show is the competition. You have people compete, aside from their feelings and backstage relationship, and in the competition you have the element of sportsmanship. And this is the idea to send two friends in the ring, for a fare and square match and there is nothing bad in that! NXT already started to use this element of sportsmanship and competition during their shows in the Ember Moon's matches against Aliyah and Liv Morgan. All three faces and fan favorite. So it's nice to cross the lines of the tradition in the name of competition. 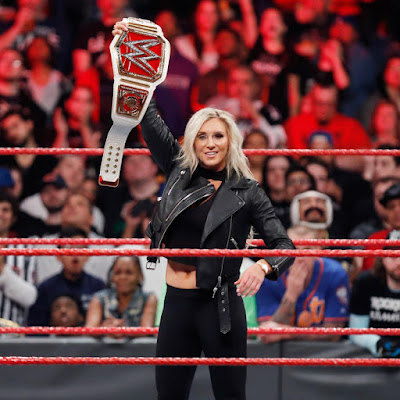 Charlotte's PPV winning record was broke by Baylay, last Sunday at Fastlane, but Charlotte still has the foundation for a WrestleMania Winning Streak!

We are afraid that Flair may overcome the odds and may leave the show, with the belt again. Only because WWE needs a woman who to have this record - the Undretaker alike WrsetleMania Goddess! And - I am sorry, but at this point Charlotte looks the only one who can fit this role. Her character, her heel dominance is the fitting piece for this goal. Yes, she eventually will drop the title day or a week after WrestleMania, but she will achieve what was desired - one big step near to the total equality between women and men in WWE!

The odds are almost equal - they are equal in the parameters like skills, talent, heat, but the biggest factor is the Authorities and the creatives desire and will. Charlotte didn't had any time off, from almost a year. Like it or not she was there in the ring competing, while her opponents really had their injuries and time outs. So, the Authorities and the creatives have every reason to push her to another win at WrestleMania!