LET'S TALK ABOUT NXT, NIKKI CROSS AND THE EMERGING AND MISSING (OLD)NEW TALENTS 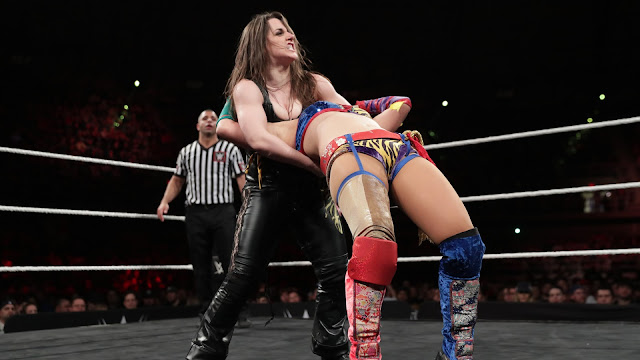 All sights are set on Ember Moon vs. Asuka's title match at NXT Takeover: Orlando, at April 01! Yes, we've been waiting for this clash since Moon's debut last year. But today we decided to concentrate on several new and old faces, some of them working on a storylines, others - seems to be forgotten in the shadows.


I will start with Nikki Cross.

When I first watched the debut of her crazy gimmick, I wasn't impress, but now she worked hard to make it more attractive, and working with the SAnitY is helping her to receive some heat. Her appearance in the previous Takeover, was one of the greatest moment in her career at this point, and she shined on her own, as equally talented and skilled Superstar next to Billie Kay, Peyton Royce and Asuka.

Nikki is a really good addition to NXT and SAnitY. Her signing was one of the greatest decision of WWE/NXT's officials. We'll be happy to see her more and more involved in rivalries in NXT and eventually to win their Women's top prize, this or next year. They must be confident in her, because she has a solid legacy, nice technique and well developing character - that's a guarantee that she'll make a good champion. 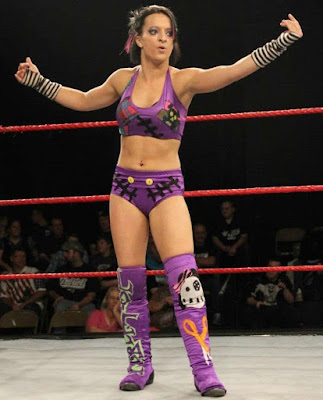 I know her as Heidi Lovelace from SHINE, OVW and SHIMMER and etc. When the news break and spread out that she and several others amazing female talents are signed, we get to know her with her birth name Dori  Prange. These days, at live events she is known with the new ring name - Ruby Riot.

Tattooed body, punk style, not a typical Diva-like competitor, Prange looks like another wave of fresh air in the glamours (sometimes to boredom) world of WWE. This week she even surprisingly debuted  at the episode of NXT, at Wensday, which means that she has made a very good impression, and they decided to push her, kind of. Her attack on Cross make me hungry for more from these two. At one point I can see them as allies - both involved with the SAnitY (why not - if you can't beat them join them). The idea to debuted her is really good and I hope that they will work on a evolution of the storyline between these two. You know I love to see new faces and debuts! 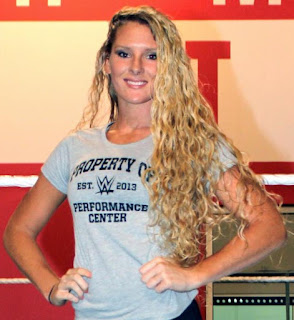 Former soldier, with discipline and great physics, Macey Estrella is definitely someone who can accomplish a lot in NXT, why not in WWE at all! You remember how impressive she was on Breaking Ground, when she made her emotional promo during the week of the PC tryouts... she's got it! If you open her Twitter account you will see that the fans adore her.

Actually, her re-debuting gimmick is not what I expected. I expected to see her debuting like a marine soldier alike! This lady-model-like gimmick is strange for me - with this muscular physics, she is more like a woman warrior or fitness-competitor. Maybe I need some time to cope with it... but at this point it wasn't what I expected. In this match against Nikki Cross, she wasn't book to show some technique, but she did her jobbing work, very well! I can't wait to see her joining the main roster of NXT and fighting her way to the title picture! 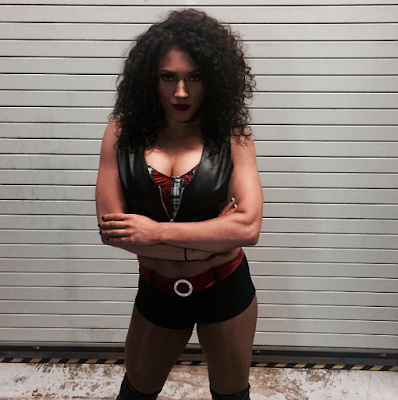 Yeah, where is Danielle Kamela? I checked IWD, and there was nothing from her for almost two three months. I hope that they are training her for something good, like a first storyline eventually or nice match against top competitors like Billie, Peyton, Ember, Liv or why not Asuka?

I like Danielle! Even her name is good and never previously used... Her skills wasn't bad and that gorgeous exotic look that she brings, reminds me of Layla, at the beginning. I don't know why they keep her in the shadows, I hope they are doing this with some creative purpose... 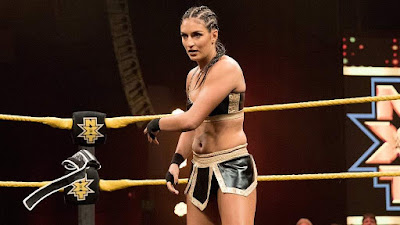 Another one with delayed NXT main roster debut is Daria Berenato.

She almost entered the official  list and disappeared, back  into the carousel of live events shows. I like her MMA gimmick. She looks nice and work well. Why did they delayed her adding to the NXT's official roster? Lack of creative ideas? Send her and Danielle to job for Asuka, Liv, Ember Moon, Nikki Cross, The Iconic Duo, Aliyah... You have a bunch of opportunities and really stick in the nowhere, division, who needs to embrace new female talents, even in the form of jobbing.

Daria is a nice suggestion for new addition to NXT, full time. I am so sad that I don't have a chance to book her. She deserves more TV time. 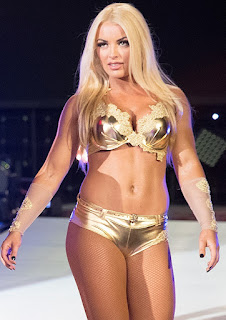 Talking about Daria... where is her fellow from Tough Enough Mandy Rose?

The Golden bombshell is missing on TV, from a quite long. She just entered a short lived rivalry with Ember Moon and one tag team match, next to Daria, plus sporadic appearances. She's stuck in the live events, too. Well, it's good for her, to develop via appearance in these events matches, but Mandy is good enough to be used as a annoying beauty, with a lot of self-confidence who flies head-high in the skies and challenge everyone.

NXT may find a lot of use of some pure sex-appeal, with some nice wrestling moves as addition. At this point where Asuka's and Ember Moon's battle is in it's peak and eventual end at Takeover: Orlando, it's not bad to think of other supporting women's rivalries. It's all about chances and NXT has a bunch of female talents who needs chances. 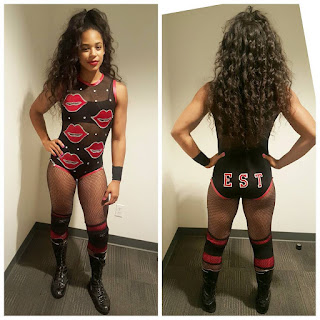 I am really curious about this one - Bianca "Binky" Blair!


She looks ready for action with her powerlift records and background. Her faith is similar as Danielle's, at this point. Nowhere to be seen! It's sad to not debut her, yet and it's not a very nice sign. While Danielle received several TV matches, Blair is still in a stand-by mode. I am afraid that WWE will not even give them a chance to be part of a storylines, because now they have, many women's talents who are training and refining their skills. It WWE hasn't realize their idea about the Tournament, eventually many non-debuted or two televised matches women, may found themselves out of the company! I just hope that I am wrong and that they are preparing Danielle and Bianca for something good. We in AWOW are hoping to see the all-women's tournament and follow up eventual show, because it's sort of a saving boat for these talents.

We will mention Kimberly Frankele /aka Kimber Lee/ and  Mary Kate  /aka Andrea/, two former indie legends who are finaly where they belong. We can't wait to see them in action. We hope to see Sarah Bridges, soon in more TV action, instead of jobbing for Lana, at life events. As I said NXT and WWE got a bunch of really amazing talents and they need to find the way to give them a stage to show their talent for wrestling.

#WeWantWWENXTAllWomenTournament
By S.K. at March 23, 2017