After two great debuts at SmackDown Live, we are heading back to RAW! 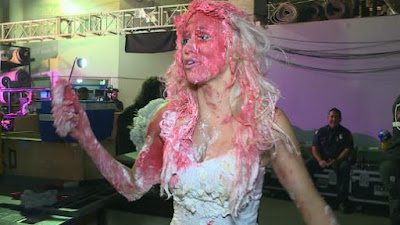 The Ravishing Russian was put on dysplay this week, as a "victim" of Roman Reigns "cruelty"!

Actually this angle was sort of fun. Lana's hysteria was funny. Her jump over the wedding cake was funny. It's nice to see that lady involved in her husband's rivalry with Reigns. Accompanied Rusev is not enough for her character, she needs more action and this week she get some.

Actually I prefer to see Lana in the video like "Look who is training in the Performance Center, with Nikki Bella". I know that she had several appearances on NXT Live Events, but I think that she can participate in a Mixed Tag Team matches with her beloved Rusev (as beginning). Her Wrestlemania moment wasn't that long, but she still has what it takes and if she think that she can do it, I think that she will be one tough challenge for the other women in RAW.

All she needs is more training and will to do it. Of course she can stay as manager, that suits her well, but she has a lot of fighting spirit in her, which doesn't need to be wasted, only on valeting her husband! 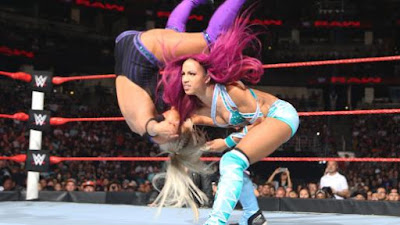 Some people may disagree with me, but the WWE Women's Champion "The Boss" Sasha Banks' match versus Dana Brooke was great! Of course Sasha's title win was the greatest, at this point, but this week's match was really good.

It was pure pro-wrestling, without many fancy moves, with very simple but effective end. For a difference Sasha didn't make Dana tap-out! She pinned her after pretty and simple double knees in Brooks body, layed out in the corner, on the second rope. Oooh, and Charlotte's accidental slap across Dana's face was priceless.

But I admire the stipulation of the match. It was the biggest part. Now we are sure (for the moment) that Dana will be banned from SummerSlam. Of course in WWE you never knew! I enjoyed that the match had a stipulation and was that simply and effective constructed.