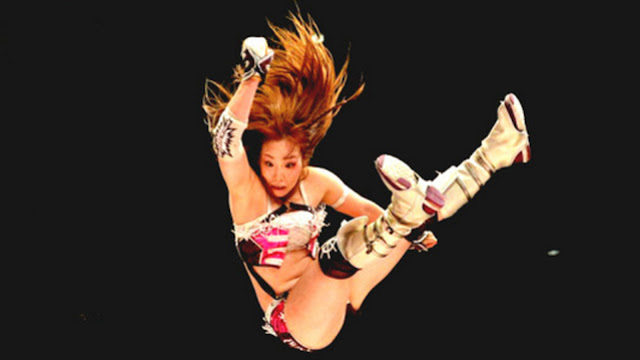 From Asuka in WWE NXT to Sumie Sakai in ROH. Japanese women started their invasion on separate waves, embodied the spirit and tradition of Japan - a highly patriarchal and closed culture. But all these famous pro-wrestlers fought hard battles to become Superstars in their native land and then to be called in the 'Bad West' and to make some name for themselves and for Japan's honor and fame worldwide.

Today we are looking at several really great names, who break the barriers between East and West, not just crossed them. We will talk about the problems that surround these Japanese sensations appearance in the USA.


Kairi Hojo, better known with her new name Kairi Sane in WWE.  Her signing with WWE makes a lot of pro-wrestling media noise similar to Kanako Urai/ Kana or now known as Asuka's signing! Some people speculated that Hojo will be forced to leave her Diving Elbow drop, which is more execute with more leverage, positioning the body in a really high and sharp angle, than the usual fall and hit with an elbow,(as you can see in the picture) because it was Bayley's move. Bayley's established finisher is Belly-to-Bayley. The Hugger's Diving Elbow drop can't match Kairi Sane's version of the move. Other news is even more serious - that Sane was suffering head and neck injuries during the taping of Mae Young Classic and that is putting her appearance on the finals, in a question! But besides these rumors, Kairi participates in several Live events earning victory after victory.

Hojo (birth name Kaori Hosako) is one of the WWE's perfect investments in the last few years. Multiple time champion in Japan, have been facing many of the USA and UK famous names, from the Indie scene, she is ready to build a legacy of her own. For the first time, WWE was able to grab a chance and sign a really amazing star, who other promotion missed to sign. I'm talking about Lucha Underground, where Kairi debuted as a part of the Black Lotus Triad under the name Doku. LU who always barging around how original they are, how their women are making a real revolution, missed the chance to attract three of the Japanese hot female names! Well WWE didn't make that mistake and they signed Hojo, as soon as she was available and it looks like they are not willing to lose her.

Injured or not Kairi Sane is valuable and is on her way to write her name in WWE's history, while her fellow Japanese star Io Shirai (real name Masami Odate), didn't have that luck.

Odate was really impressive as Hitokiri, the third member of the short-lived Black Lotus Triad, who defeated the evil Pentagon Dark. Her epic jump from the top of Cueto's office is one of the greatest stunts performed by a woman in Lucha Underground. But LU missed to sign her.

itThey signed Odate but short after that when they found that she had a neck injury. Odate was cleaned by the medicians, but WWE decided that they don't want to risk with talents who have concussion issues or neck issues, so she was released.

Here we have a huge controversion because Kairi Sane is reported as having both types of injuries, but she is still with the company, while Shirai (Odate) is released having one of the two and being clear to compete. Japanese Joshi puroresu, women's wrestling is highly risked and these young women are having a lot of injuries during their careers. Actually, they enjoy the taste of danger and the injuries are not something that will stop them from living their dream and walking their path. The pain and the wounds are part of their life as pro-wrestlers. WWE or anybody can't hold them from taking a risk because this is their style of wrestling. By stopping them to do what they love, they will cut their wings and damaged them even worst than the injuries. Japanese girls like Shirai are like a kind of female Samurai, honored to almost 'die' in battle! We are sure that Shirai was able to do a great tag team with Sane, beside her past neck injury and etc. But it wasn't meant to be!

If you open any Japanese women's wrestling promotion web page, you will feel like someone who is sneaking into a school yearbook! Most of the talents like Kairi look like schoolgirls on the way to graduation. That is one of the Japanese desires and hidden passion, not only Japanese. More innocent and young she looks, more desired and attractive she is and if she is a vicious fighter that is even great. But there are and these amazing mature women, who look older, but are still masters of the game!
Sumie Sakai is someone who is 45 and doesn't have Sane or Shirai's 'young and innocent' look, she is a respected Japanese veteran, who divided her wrestling career between her home country Japan and the USA. She trained Judo, participate in an MMA fights, and have won a lot of Championship in different promotions. Currently, she is signed to ROH but appeared in SHIMMER and WSU as well. Sakai is a really talented and ageless competitor and a good acquisition to every roster.

Ayako Hamada is someone who you really don't want to miss to see competing. Former 2-times TNA Knockouts Tag Team Champion, Hamada is someone who had work for many Japanese, American and Mexican promotions, like CHIKARA, SHIMMER, AAA, All Japan Women's Pro-Wrestling, etc. Multiple times champion and real legend, she is a sister of the first AAA Reina de Reinas Champion Xóchitl Hamada and even won the belt on March 19, 2017, 18 years after her sister's inaugural victory. I was kind of disappointed that WWE didn't call her for MYC or maybe they did, but she refused. There was a rumor that Hamada doesn't want to be fully, exclusively signed for any big promotion, maybe that's why WWE, GFW: Impact Wrestling and ROH, even Lucha Underground, are not messing with her.

Actually, it will be nice if WWE makes a compromise for her and Kota Ibushi and signed them as an open-contract Superstars and use them for specific events and taping.
We can't miss the Empress of Tomorrow in an article about Japanese women's wave. Asuka (Kanako Urai) with her 507+ days NXT Women's Championship reign, already has erased any borderline between men and women's wrestling, East and West traditions, and elevate the USA women's pro-wrestling stage to a new level. Asuka with Shinsuke Nakamura and Hideo Itami opened the door for new Japanese talents, after years of poor booking and signing of these kinds of talents. They revive the Japanese tradition in WWE that the likes of Bull Nakano, Yokozuna, and tag team Kaentai created at different stages of WWE/WWF existence.  Undefeated and overconfident, with amazing powerful style with ultimate submissions set of moves, The Empress proves to be one of the Greatest world wide Japanese names. Her freshly announced injury will not stop her for a long time and she will return ready to conquer new horizons, why not in the main roster!

Desire to take risks is contrasting to these women's traditions in discipline and ethics. But the injuries are just a part of the issues - the homesick, language barrier, and culture shock are other problems, that these Japanese sensations are dealing with. They fight their problems, with the intensity that they fight their opponents in the ring. So no matter what the future holds, these and many other names will be remembered if not in the USA, maybe in Japan, for sure. Until then we can enjoy watching and following their careers and screaming OMG after another risky move is performed by any of them! 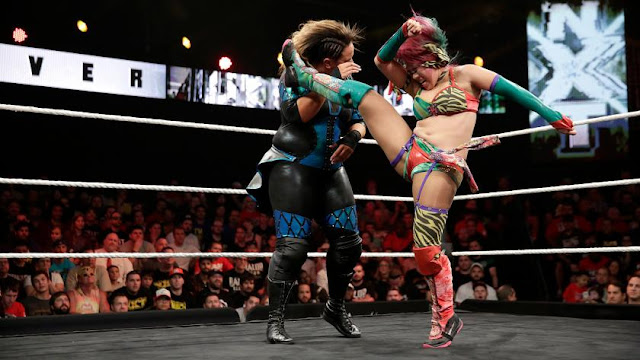