WWE EVENTS WEEKLY OVERVIEW: FROM RAW TO NXT - A WEEK OF NON-MATCH SHOW-STOPPERS 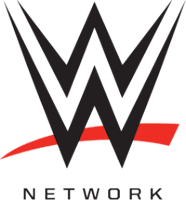 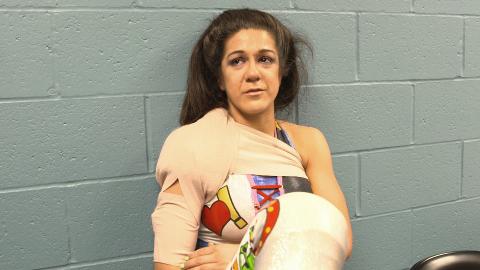 This week in WWE was full of events and matches. Some of the interesting things in all of the RAW, SMACKdown Live and NXT, happened outside of the ring or battle.

We had a event changing injured challenger, suicidal wish by a Ravishing Superstar and finally The Moon Eclipsed the Sun in NXT!

Let's check them one by one. 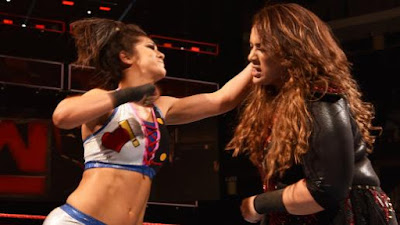 BAYLEY VS. NIA JAX.
ANOTHER SEQUEL WITH BAD ENDING


The week started with another sequel to Bayley vs. Nia Jax's rivalry. That rivalry was always was sort of a secondary, reserve plan rivalry. When fans get tired watching Bayley fighting against Sasha or Alexa Bliss, they got into Bayley facing the odds against Nia Jax.

When I need positivity in my life, I try to find some segment or match with Bayley. We, in AWOW, love Bayley. From her entrance to her Belly-to-Bayley, there is only POSITIVISM that stream from her appearance. Believe me, these days we need every ray, beam of positivism we can find! Actually this week, the luck wasn't with Bayley despite her smart win over Nia Jax (even vis count out - believe me, the count out is the only more logical way to beat someone like Jax. Naomi prove it, last year at Survivor Series. Bayley prove it this week).

Bayley is injured! That changed a lot. According to WWE.com update is about another medical exams, the forth coming Monday. We are on the edge of our seats, but we have a theory that we will share later. For now we think that legitimate or not this shoulder injury is putting Byaley's appearance at SummerSlam on jeopardy! 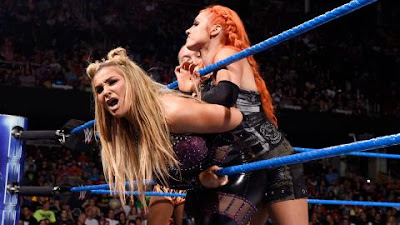 A beautiful technical tag team match between four heated competitors. All four of them were in their top shape and did the maximum of their abilities, in that kind of match. We had the usual 'I can't reach you!' tag team drama, some tag maneuvers.

I enjoyed Naomi's performance. She escaped from Natalya's Sharpshooter and reversed Carmella's Code of Silence into her Feel The Glow submission, for the victory. Really impressive. Can't wait to see what will happened in their match at SummerSlam! 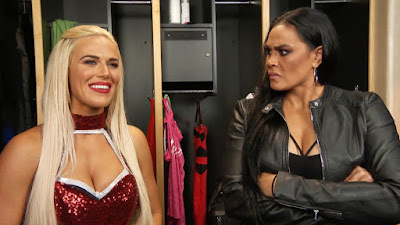 Meanwhile, in the locker room, we had another 'dramatic moment' between Lana and Tamina. Their alliance started tho crack, after their tag team match last week, where Charlotte Flair was able to knock down The Ravishing Superstar with a vicious kick. This week it looks like the kick had it's physical, brain damage on Lana, because she ravishingly-joyful announce to her shocked, on-the-way-to-become- former, ally, that she is challenging Flair for a singles bouth, next week!

Weeell, that is what we call 'Death Wish'! 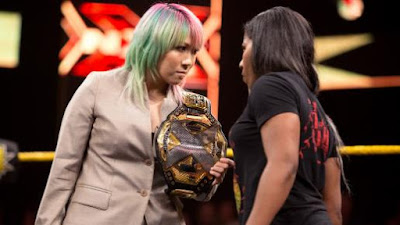 THE MOON CONFRONTING THE SUN

I enjoyed this week NXT!

Oh, not because of Sonya Deville's short match against some former or current MMA fighter, who played scared girl, most of the time, despite her huge muscles. More huge than Devills. I am happy for Sonya, that she had a match. But her appearance wasn't the top moment.

I think that Asuka and Ember Moon's segment was the bets moment. For me it was the best moment of the week. These two women made a great promo of what we can expect on TakeOver: Brookly 3! We had a taste of what is coming. At last Ember Moon used Asuka overconfidence in the right way, catching the celebrating champ off-guard and executing a picture perfect Eclipse (actually Asuka take the move kind of strange. Maybe there will be some attempt for her to escape the match due to physical injury angle, which will not work. 'William Regal: Asuka, I am so sorry that you are not able to defend your belt, so I will take it from you and I will put it on the line in a Fatal-4-Way: Peyton Royce vs. Nikki Cross vs. Ruby Riot vs. Ember Moon'-imagine that).

We in AWOW, are expecting more heated, more full of turns and more aggressive battle (almost) on Life and Death. We still hope that Ember will take the belt (maybe on the 3rd attempt), because she is the perfect heir to the throne.Don't forget that Asuka is on her way to cross the 500 days reign length.

At the end -  we have almost two full weeks waiting for too many peaks in storylines. This summer will be hotter than ever!