AWOW EXCITED: LOOK WHO'S ON A TRYOUT IN WWE PERFORMANCE CENTER? 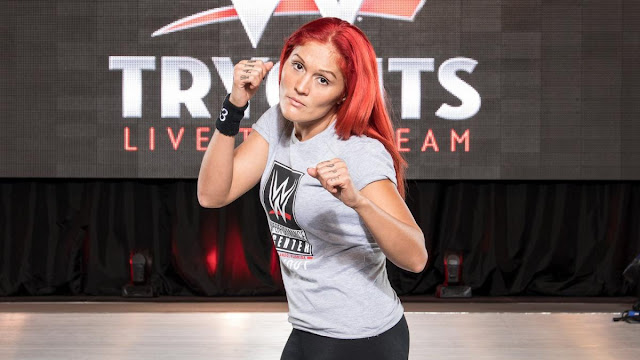 After years of not acknowledge her talent, because of troubles in the past, WWE finally decided to do another step further in their growing up as a company that can deal with the past and concentrates on the present. Finally, they decided to reconsider and put talent over past issues.


I think that 99% of you, who are real women's wrestling fans knows who is Ivelisse Velez. She is former Tough Enough contestant, who was forced to leave the competition, due to injury. Despite that she was signed under contract and reported to FCW - then WWE developmental territory. Then, under the alias Sofia Cortez she was famous as a part of the stable The Anti-Divas, teaming with another favorite wrestler Paige and Raquel Diaz (the daughter of Eddie and Vickie Guerrero).

When WWE reformed their developmental territory and rebrand it into NXT, Ivelisse (still known as Sofia Cortez) had a taped match against Paige, which she won. In her second televised match, she defeated Natalya, who attacked her.  Then she was released! Her last match was in a losing effort against Tamina.

It was said that Ivelisse and several other wrestlers were released from WWE after they accuse the trainer Bill DeMott in harassment.

Do you know what? The topic of harassment is sensitive for WWE they didn't like it back there and they were willing to sell their souls to the Devil, instead of taking a stand against it. They tried to bury these type of scandals (like Steve Austin harassing Debra). I tried to stay neutral and now I will say it: I DON'T THINK THAT IVELISSE OR THE OTHER GUYS WERE LYING! I really think that they were harassed.

There is no logic, when you are finally on the place where you want to be, to come up with a 'harassment' scandal! Why? To earn heat? Really? We are not dumb! They fired her, sacrificed her back there in those divas days, where the company was darker and shady behind the ring!

Ivelisse made name for herself! She is not just Icon, she is already Legend on the indie scene. Fighting around the globe. Finding a place in Lucha Underground where she fought men and women.

Now it's time for redemption!

They owe it to her. To us. To themselves. They need to show us that evolution and progress that they are showing us! That talent and experience worth more than look and (WWE) mistakes.

WWE!!! No punishing booking. No Jobbing. Sign her as she is: One of the BEST in the world! Treat her like you treat Asuka because this lady deserves it! She's a rare diamond and you must not miss her! I am not saying this only as a fan, I am saying it as an analyst who looks beyond the gimmicks and storylines, who looks at the complexity of it all.

Ivelisse, if they don't sign her this time! Don't give up! Follow Ember Moon's and even Paige's examples - both of them weren't signed in their first tryouts and look how far they go.

Respect for Ivelisse and WWE - make the miracle happened!