WWE SHAKE-UP BONUS POST: WHAT ABOUT NIKKI CROSS?... WHO WILL PLAY WITH NIKKI? 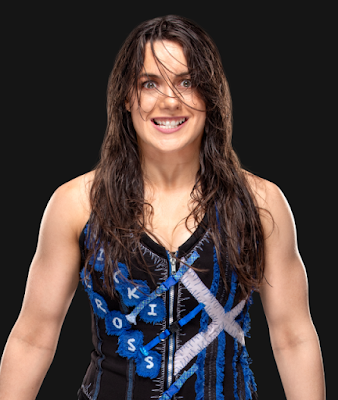 Okay! But where is her playground?

Is it painted in Blue?

Or Yellow mixed with some Black?...

Where is Nikki in the whole Shake-Up Picture?!

That is one of the many exciting questions that WWE Shake-Up brings to us. Next, to Sasha Banks absence, the Riott Squad's future, what's next for all WWE women's divisions...

We decided to think about where is this Twisted Sister, needed?

She has a character. She's a great wrestler with her own style. She's someone you can rely on for a great battle against anyone. She's ready for everything and everyone. Everyone looks like they are not totally ready for her 'craziness'.

Free Agent! She can't be a free agent all the time. She's not an Alumna. She is more than a rising star, but she is still on her way to becoming a Superstar on the main roster.

So where is she needed the most?

Well, there is some space freed after Lacey Evans assignment to Raw and Kairi Sane's transfer to SmackDown Live, but come on -  this page is closed! Nikki Cross takeover NXT and even without a title reign in there, she is done with the developmental show. She is beyond development - she is developed since day one(ish)!

No way to bring her back! She is on her way to one of the Main brands. But which one?

I have described to you how I see the situation on Raw women's roster - In development! Lacey Evans is the only Superstar at this point who gets some serious heat, thanks to her rivalry with Becky Lynch and the title shot she earned after defeating Natalya!

I don't want to see Nikki on Raw!

'Wait? You said that Raw is nowhere at this point, except for Lacey Evans who has a direction... Isn't she needed in the Red brand?'

To be needed and to be suitable are two separate kinds of stuff. They can use her as a Free agent... but I really wish to see her in...

There we have a big talents pool. Raw will be fine. SDL needs more Shake-Up! Retribution for the years of eye candy looking division, that bites the Raw's dust, most of the time.

Nikki will bring chaos on the singles stage and will push many women to their limits. I want to see her taking out the best from Charlotte Flair, Ember Moon and The Man- Becky Lynch. Her unique gimmick (like Moon's) allows her to be flexible and to challenge everyone.

Bring her to SDL!


BACK ON 'THE FREE AGENT' THING:


They might continue to use her because of the upward reasons: Raw is looking bad (except for the Lady of WWE) and SmackDown Live is totally shaken-up in a stunning, attention-stealing way. So eventually, they will use Nikki as a wild card/free agent for both brands which is sort of compromise. I don't like it, I want her on SDL, but... when I wrote the upward rows I started to think that maybe, somehow, she might continue to work as a free agent for a while i.e. until the things get more concrete, solid in both brands. Until everything gets back to normal and everyone calms down.

After that, I want to see her in SmackDown because I love the momentum that the Blue Brand received. She'll fit there at 101%.


BONUS IN THE BONUS:

What about ... just think for a second... What if Cross joins WWE NXT UK?!

She'll be near home. She will have the door open for other WWE brands as well, but she'll be exclusive. Brave and crazy, eh? Even crazier than brave 😁😁😁...

There might be such a possibility, but I think that it might become a reality when her role in WWE's main brands is played-out. Then they might send her in a sign of respect to win some gold in the UK and to end her WWE days near home.

For now, I think that we still have a chance to see her as a guest star on WWE NXT UK, messing with Rhea Ripley, Jinny, Isla Dawn, KLR, etc. even with the champ Toni Storm!

So that's all, folks! We just had a 'brainstorming session' and we hope it makes you think about the topic and have your ideas as well! Share it with us on Twitter or Facebook, or even in the comments in here!

Feel totally free to do it!