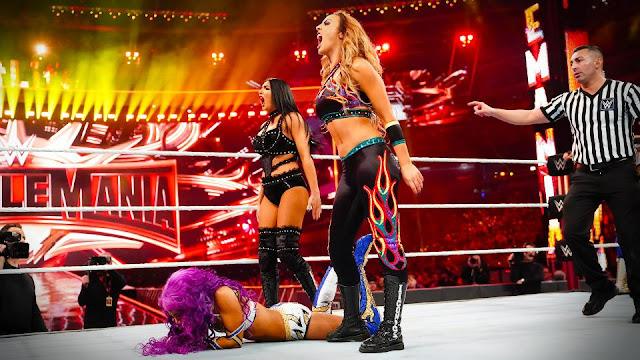 That was the match with surprising but kind of expected and wanted end. Somehow we felt the need to see someone fresh at the top of the developing WWE women's tag team division. Someone who's not fitting on 100% in the role of heels, but they are not faces either.

We have an ending that is actually an opening for more entertaining title reign.


The Champs: Boss 'n' Hug Connection were in their top WrestleMania shape. They proved to us that they could work as a team and can hit moves as a team. We expected what we get from them. A competitive match. Their swan song as a tag team titles holders were on it's heights. They stood strong and dominated. Praise for them.

The Samoans Slaughterhouse... Hm. They missed the beginning of the match. Then they made a return, just to be kicked out again. The interaction with the IIconics, was the only memorable moment related to them in that match.

Beth and Natalya added some old school experience. Double Sharpshooter. Diving Glam Slam. Actually I expected them to do that submission and the 'Cry, Sasha, cry' segment on Banks. Remember it? The one where Natalya locks the likes of Kelly Kelly and Alicia Fox in the past and Beth pushed the microphone in their faces asking them to cry louder. Banks was suitable for this role, as Bayley was the perfect victim of the Diving Glam Slam. But I think that no one... okay almost no one wanted them to win. They just add more suspense in the battle and it was nice to see the returning Glamazon throwing moves.

The IIconics. They started the match taking bumps as usual. Almost looked destroyed by Nia Jax and Tamina at some point. They did a lot of what they are doing best - taking some beat down. But the end!!! I saw Kay falling from the ring post and I didn't realize what she had done. She tagged herself in, while Beth Phoenix were going to apply her top rope move. It was surprisingly shocking and brilliant. Then the rest is history. Kay pinned the unconscious Bayley and here they are as the newest WWE Women's Tag Team Champions at the Grandest Stage of them All.

I have written in my post about the (then still not confirmed) inclusion of the IIconics in this match, that they are not the typical heel team - like the Samoans Slaughterhouse, for example, but they are not babyfaces as well. Their win is a sign of really vital change for that belts and we are sure that no matter how long this reign would be but it will be entertaining at 101%. I am curious who will step next in line. Aftre the rematch of course.

Finally, these two young women who walked a long way to this moment got they deserve. Some gold!

Overall, the match was great. There were a lot of drama and action in it. Every team had its line of action and stand. It was nice addition to the card and gave us the first most wanted pair of winners of the night.