TNA'S "BOUND FOR GLORY" IS OVER. THE CONSEQUENCES 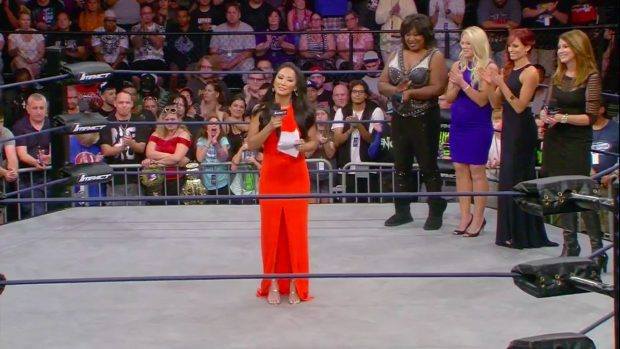 What a night for Gail Kim it was!!!


Dixie Carter, Awesome Kong, Christy Hemme and Taryn Terrell went down to honor her! Her inclusion in TNA's Hall Of Fame is more than deserved. At least someone honored this amazing talent with a place in their honorable roster, when the other who jump-started her career, didn't include her even in their Alumni section (what a shame, WWE).

TNA continued with the presents for Gail...

Gail ended the night not only with Hall of Fame inclusion! Most importantly she won TNA's Knockouts title!!! Anyone surprised? No? All that title exchanges and short reigns lead to this point  - the point of record tying title win. Another well deserved reign for Gail Kim! It's all about her and we are already get to live with it!

Yes, the Knockouts Championship was turned into low rating belt that everyone could have if she want it badly enough. Now it received it's glory, partly, as Gail owned it! Nothing interesting about it, at this point.

At this point, the veterans Madison Rayne and Gail Kim have the role of newcomers step-stones and characters developing employees!Nothing wrong with that! When you reach the top of your career, you bring yourself on a plateau. You can walk in a circle on the top of that plateau or go-down to the sunset, as a legend or famous alumna! But before that you can help the others.

We are more fascinating about Rosemary and Reby Hardy's fights, about Lauren Van Ness (it sounds like Van Ass, when the commentators are speaking) better known as Chelsea Green, we are thinking about Allie's future role and feuds, Jade, Marti and Sienna, all that Brandi Rhodes and Maria Kanellis-Bennett's thing. These are the women who are really interesting for us. The stories and characters we can't wait to see evolving.